What was Banned in Riga – Flowers or the Usage of Soviet Symbolics and the Ribbon of St. George? 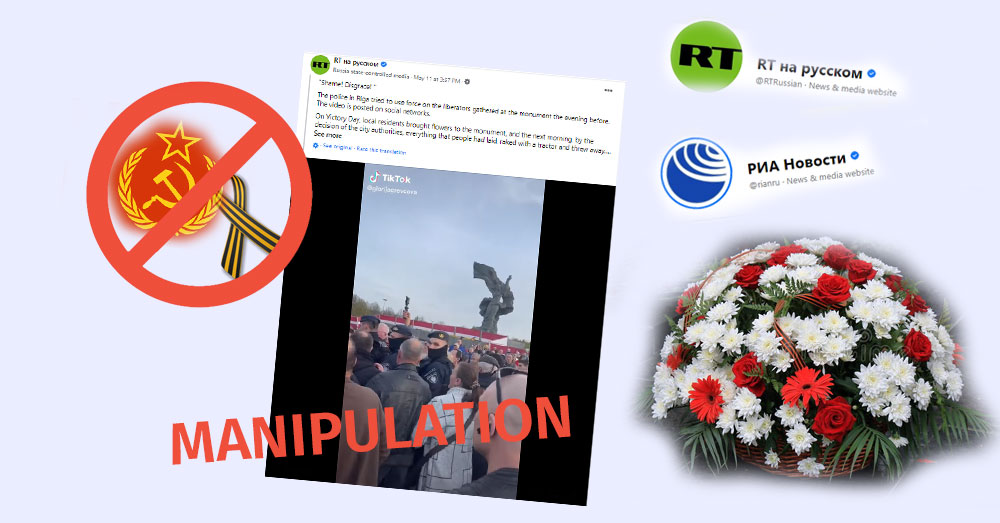 On May 11th, the Facebook page of the Russian news agency ‘RT на русском’ posted a story about the celebration of Victory Day over fascism in Riga on May 9th  and 10th. According to the story, the participants gathered at the “Monument to the Liberators from the Fascist Occupiers of Soviet Latvia and Riga” were violently dispersed by the police and the brought flowers were removed using a tractor. The story also noted that the next day a number of residents gathered again, brought flowers to the monument and sang “Katyusha”.

On May 10th and 11th, RIA Novosti also claimed that the Latvian government had taken away the flowers delivered to the “Monument to the Liberators” by a tractor, while the “barbarism” of the government angered the citizens, who re-laid flowers at the memorial the next day.

The posts create the impression as if the Latvian police dispersed people gathered to celebrate May 9th for delivering flowers to the monument. 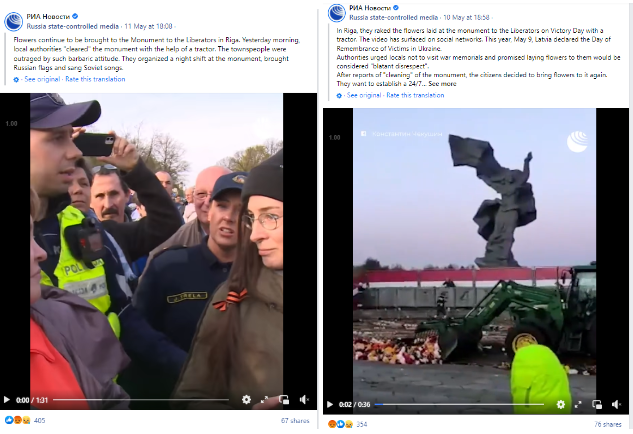 The claim disseminated by the Russian media that the people gathered in Riga to celebrate May 9th were dispersed for delivering flowers to the monument is manipulative. In fact, along with flowers, the protesters carried Soviet symbols and ribbons of St. George. The use of Soviet symbols is prohibited by Latvian law from November 2021. In Latvia, May 9th is declared the official day of remembrance of the dead and wounded in Ukraine, and celebrations in connection with the victory of the USSR in the war are not allowed. In addition, Latvia prohibits the use of symbols of the USSR and modern Russia, as well as symbols of Russian aggression in Ukraine.

To celebrate Victory Day over fascism on May 9th, representatives of the Russian diaspora living in Riga gathered at the monument to the liberators of Soviet Latvia and Riga from the fascist invaders. Protesters laid flowers at the memorial and sang Soviet songs. In addition, some participants in the event held Russian flags and presented a forbidden symbol – the Ribbon of St. George, which led to their arrest.

On May 10th, Latvian police launched three criminal and twenty administrative offences for re-assembling at the memorial and using prohibited symbols.

In Latvia, May 9th is declared the official day of remembrance of the dead and wounded in Ukraine, and celebrations in connection with the USSR victory in WW2 are banned. In addition, Latvia prohibits the use of symbols of the USSR and modern Russia, as well as symbols of Russian aggression in Ukraine. Notably, Latvia, like Lithuania, Estonia, France, the United Kingdom and the United States, celebrates victory over fascism on May 8th instead of May 9th.

The parliament of Latvia passed a bill in November 2021 banning the use of the Ribbon of St. George for entertainment purposes, marches and meetings. According to the chairman of the Commission on Human Rights and Society, Artus Cimmins, given Russia’s invasion of Ukraine and its totalitarian ideology in relation to the former Soviet republics, Latvia has reason to see a sufficient threat to its democratic order and security. “In Latvia, the use of flags, coats of arms and anthems of the former Soviet Union, its republics and Nazi Germany, Nazi swastikas, and Soviet symbols – hammer and sickle with a five-pointed star is prohibited unless their purpose is not to glorify totalitarian regimes.”

On March 31st, the Latvian parliament banned the display of Z and V symbols at public events, as well as at events within 200 meters of Soviet soldiers’ monuments. The law also prohibits the promotion and glorification of events containing the ideology of the Nazi and Communist regimes in public events, including birthdays of the representatives of those regimes, days dedicated to the memory of battles and victories, as well as the occupation of liberated and independent territories or parts thereof. According to the amendment to the law, the event’s organiser will not be allowed to hold it if the planned event is held close to 200 meters from the memorials.

Notably, on May 12th, 2022,  the Latvian Parliament passed a bill to suspend the agreement between Russia and Latvia on the preservation of memorial buildings and monuments. This bill makes it possible to remove Soviet monuments.

“Today, the image and symbolism of the Soviet Army are directly and unequivocally linked to the Russian aggression and the crimes committed by its armed forces in Ukraine. Changes in geopolitical conditions and international practice mean that Latvia can not and is not obliged to maintain statues such as monuments of the Soviet occupation,” said Richard Kols, chairman of the Seimas Foreign Affairs Committee.