What response followed Turkey’s entry into Northern Syria and what does the “Alt-info” claim? 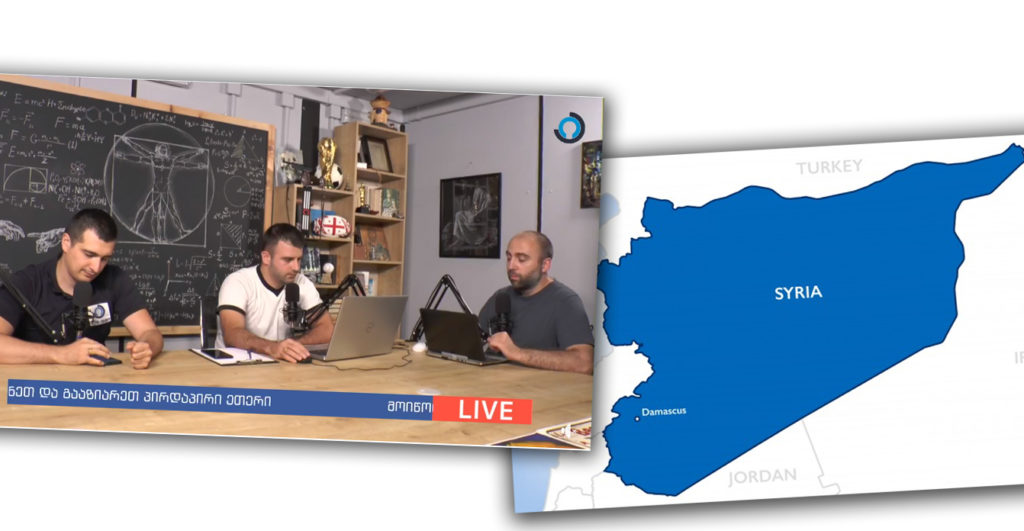 On the 4th of September, 2020, in the Program “Analytics” of “Alt-info”, hosts Giorgi Kardava and Zura Makharadze discussed Turkey’s invasion in Northern Syria. According to Zura Makharadze, Turkey’s invasion in Northern Syria and violation of international law wasn’t followed by sanctions, whereas, U.N Humanitarian Aid can no longer be delivered in Syria.

Alt-info, 5th of September, Giorgi Kardava: Northern Syria was simply occupied by Turkish armed forces in violation of all international sanctions. Just like Russia is currently occupying Abkhazia.  [Zura Makharadze: Nor is there any U.N sanctions for entering with a humanitarian mission]”

The statement made by Alt-info hosts is a half-truth. Turkey’s military operations in Northern Syria were met with varied responses from the international community, albeit it didn’t cause the termination of the humanitarian mission.

Turkish military forces alongside the Syrian opposition have controlled North territory of Syria that borders Turkey since 2016. In 2016, when the crisis in Syria escalated significantly, millions of Syrians fled to Europe through Turkish-Greek borders. It was during this period that the leaders of European countries supported the idea of Turkey regarding the creation of a “safe zone” in the Northern part of Syria, albeit the United States didn’t support the idea due to the potential risk of further escalation.

The operation launched by Turkey in Northern Syria was soon followed by harsh responses from Western countries. Foreign affairs representatives of the European Union, Council of Europe, and U.N harshly criticized Erdogan’s actions in Syria that may lead to another humanitarian crisis in Syria.

On October 18, 2019, the United States and the European Union adopted economic sanctions targeting Turkey. Sanctions authorized by the U.S targeted members of the Turkish government and certain sectors of the Turkish economy. On October 23, the European parliament condemned Turkey’s military operation in Northern Syria and rejected the idea of “safety zone” suggested by Turkey.  EU parliament called on the European Union to adopt additional financial sanctions on the trade with Turkey and financial aid.

U.N humanitarian mission in Syria launched in the first year of the war, albeit it has become one of the largest humanitarian missions as the conflicted escalated. Turkey’s military operation launched in Northern Syria in 2019 raised significant questions regarding the delivery of humanitarian assistance to Syria. Representatives of the U.N’s Office for the Coordination of Humanitarian Affairs (OCHA) in Northern Syria expressed their concern because of the conflict escalation that would cause the delay of humanitarian mission for millions of Syrian beneficiaries. In October, numerous international humanitarian workers even left the territory controlled by Turkey, albeit some of them returned and relaunched their work in November. Per U.N’s data, in November 2019, 2,7 million Syrian utilized U.N humanitarian program despite the escalated condition.

U.N humanitarian mission in Syria continues in 2020, even in times of pandemic. In January 2020,  U.N and humanitarian partners accomplished the following on cross-borders of Syria:

On June 30, 2020, during the conference in Brussels, U.N pledged $5,5 billion for the humanitarian mission of the present year, whereas an additional $2,2 billion was mobilized for 2021.

On July 11, 2020, U.N Security Council reauthorized the humanitarian mission created in 2014 to deliver humanitarian aid from Turkey into Northern Syria. The mission should provide various types of assistance to 2,8 million people in Syria until July of the upcoming year.

Who tries to terminate the U.N humanitarian mission in Syria?

Turkey’s intervention in Northern Syria significantly delayed the U.N humanitarian mission, albeit Russia vetoing the extension of the mission mandate several times has hampered the process as well. Russia, as one of the five permanent members of the UN Security Council, has the right to veto resolutions in the Security Council.

Russia (commonly, with China) has used veto power over the Syrian conflict in the UN Security Council 16 timessince 2011. Including when Russia vetoed a UN resolution imposing sanctions on the representatives of the Assad regime in 2012, the establishment of an investigative committee on war crimes committed in Syria in 2016, and an investigation of the use of chemical weapons by the Assad regime in 2018.