What Recommendations Does CDC Issue with Regards to the Masks? 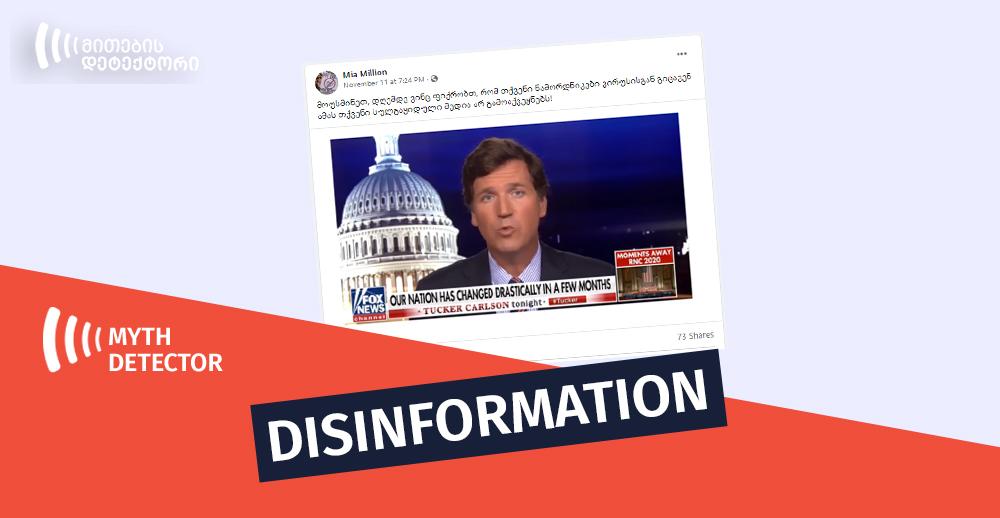 On November 11, a Facebook user Mia Million published a video of the show Tucker Carlson Tonight from August 25, 2020, dubbed in Georgian. Tucker Carlson, a journalist, criticizes restrictions adopted due to the pandemic and suspects that the security standards actually aim to fearmonger and control people. The video especially emphasizes the mandatory mask rule.

Tucker Carlson: “Here’s another data point that you won’t see on television. Less than a month ago, on July 31, the CDC, Centers for Disease Control in Atlanta, our primary public health organization, funded by the federal government, released guidelines to state health departments about patients infected with the coronavirus… The CDC suggest [the doctors] to ignore, whether the patients wear masks, as wearing a mask is completely irrelevant for the spread of the virus… What is going on? Fear works. The more afraid you are, the more you will accept [the restrictions] … the more power they have to control you.” 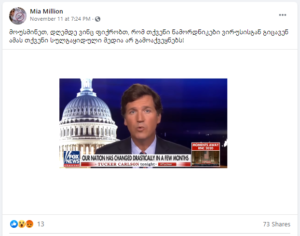 The claim by Tucker about the CDC allegedly stating that masks are inefficient is based on a manipulative interpretation of a statement by the CDC from July 31 in a protocol on tracing and testing contacts of patients infected with COVID-19. According to the protocol, only those people who have had a contact for longer than 15 minutes and without the two-meter social distancing with the infected person is considered a “close contact”. Testing is recommended for all close contacts. The protocol says nothing about the close contacts that wore masks, as the latter do not exclude the possibility of getting infected, however, recent studies show that they significantly decrease risks. For example, according to a study available on the CDC page, in Thailand, while tracing contacts of an infected person, more than 1,000 people have been examined and it turned out that those who always wore a mask were 70% more protected in situations with a high risk of infection as compared to those who did not.

Read more on the efficiency of masks in an article by Myth Detector:

Tucker’s claim that CDC stated about the inefficiency of masks on July 31 is not true. The Centers for Disease Control supported wearing masks in public places in July 2020 as well. “CDC has been recommending that people wear cloth face coverings in public settings around others outside of their households; there is increasing evidence that these masks help prevent people who have COVID-19 from spreading the virus to others” – says the statement published on the official page of CDC on July 31.

On an initial stage of the coronavirus pandemic, there indeed was a diverging opinion on the efficiency of masks among doctors and health specialists. Up to April 3, 2020, CDC did not recommend wearing masks for healthy and asymptomatic individuals and was only issuing such recommendations to those infected with COVID-19. In parallel with the rapid spread of the virus, CDC adjusted its position and has recommended wearing masks in public spaces since the beginning of April – especially in the places where following social distancing norms is difficult.

The opinion that, through the contact restriction measures, powerful elites aim to subjugate masses is widespread among the people who are skeptical towards masks and security measures aimed at preventing the spread of the coronavirus. Tucker Carlson repeats exactly this conspiracy at the end of the video. Such claims have been disseminated on Georgia Facebook pages as well. In fact, covering face and, especially, respiratory tract during a wide spread of infectious diseases goes way back. This method was also used in the 17th century during the plague pandemic.

Read more about the dissemination of the given conspiracy in an article by Myth Detector:

Tucker Carlson is an American political journalist and TV host of Tucker Carlson Tonight on Fox News. The video disseminated by the Georgian social media user is from the August 25 episode of the program. In the program, he criticized both the restrictions imposed for preventing the spread of the coronavirus and the statement made by the presidential candidate from the Democratic Party, Joe Biden, about making wearing masks mandatory. Tucker Carlson is a conservative and one of the most active supporters of Donald Trump, who, just like Carlson, often questioned the recommendations by the CDC about wearing masks and other security measures.