What is Written in Jacques Attali’s Book “Verbatim” and Who Fabricated French Politician’s Quote? 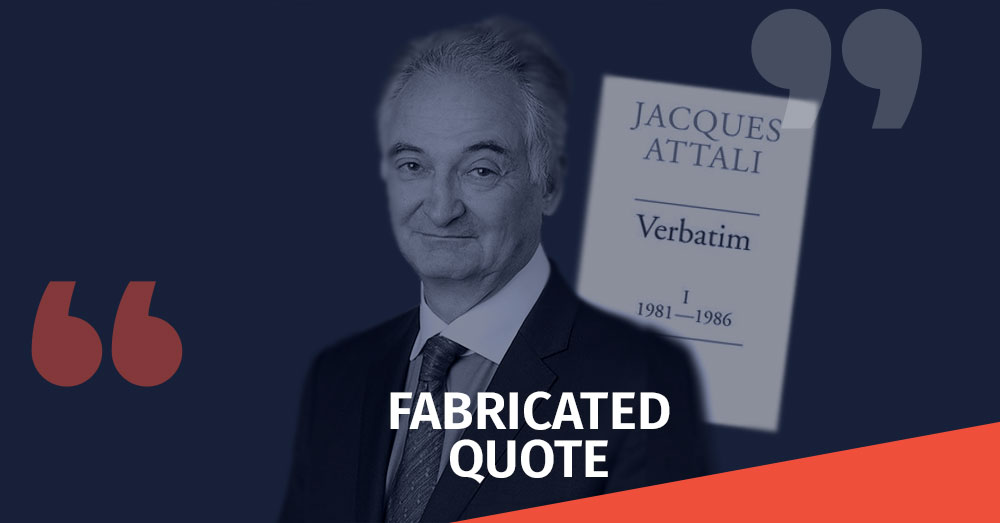 On May 11, 2021, Facebook user Ninu Nemsveridze Art uploaded a Russian-language video, which claims that global pandemic was planned back in the 20th century and its goal was to reduce the population. To prove its claims, the video provides the quote allegedly taken from the book “Verbatim” by Jacques Attali, who, according to the video, is a member of the Masonic Bilderberg Club:

“The future will be about finding a way to reduce the population… Of course, we will not be able to execute people or build camps. We get rid of them by making them believe it is for their own good… We will find or cause something, a pandemic targeting certain people, a real economic crisis or not, a virus affecting the old or the elderly, it doesn’t matter, the weak and the fearful will succumb to it. The stupid will believe in it and ask to be treated. We will have taken care of having panned the treatment, a treatment that will be the solution. The selection of idiots will therefore be done by itself: they will go to the slaughterhouse alone.”

Earlier on May 1, 2021, Facebook user Nino Chkheidze also posted a short Russian-language video about Jacques Attali, claiming that the latter is a highly ranking Mason, the face of the Rothschilds and a Zionist. According to the video, Jacques Attali wrote in 2010: “In order to establish New World Order, we need an important pandemic.” 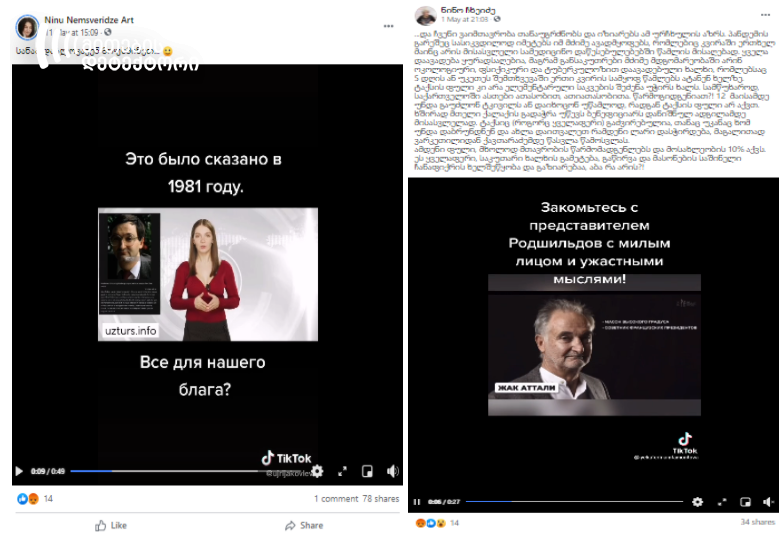 The quotes spread by Facebook users are fabricated and none of them belong to French politician Jacques Attali. The claim as if elite groups have artificially created the coronavirus pandemic to reduce the population and establish New World Order is a conspiracy theory and it lacks any evidence.

During last year, French and English-language social media users were spreading more extensive version of the fabricated quote published by Ninu Nemsveridze Art. The same quote was spread on Russian social media networks, websites and forums multiple times in 2020. According to the fabricated quote, the issue of depopulation will be raised in the future and old people who do not create anything that is economically valuable will be destructed via a pandemic. The same sources claimed that the quote had been taken from the 1981 book “Verbatim” by Jacques Attali. 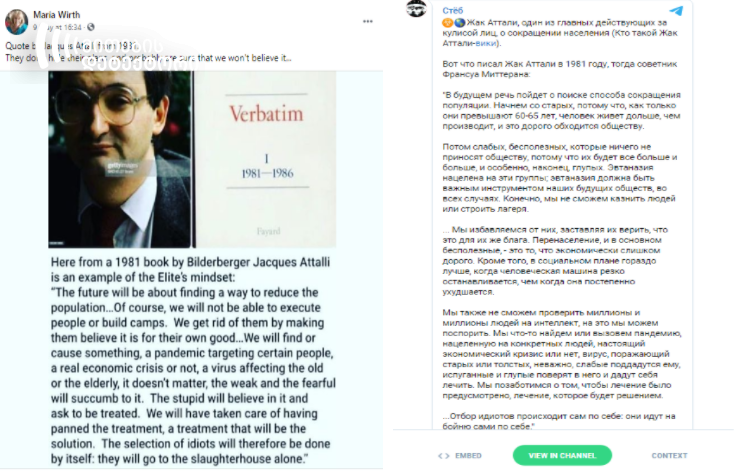 “Verbatim” is a memoir book by Jacques Attali, a French politician and counselor to President François Mitterrand from 1981 to 1991. The book reproduces Attali’s memories, dialogues and routine activities. According to the French fact-checking organization AFP Factual, its verification team failed to find the quote in the book from the 1980s. The publisher of the work in France sent a copy of the interview with Jacques Attali in the book, where the viral text does not appear. Moreover, it found no mention of a pandemic in the book.

Besides the book by Jacques Attali, French fact-checkers also analyzed another book “The Future of Life” about Jacques Attali. The book was released in 1981 and it represents a collection of interviews conducted by Michel Salomon with Attali. The book contains several fragments, where Attali talks about people aged 60-65, noting that in the very logic of industrial society, the objective will no longer be to extend life expectancy, but to ensure that within a specific lifespan, people live as well as possible but in such a way that health expenses will be as low as possible in terms of costs for the community. Attali also noted in the interview that “euthanasia will be one of the essential instruments of our future societies in all cases”. He, however, clarifies that he is not a supporter of euthanasia. Probably, the quote according to which Attali allegedly spoke about reduction and artificial destruction of population at the expense of old people emerged just after manipulative interpretation of this interview.

The conspiracy theory claiming that the COVID-19 pandemic was created artificially and vaccination aims at depopulation was spread earlier too. See detailed information in Myth Detector’s articles:

At the same time, the video spread by Ninu Nemsveridze Art notes that Jacques Attali is a member of the Masonic Bilderberg Club. In fact, since its inaugural Meeting in 1954, the annual Bilderberg Meeting had initially been a forum for informal discussions to foster dialogue between Europe and North America. Presently, the Meeting discusses a broad range of issues, including trade, modern technology, monetary policy, investments, international security challenges and ecological problems. Jacques Attali attended the Bilderberg Meeting in 1975. See detailed information about conspiracy theories related to the Bilderberg Meeting in Myth Detector’s article:

The video uploaded by Ninu Nemsveridze Art was first spread by TikTok user @ujrijakovlev. It is noteworthy that a woman reading Attali’s fabricated quote in the video actually is an artificial intelligence anchor created within the framework of mail.ru’s innovative project. A website dictor.mail enables netizens to create any content with AI anchor’s participation. 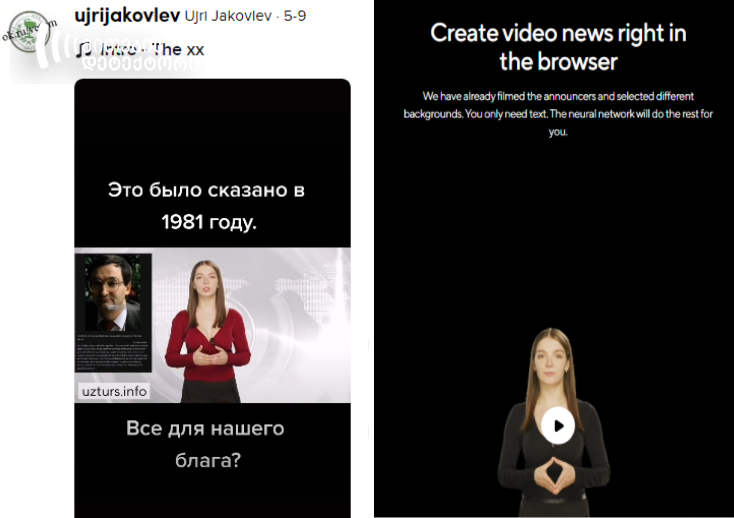 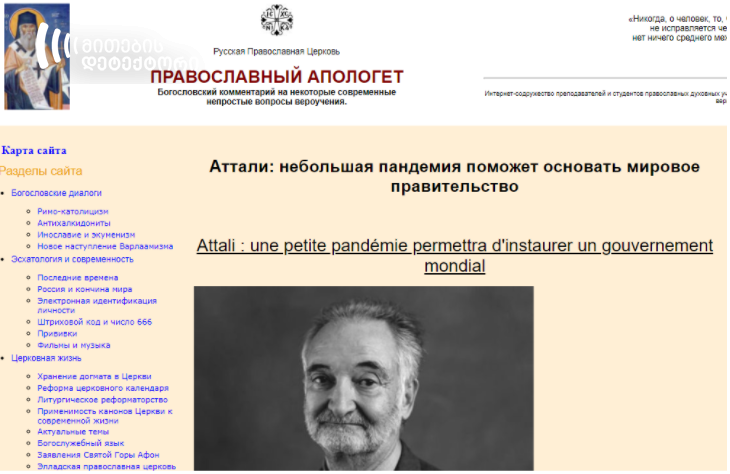 The Russian website, in turn, manipulatively spreads the French website’s 2009 article. The article provides a summary of Attali’s brief blog published on l’Expres on May 3, 2009.

In fact, Attali speaks in the blog about the means of avoiding future hypothetical pandemic citing the example of SARS epidemic in East Asia. He notes that it is necessary to establish international mechanisms for the prevention and control of pandemic that will help avoid global crisis. At one point, Attali really mentions “World Government” as a mechanism of management of future global crises; the text, however, says nothing about New World Order.

The video uploaded by Nino Chkheidze involving the above quote was first spread by TikTok user @yekaterinamtamontova. The account has been removed from the platform, but Google search results show the links to the videos uploaded by the user that were apparently related to World Government. 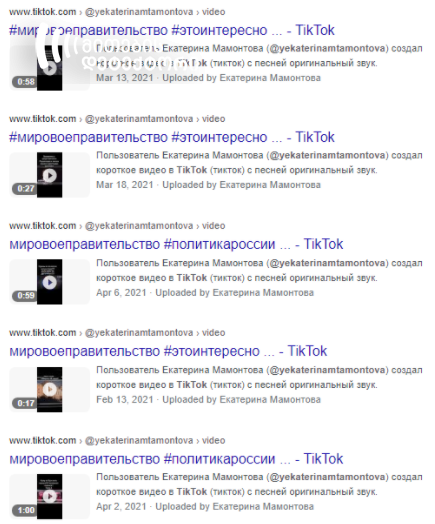 Jacques Attali is a French leftist politician, economic and social theorist, writer. At different times, he served as a counselor to President François Mitterrand and the head of the European Bank for Reconstruction and Development. He proposed a reform of the higher education degrees system. Later, he led the government committee on how to ignite the growth of the French economy. Attali is the author of more than 50 books. He co-founded the European program EUREKA, dedicated to the development of new technologies. In 2009, Foreign Policy recognized him as one of the top 100 “global thinkers” in the world.