What is the connection between Pfizer’s former vice-president and a conspiracy organization? 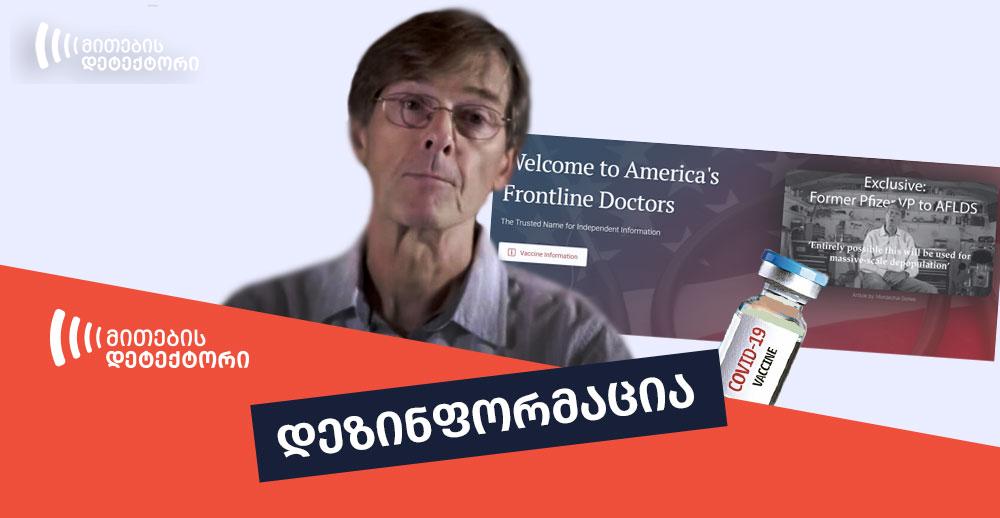 On March 30, Facebook user Beka Vardosanidze shared a post, where a quote by Pfizer’s former vice-president is stated: “This may be used to massively reduce the population”. At the end of the quote, Beka Vardosanidze emphasizes, that he will share the full version of the text on the social network Telegram, since otherwise, “Facebook’s algorithm will go crazy”. 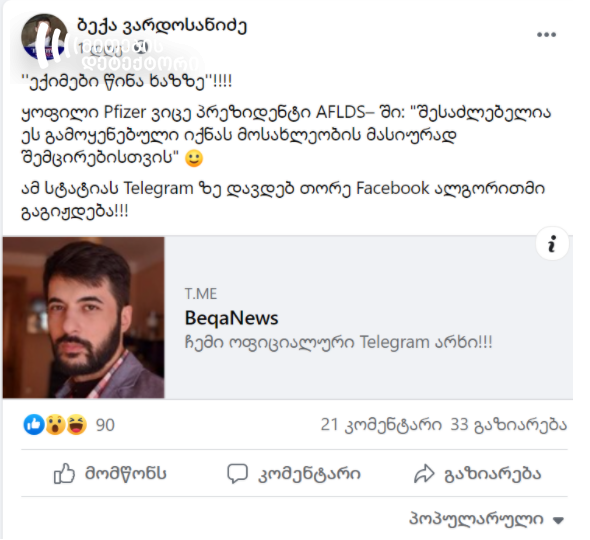 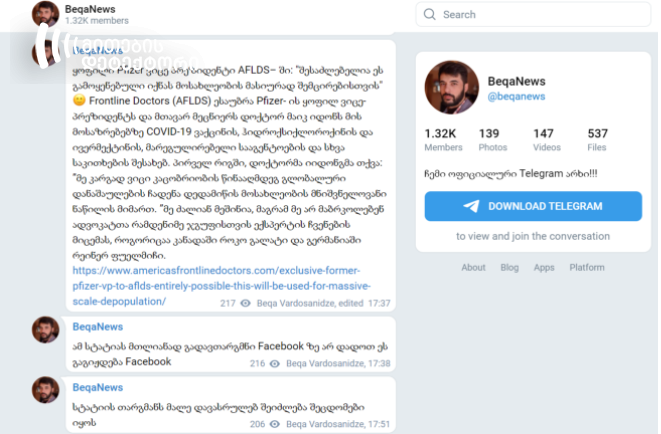 The respondent of the interview shared by Beka Vardosanidze, Pfizer’s former vice-president Michael Yeadon often shares false allegations about the coronavirus, whereas the organization, which interviewed him, consists of conspiracy theorist medics and gives out recommendations about fake treatments of the coronavirus.

Pfizer’s former vice-president Michael Yeadon actually spoke about different topics surrounding the spread of the coronavirus in an interview with America’s Frontline Doctors. He mentioned the topic of Covid-19 vaccination and noted, that there is no need for vaccines, therefore, according to him, their large-scale use, supposedly, serves “evil objectives”. In his opinion, the evil objective is to cause harm to a large number of people in the future and to prepare a system in advance for this goal, in this part of the interview Yeadon assessed, that the vaccination may be used for large-scale depopulation.

In the interview, Yeadon also mentioned, that there are various methods to treat the coronavirus, including hydroxychloroquine and ivermectin, which are used against malaria. In reality, numerous researches have proved, that hydroxychloroquine or ivermectin are not effective treatments against Covid-19 and cannot cure this virus.

Michael Yeadon is a British biochemist and pharmacologist. He started working in the pharmacological company Pfizer in 1996 and did actually hold the position of vice-president from 2005 until 2011. After leaving Pfizer, he founded and led his own biotechnological company Ziarco from 2011 until 2017.

Anti-vaxxer allegations based on Yeadon often appear on social networks. For example, in October Yeadon stated, that the pandemic was over and there was no more need for vaccines, in December a statement was spread, co-authored by him without any scientific proof, that Covid-19 vaccines cause infertility in women.

Reuters got interested in how Pfizer’s former vice-president turned into anti-vaxxers’ favorite hero. Reuters studied Yeadon’s activity throughout the years on the social network Twitter. According to Reuters, when the first wave of the pandemic also engulfed Great Britain in March 2020, Yeadon shared the following comment on his Twitter account: “Covid 19 is not going away. Until we have a vaccine or herd immunity, “all that can be done is to slow its spread.” A week later, he tweeted: “A vaccine might be along towards the end of 2021 if we’re really lucky.” Yeadon opposed an opinion of one of his followers, according to which, the vaccines “harm many, many people”.

Yeadon’s pathos changed since April of 2020. From then on Yeadon, who previously thought, that the only cure from the virus would be vaccines or herd immunity, wrote, that the world was overreacting, nothing special was happening and the coronavirus, like other common viruses, would fade away.

During the research, Reuters reached out, yet unsuccessfully, for an interview with Michael Yeadon, but spoke to a few of his former colleagues. Mark Treherne, a former employee of Pfizer and the current chairman of the research company Talisman Therapeutics, told Reuters, that he absolutely disagreed with Yeadon’s recent statements and he did not sound like the knowledgeable, intelligible scientist, that he knew 20 years ago.

It should be noted, that on February 3, 2021, Yeadon tweeted, that the last post published under his name was horribly offensive, he did not write it and has already deleted it. It is unclear which post was Yeadon referring to. On February 4 he tweeted: “I’ll soon be gone” and in 2 days, his Twitter account was fully deactivated. As for his LinkedIn profile, Yeadon’s status was changed, and currently, it looks like this: “fully retired”. 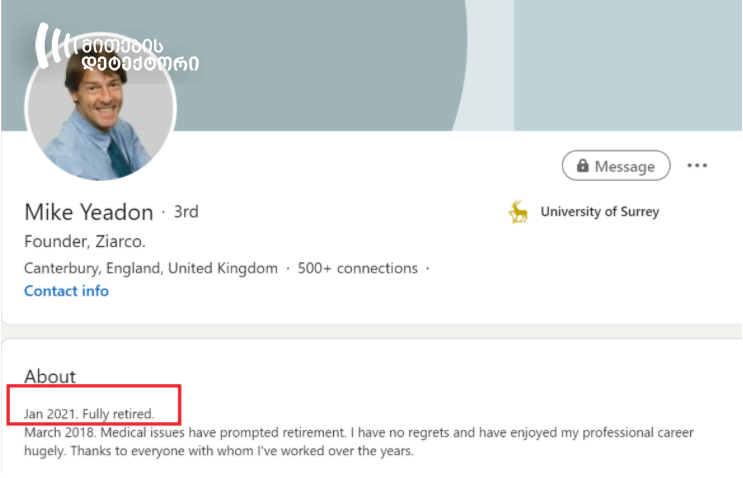 The organization America’s Frontline Doctors (AFLDS), which interviewed Michael Yeadon, was founded by Dr. Simone Gold in 2019. The organization’s popularity grew especially during the coronavirus pandemic. The founder of the organization has publicly stated several times, that there’s an easy way to treat the coronavirus and that is Hydroxychloroquine used against Malaria. Advice on using this substance against the virus is published on the organization’s website as well. Simone Gold shares the view of a conspiracy theory about big pharmacological companies (Big Pharma). According to this conspiracy theory, big medical, especially pharmacological companies purposefully conceal treatment methods, contribute to the spread of diseases and cause them artificially.

It should be noted, that Dr. Simone Gold was arrested for taking part in the invasion and disarray of the Capitol in the U.S capital on January 6, 2021.

Another member of the organization, Dr. Stella Immanuel, who agrees with the hydroxychloroquine treatment method, thinks, that wearing masks is not effective in protecting against the coronavirus. USA’s former president Trump has also shared a video made by her about this topic, but Twitter blocked the video due to false accusations. In 2015, Stella Immanuel also stated, that doctors use alien DNA to treat patients, whereas vaccines are created to prevent people from being religious.