What is the Bilderberg Meeting and who fabricated Rockefeller’s quote? 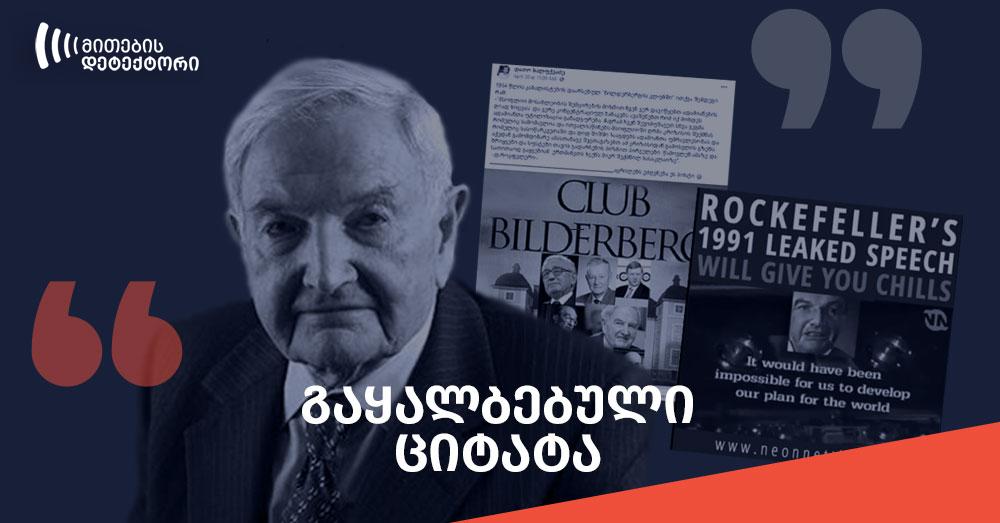 On April 30, 2021, Facebook user Dato Salukvadze published a post containing David Rockefeller’s quote about the reduction of world population, which, as Salukvadze claims, he uttered in the Bilderberg Meeting in 1954. According to the quote, per the long-term plan for the reduction of world population, people have to be thrown into crisis and then offer a solution themselves that will actually be a slaughterhouse.

The post author says to be dedicated to vaccinated people has the photo of”Club Bilderberg” attached. As of May 9, the post has 411 shares. 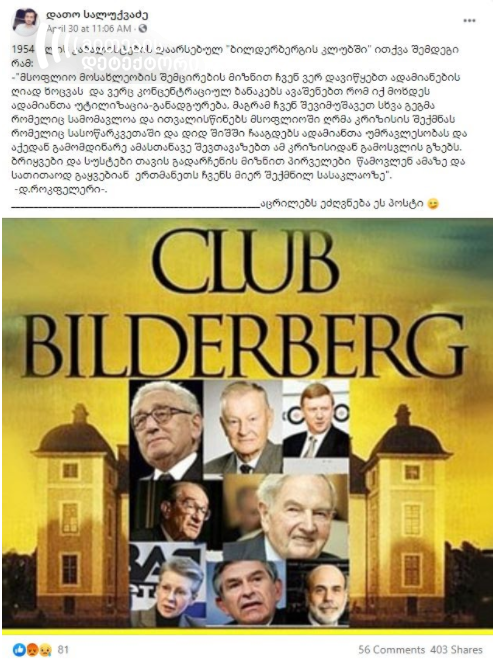 The quote given in the post is fake. No such words with similar content from David Rockefeller can be found in open sources, including in his speeches at the Bilderberg Meetings. In the past, the meeting itself had become a source for conspiracies numerous times, however, its connection to coronavirus pandemic or vaccines hasn’t been confirmed

Dato Salukvadze’s post doesn’t indicate the source confirming the authenticity of the information. No such quote can be found in open sources.

Quote from Rockefeller’s speech at the Bilderberg Meetings has been disseminated online in the past despite the fact that the authenticity hasn’t been confirmed. Rockefeller’s alleged quote, where he expressed his gratitude towards the heads of Washington Post, New York Times, Time Magazine, and other publications who have attended meetings and respected their promises of discretion, without which it’d be impossible fulfill their plans, have disseminated as a video in foreign, as well as Georgian webpages. However, the authenticity hasn’t been confirmed. The video has an audio recording of the quote and indicates that it’s an audio simulation.

Publications such as “Politicano”, “Sakinform”, “Georgia and the World”, “Intermedia” and so on are the ones writing about “Bilderberg Meetings” online in the Georgian language.

According to the information disseminated by the page “Politicano” linked to Yevgeny Primakov Russian-Georgian Civic Center, American billionaires Rockefeller, Carnegie, and Ford’s foundations founded a secret conference “Bilderberg Meetings” that enables elites to spread soft power and aims to develop a world financial government. The article provides another fake quote from Davit Rockefeller that “Myth Detector” has previously written about:
New world order or peaceful and interdependent world – What did Rockefeller say

The article provides a link to the article by the publication The Guardian, however, the latter does not contain David Rockefeller’s aforesaid quote nor the comment from Rockefeller’s spokesperson that “Politicano” published. In reality, The Guardian article is about conflict of interests that might develop in the closed meeting where politicians, businessmen, and financial specialists are gathered.

The Facebook page “National Front for Salvation of Georgia” reads that Bilderberg is one of the Masonic groups, whose “black” American wing, governed by Rockefellers, and “red” Russian wing, governed by Rothschild, are in a race for the 1st place in the world. According to their claim, both wings aim to “bring down world population to 0,5-1 billion, abolish nations and religions, reduce people to one mass, crowd with one religion worshipping Lucifer i.e, Satan…”. As the author claims, the meeting uses wars, food, drugs, viruses, and so on to reach this goal and associates the meeting’s influence to the power of capitalism and the banking system. 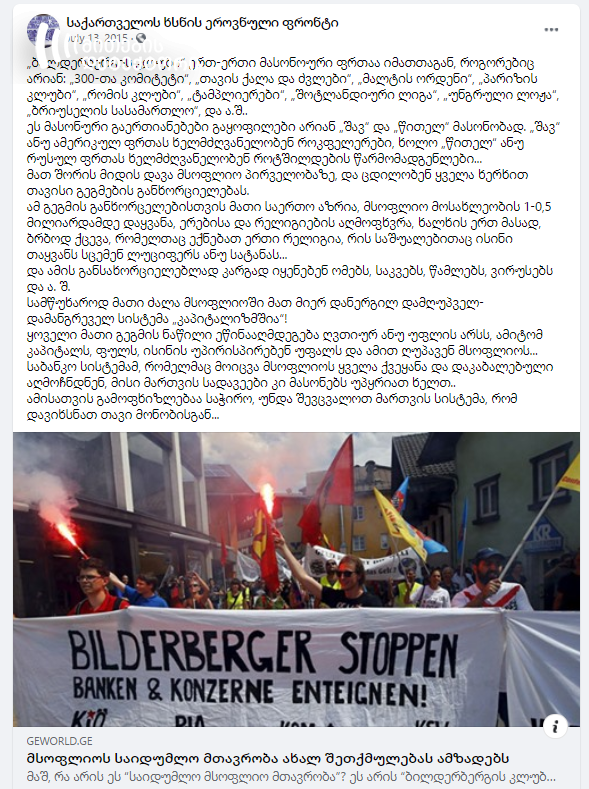 The same train of thought is given in Sakinform’s article, which is a translation of the article published on the Russian publication politikus.ru. The author writes that besides staging wards, “Bilderberg Meetings” selects and resigns political leaders Author of article claims that the meeting agenda comprised topics such as Ukraine, the Russia-China agreement, Putin’s plan for alternative World Order, as well as a strategy for working with anti-EU parties in the European Parliament.

“Who Governs the World – Appointment And Resignation of a President is Not Up to People But the Members of the Club” – Article with the aforesaid headline was published on the “Georgia and the World” webpage in 2014.

Theories about the “Bilderberg Meetings” are compiled in the much bigger conspiracy about the meeting’s tight connections to other similar organizations and it being headed by a governing body known as “Illuminati”. All organizations primarily aim to create a “New World Order”, reduce the world population to 0.5 billion and have influence over the whole planet. “Illuminati” uses all means to reach this goal: they stage terroristic acts, wars, spread viruses, diseases, and famine, undermine governments, create unstable conditions, engage in human and drug trafficking. The followers of the theory claim that Israeli and the U.S Intelligence Agencies (Mossad and CIA), as well as terrorist organizations including Al-Qaeda are special force units of “Illuminate”. Per conspiracy theorists, Illuminati manages the whole system from three cities: London is a monetary control center, Washington is military, whereas the Vatican is a spiritual control center.

The aforesaid information is not based on any reliable source nor is it backed up by any evidence.

“Bilderberg Meetings” is an annual conference founded in 1954 initially to foster dialogue between Europe and North America and avoid World War III. Nowadays, the main topics on the agenda are trade, modern technologies, monetary policy, investment, international security challenges, and ecological problems since it’d be impossible to tackle problems unilaterally in a globalized world. The conference annually hosts 120-150 participants – political leaders, industrialist, financial specialists, bankers, businessmen, and representatives from academia and media. Participants are free to use the information received without disclosing the identity of the author. Such confidentiality principle, which became the source of conspiracy about the secrecy of the meetings, provides free and genuine debates.

The meeting agenda and the list of participants are available on the official webpage of the Bilderberg. Bilderberg Meeting rules are based on Chatham House Rules, which states that participants are free to use the information received during the discussion, but cannot disclose who made any comment. The rule originated in the U.K Royal Institute of International Affairs in 1927 to encourage open discussion.

The name is associated with Dutch Hotel “Bilderberg”, where the first meeting was held. It had several initiators including Polish politician-in-exile Józef Retinger, who was concerned about growing anti-American sentiments in Western Europe. Retinger believed that European and American leaders should support the idea of ​​Atlanticism and strengthen cooperation on political, economic, and defense issues at an international conference. Retinger addressed Dutch prince Bernhard who shared the idea with the Belgian prime minister and CIA director, who received the meeting acceptance from President Eisenhower’s advisor.

Even now, Bilderberg Meetings are the source of numerous conspiracies because of the above-mentioned confidentiality rules. In the U.S, conspiracy theories have quite a few well-known supporters including, The John Birch Society, political activists Lyndon LaRouche and Phyllis Schlafly, writer Jim Tucker, conspiracy theorist Alex Jones, politician Jesse Ventura, as well as Lithuanian writer Daniel Estulin, and British politician Nigel Parage. The meeting members/heads say about those theories that such interpretations are unavoidable, there will always be people who believe in conspiracies, however its not much of an importance.

As for Rockefeller’s link to the “Bilderberg Meeting”, David Rockefeller was a member of the Bilderberg Steering Committee and contributed financially to the organization of annual meetings. According to the rules, committee members are obliged to provide a financial contribution for the meeting.

Conspiracy theories about Rockefeller’s attempts to divide the world and create a new order have circulated on social networks even in the past. Read more on this topic in the articles prepared by “Myth Detector”: