What information is spread about vaccine side effects? 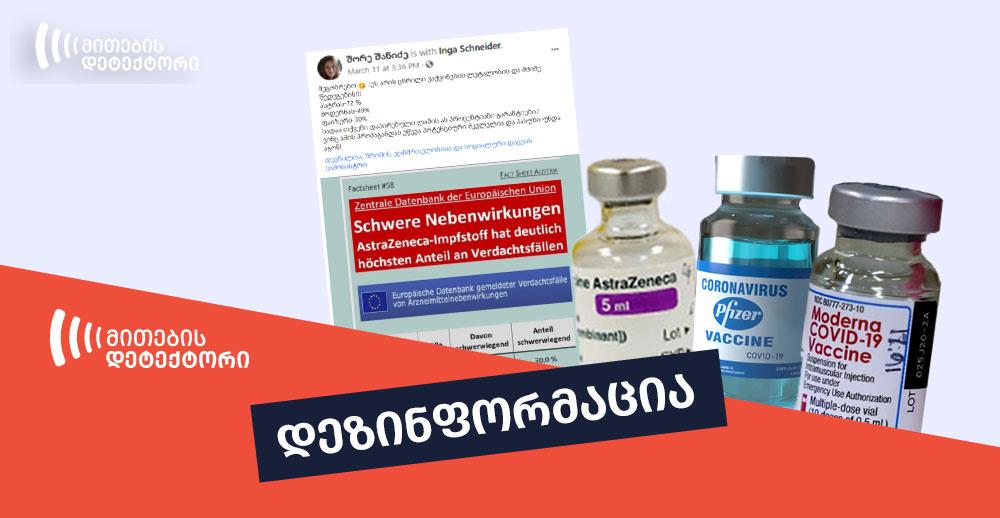 On March 11, 2021, Facebook user Shore Shanidze published a post on her personal page regarding Covid-19 vaccines, accompanied by the table. The author of the post notes that it reflects the lethality and severe effects from vaccination. According to Shanidze, severe effects caused by vaccination are 72,8% in case of AstraZeneca, 49% in Moderna’s case, while 30% in case of Pfizer. The accompanying table, which is in German, cites the EudraVigilance – European database of suspected adverse drug reaction reports as a source of the information. In addition, on March 18, Shore Shanidze published another post on vaccine side effects, noting that the number of deaths from Pfizer and Moderna vaccines during 4 months is equal to the number of deaths resulted from other vaccines during past ten years. The table, accompanying the post cites the Vaccine Adverse Event Reporting System of the U.S. Centers for Disease Control and Prevention as a source of the information. 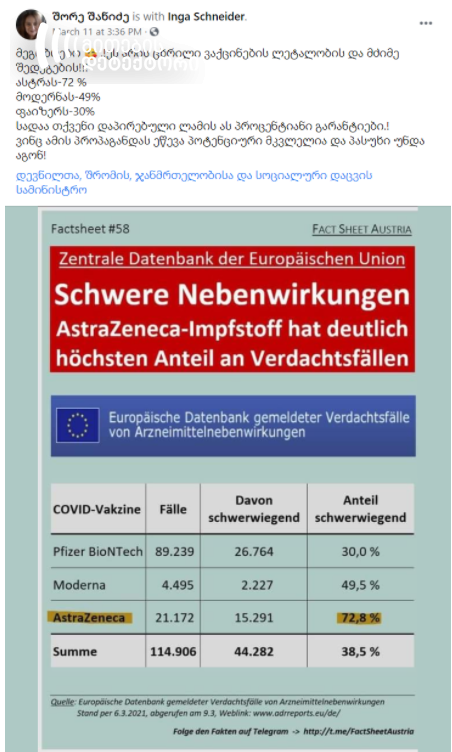 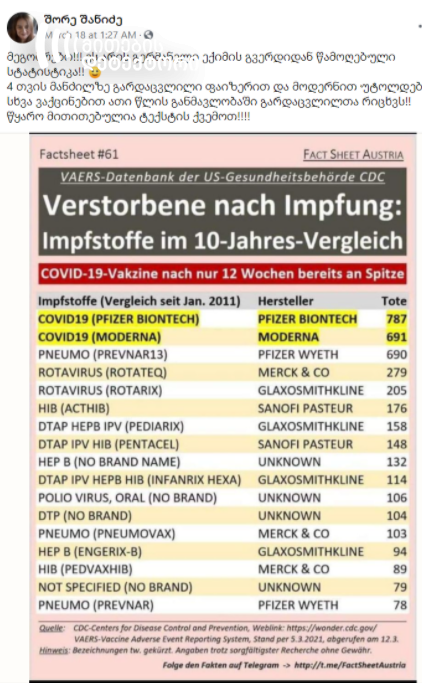 The arguments given in Shore Shanidze’s post are not correct due to the following circumstances:

Disinformation N1: 72%, 49% and 30% of severe effects were recorded following vaccinations with AstraZeneca, Moderna and Pfizer respectively.

Fact 1. In fact, these numbers reflect the total number of reports on side effects rather than total vaccination statistics, and the EudraVigilance system is cited as a source of information, where the side effects are reported by users, which requires further research and approval.

According to the table, as of March 6, 2021, 15 291 out of 21 172 reported cases related to serious adverse events, representing 72.8%. This percentage does not reflect the side effects of the total number of vaccinations. In addition, such table cannot be found on the website of the EudraVigilance database, cited as a source. The table also does not specify which geographical area the information refers to.

The screenshots, accompanying the Facebook posts, can be found on the Telegram channel “Fact Sheet Austria”. The channel was created on January 3 and has more than 3 thousand members. 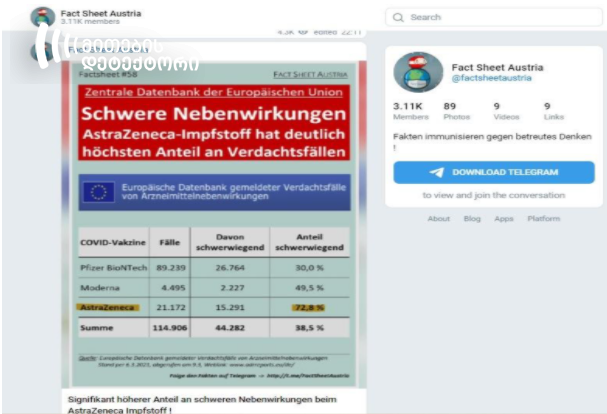 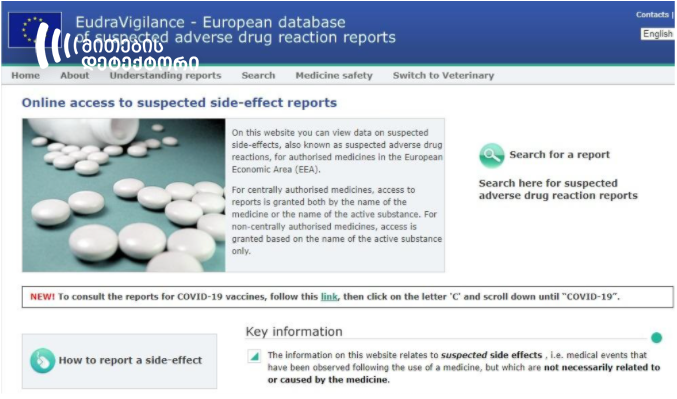 The website of the European database of suspected adverse drug reaction reports – EudraVigilance says that the European Medicines Agency has only limited control over the completeness or accuracy of the information contained in the system. According to the EudraVigilance, the information refers to suspected side effects, which means that the patient developed these events following the administration of the medicine. Thus, a specific case is reported when there is a suspicion that an adverse event is related to the medicine. However, this does not mean that any link has been established between the medicine and the side effect. The side effect may be caused by other factors. Accordingly, the report is based on the assumption only.

The fact that the number of individual cases given in the database does not always match the number of side effects should be taken into account. In the EudraVigilance system, a single person can record more than one adverse event in their report.

Disinformation N2: The number of Pfizer and Moderna vaccine deaths during 4 months is equal to the number of deaths from other vaccines during past ten years.

Fact 2. No Pfizer and Moderna deaths have been revealed in the United States so far, the statistics specified in the second post reflect only the side effect reports from the users logged in to the VAERS system, and both tables belong to the Telegram channel Fact Sheet Austria, which cannot be used as evidence.

It is noted in the second table shared by Shore Shanidze that the statistics are based on the data from the U.S. Centers for Disease Control and Prevention (CDC) VAERS system. However, this table, just like the second table, is published on the Telegram channel and does not represent an official source.

On March 16, CDC published information regarding adverse events reported to the VAERS system as having occurred after the Covid-19 vaccination. According to CDC, more than 109 million doses of Covid-19 vaccines were administered in the USA in the period from December 14, 2020, through March 15, 2021. During this period, 1,913 (0.0018%) reports of deaths were submitted to VAERS system by the people, who received the Covid-19 vaccine. Both CDC and U.S. Food and Drug Administration’s (FDA) physicians study each report of death, and CDC requires medical documentation for further assessment of the reports. A review of clinical information, including, deaths certificates, autopsy, and medical cards have not revealed any evidence that vaccination caused patient deaths.

For more on the VAERS system, see Myth Detector’s publication:

Data on the adverse events of vaccines

According to the U.S. Centers for Disease Control and Prevention, severe allergic reactions can occur after any vaccination. For example, Anaphylaxis, which Covid-19 vaccines may cause, occurs very rarely, and a review of the events reflected in the VAERS system has shown that it occurred in approximately 2 to 5 people per million who received a Covid-19 vaccine in the United States. At the same time, if such a reaction occurs, doctors can immediately and effectively treat it.

According to Amiran Gamkrelidze, director of the Center for Disease Control in Georgia, out of 60 million people vaccinated in EU countries, 16,8% had serious side effects and none of these cases resulted in death.

In case of Canada, as of March 5, 2 255 174 doses of vaccine had been administered. A total of 1923 (Pfizer -1061, Moderna – 862) reports of adverse events following immunization have been received by a database created by the Government of Canada, which is 0.085% of all doses administered. The number of serious adverse events among them was 214 (0,009% of all doses administered). In addition, there were 15 reports on deaths occurred after the administration of vaccine. However, a review of the cases has determined that nine cases were not linked to Covid-19 vaccine, while the other 6 cases are still under investigation.