What happened in Buzmareti on Ascension Day and to whom does the church belong? 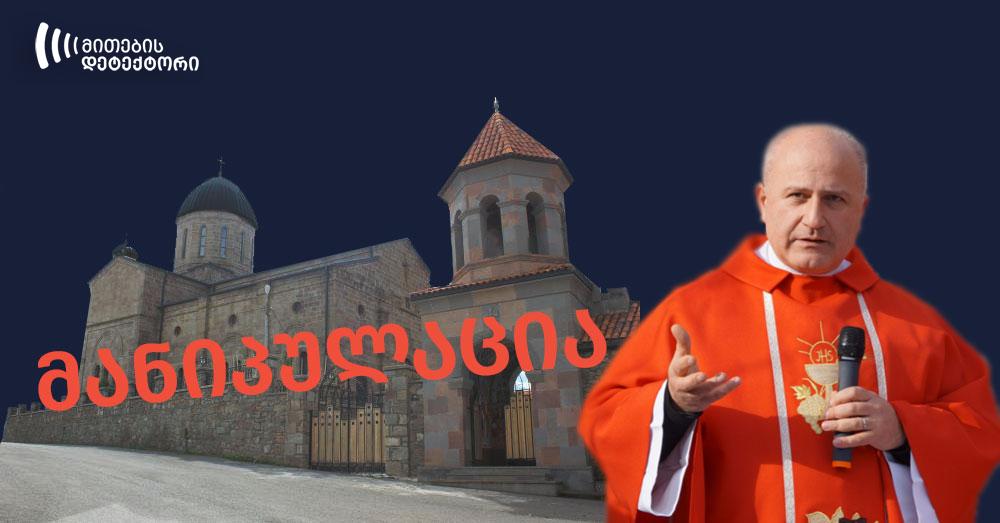 On May 14, Facebook page სოფელ უდეს მონასტრები (Monasteries of the Village Ude) shared monastrisnobati.ge article about Catholics celebrating Ascension Day on May 13 in village Buzmareti. The article titled “Annual Invasion of Parish from the Latin Church of Rome in the Orthodox Churches of Buzmareti” notes that for two years, law enforcement officers haven’t allowed Catholics in Buzmareti, inside the borders due to pandemic-related regulations and as a result, they held celebratory mass for Ascension Day on May 13 near the Virgin Mary’s Dormition Church of Lower Buzmareti. According to the title, the Buzmareti church is an orthodox church, which was invaded by Catholics. Moreover, the article also writes that Catholics claim ownership over the two ancient orthodox churches in Buzmareti and try to forcefully seize something that doesn’t belong to them.

Information published on monastrisnobati.ge alleging that catholic parish annually invades Buzmareti churches is a manipulation. Even though Catholics have celebrated Ascension Day in Buzmareti for years now, the orthodox church has forbidden them to enter the place in recent years. As for the church ownership, the dispute between the catholic and orthodox churches has been ongoing for years now, while numerous historical sources confirm that churches in village Ude and Buzmareti are catholic. Cultural Heritage Portal states about Virgin Mary’s Dormition Church that it was built in 1901-1909 as a catholic church by the efforts of Catholic parish.

Chief of the Chancery at the Catholic church responded to the monastrisnobati.ge article

Chief of the Chancery at the Catholic church administration and head of the Khizabavri and Vargavi churches Akaki Chelidze wrote a letter as a response to the article. The letter notes that similar to last year, catholic parish wasn’t allowed to enter the border-controlled zone to go to Upper Buzmareti church. Akaki Chelidze recalls that last year, despite the coronavirus-related restrictions, border gates were opened for parish on the Orthodox Ascension Day, which raises suspicions that pandemic restrictions were an excuse to oust Catholics from the Buzmareti Church, it’s an attempt to take away churches from Georgian Catholics, an obvious injustice.

“Samkhretis Karibche” writes that Catholic parish referred to border police on May 4 with a request to open the borders, their request were satisfied, however, 2 days before the Ascension Day parish were told that the request to open borders wouldn’t be granted due to coronavirus. As Bishop of Catholic Churches in Georgia, Giuseppe Pasotto stated, State Agency for Religious Issue, involved in the issue, commented to the “Samkhretis Karibche” saying there is no law banning outdoor masses during the pandemic.

Webpage of the Tolerance Center under the Auspices of the Public Defender reads that Ude Virgin Mary’s Dormition Church was built in 1904-1906 by Georgian Catholics.

Dissertation about history and architecture of Catholic churches, under the Ph.D. degree program in Cultural Studies at the Faculty of Arts and Science of Ilia State University, also speaks about Ude Virgin Mary’s Dormition Church. Virgin Mary Catholic church stood on the site of a church with a large dome built at the beginning of the XX century. According to the inscriptions on the church tiles, the new temple was built on the site of an old church at the beginning of the 20th century by local Catholics with the help of Muslims.

Inscription of South façade of the church says as follows: “The builders of this church were Ude 2120 catholic souls. 520 Muslim souls with both Georgian tribes. Mother of God, we devote our work to you”.

Moreover, the Tolerance Center webpage notes that as local Catholics say, the holy cross on a church dome has an inscription: “Holy Cross was molded with a donation from 127 Catholics”. In the 1930s catholic priest was arrested and the church was changed into storage for collective farming. In the 1990s, the state handed the church to the Georgian orthodox church and since then, prayers have been held there in an orthodox manner.

As read on the webpage of Tolerance Center under the Auspices of the Public Defender, Center representatives visited Village Ude on November 28, 2012, and inspected the ongoing construction work in the Virgin Mary’s church. Webpage notes that the church had an arched roof typical for catholic churches, however, church appearance has changed significantly following the construction work and now its dome resembles one of the orthodox churches. 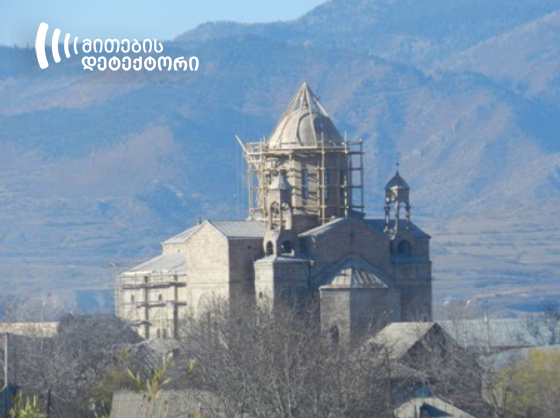 Photo: The Tolerance Center operating under the Public Defender of Georgia

This fact is mentioned in the 2020 report (“Restitution Policy of Georgia”) of Tolerance and Diversity Institute, where we read that in 2012, local Orthodox priests in the Ude village carried out the repair works of the Catholic church’s dome without any prior consent of the appropriate state agencies. In addition, according to Catholics, members of the Orthodox parish first removed the religious attributes of Latin Catholics, located in the praying corner of Ude Church, and later, barred the Catholic community from praying in the church. It’s worth mentioning that according to the information on the cultural heritage portal, Virgin Mary’s Dormition Church was recognized as a cultural heritage monument in 2007. Webpage notes that the aforesaid church was built as a catholic church in 1901-1909 by Simon Chilashvili with the help of local catholic residents. 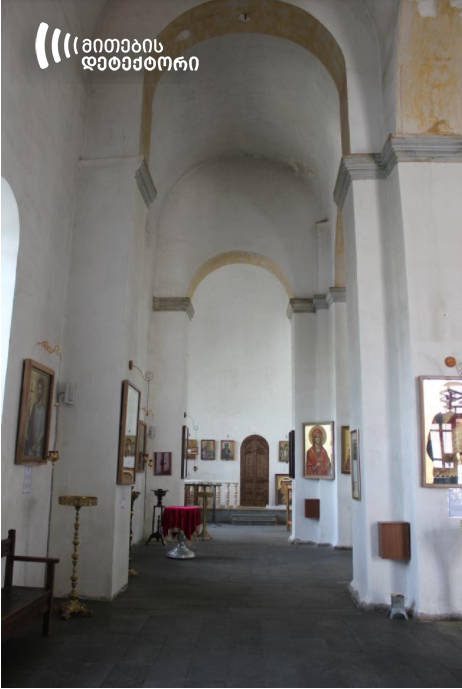 The 2016 article from “Liberali” contains the comment from theologist Beka Mindiashvili saying that the government began restitution for Patriarchate of Georgia in the ’80s and the latter promised that if temples were to return to the orthodox church, they would be much more taken care of with Catholics being able to serve there.

Head of the Arali Catholic Church Zurab Kakachishvili noted with „Samkhkretis Karibche” that mass was first held on this territory in 2005 within the church borders, while parish moved outside of churchyard in 2007 when the territory became part of the Orthodox monastery and catholic parish were no longer allowed to hold masses in the yard. 70 years old respondent of the publication recalls that there’s a long history of celebrating Ascension Day in Buzmareti and, according to him, people have been coming here and praying since his childhood.

The 2010-2019 report (“Freedom of Religion or Belief in Georgia) of Tolerance and Diversity Institute mentions as one of the recommendations that the Georgian government should examine the lawfulness of transferring seven Catholic churches (in Gori, Ivlita village of Akhaltsikhe Municipality, villages of Ude and Buzmareti of Adigeni municipality, Kutaisi, and two churches in Batumi) to the Georgian Patriarchate and ensure the restoration of the right to the Catholic Church;

One more historically catholic church is located in the village Ude.  Dissertation, under the Ph.D. degree program in Cultural Studies at the Faculty of Arts and Science of Ilia State University, discussed the history of St. Nino Church in the village Ude of Adigeni municipality. The small church was in the name of St. Sergius, however, the name changed to St. Nino after it was transferred to the Georgian Orthodox church.

The dissertation provides the 1992 book “Traveling in Samtskhe-Javakheti” by the author Giorgi Bochoridze, who mentioned the small church of Ude and noted that “communion table is held per catholic custom. it belongs to the Georgian Catholics even now.”

The dissertation notes that the Georgian Catholic community in the village of Ude has always been strong and made up the majority of the population, amounting to 897 in 1885, 1562 in the early 1990s, and 2120 in 1909.