What does the Video of ‘Dancing Ukrainians in Berlin’ Actually Depict? 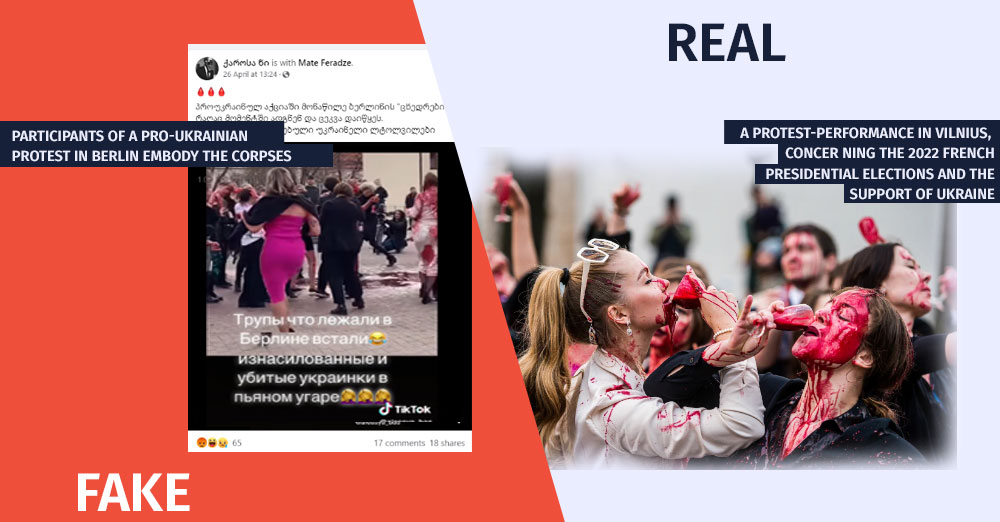 On April 26th, the Facebook user “Karosa Ni” posted a video of people dancing. The video is accompanied by a Russian-language caption: “Lying corpses were resurrected in Berlin. Raped and murdered “Ukrainian women being drunk.” The caption gives the impression that the women shown in the video are Ukrainians in Berlin. In addition, “Karosa Ni” notes that the participants in the pro-Ukrainian rally first embodied the corpses, and then started dancing. 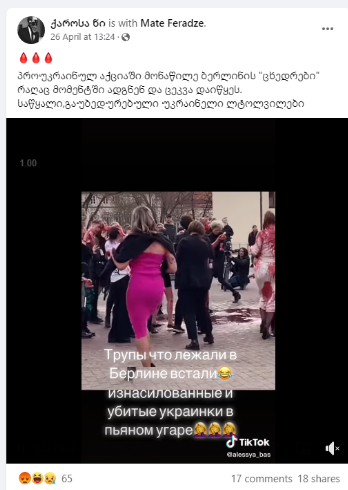 The disseminated information that the Ukrainians participating in the rally first embodied the corpses and then started dancing is false. The protest-performance was organized by Lithuanian artists in Vilnius, which concerned the 2022 French presidential elections and the support of Ukraine.

The protest-performance, which we see in the disseminated video, took place on April 22nd in Vilnius, in the so-called “French Park”.

Among the organizers and participants of the performance were Lithuanian musicians, artists, photographers and students. According to them, the rally was held in connection with April 24th, which is the date of two important events – two months after the Russian invasion of Ukraine and the second round of the French presidential election.

The performance was called “France in Trance” and, according to the author of the idea, Paulė Bocullaitė, the beverage drunk by the participants represented the blood that Ukraine sheds in defense of democratic values, while countries that recognize these values, in the background of genocide in Ukraine, only care about the deterioration of their economic conditions.

Another goal of the performance was to protest the possible victory of Marine Le Pen in the French elections, whom the protesters called a “homophobic Kremlin-linked populist.”