What does the Article of the BBC Say about the Number of Killed Russian Soldiers in Ukraine? 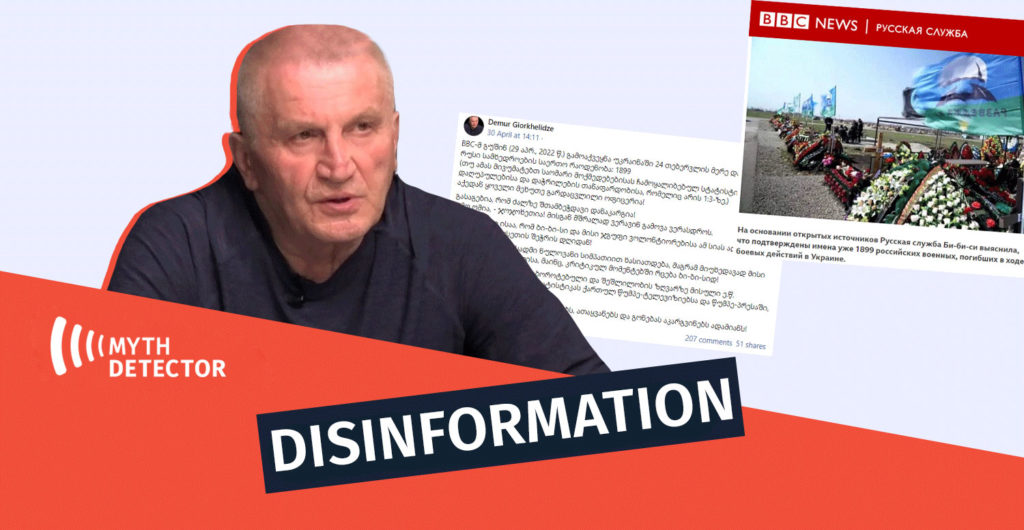 On April 30th, the former Georgian MP, Demur Giorkhelidze, published a post about the number of killed Russian soldiers in Ukraine. Giorkhelidze alleges that the total number of Russian soldiers killed in Ukraine after February 24th is 1899, and he uses the BBC as the primary source. The post also mentions that a group of BBC volunteers has been counting the number of dead Russian servicemen since the day of the Russian invasion of Ukraine, while Georgian televisions are spreading incorrect statistics. 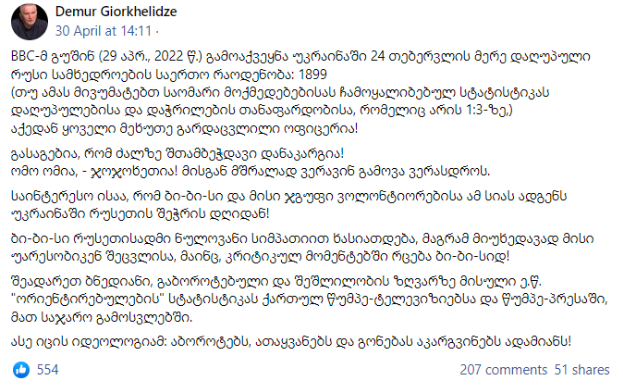 The post disseminated on social media is false. The data published by the BBC do not reflect the total number of Russian servicemen killed in Ukraine, but the number of servicemen who could be identified by the BBC Russian team based on open sources.

The data published by the BBC show the number of soldiers who could be identified by the BBC Russian Service based on open sources.

Nowhere in the BBC article is it mentioned that the indicated number represents the total number of Russian soldiers killed in Ukraine. Notably, the BBC research is based only on published data that contained specific information about the dead, including the full name, rank and burial place. The article further mentions that in some regions of Russia, journalists and relatives of the victims spoke about cases of pressure on them by the local administration. Local administrations demanded that information about buried soldiers and officers should not be disclosed; According to the BBC, the names of the soldiers killed in Ukraine were named by representatives of the administrations of the Russian regions, local media and the institutions where the soldiers studied. The Russian service of the BBC was able to identify several surnames through the volunteers who discovered new graves of Russian soldiers in the cemeteries in March and April 2022.

The BBC study found that 19% of those killed had various ranks – from junior lieutenant to general. About 20% of the identified casualties served in the Air Force, and most of them lived in depressed or semi-depressed regions of Russia. Most of the identified victims were from Dagestan (at least 130 killed) and Buryatia (at least 90 killed). Victims were reported in all but two regions of Russia (Nenets Autonomous District and Yamal-Nenets Autonomous District).

The last part of the article presented the data disseminated by the Russian Ministry of Defense, as well as by the Armed Forces of Ukraine. According to the BBC, the Russian Ministry of Defense officially announced the losses on March 25th, and according to them, only 1351 soldiers were killed in Ukraine. The Ukrainian Armed Forces name a much larger number, and they say more than 20,000 Russian soldiers were killed during the war in Ukraine.

As early as the end of March, according to data published by NATO, Russia had lost between 7,000 and 15,000 troops in Ukraine in six weeks. According to the data published by the Ministry of Defense of Ukraine on May 2nd, in the period from February 24th to May 3rd, about 24,200 Russian servicemen were killed in Ukraine. The Russian Defense Ministry has not released any updated information about Russian servicemen killed in Ukraine since March 25th.

Demur Giorkhelidze was a member of the Parliament of Georgia of the 5th convocation in 1999-2004 by party list from the election bloc “Union of Citizens of Georgia”. Recently, he has been appearing as a frequent guest on “Alt-Info” television programs founded by the pro-Russian “Conservative Movement.”

False information spread by Giorkhelidze has been fact-checked by the “Myth Detector” in the past as well. For more, see: