What does Graphene Oxide have to do with Vaccines, Melania Trump’s Dress and Tattoo Artist? 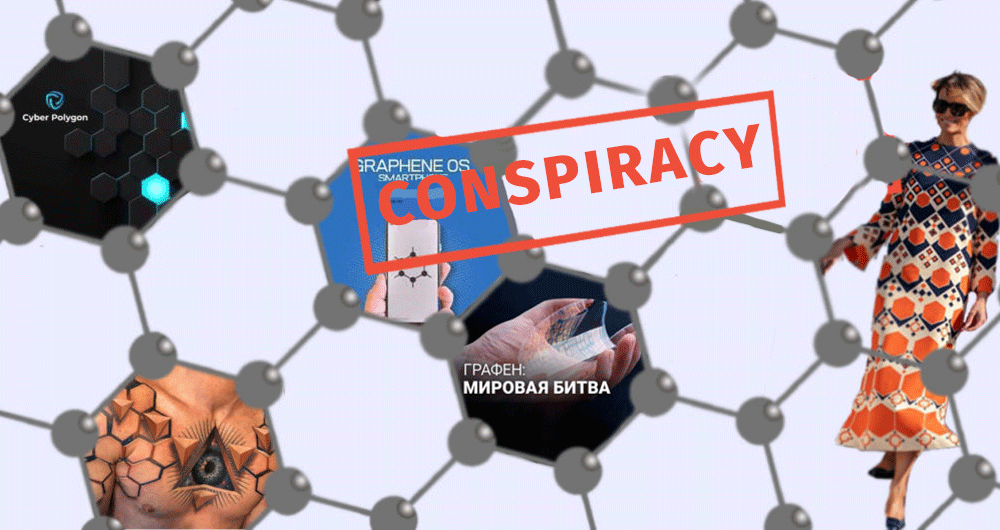 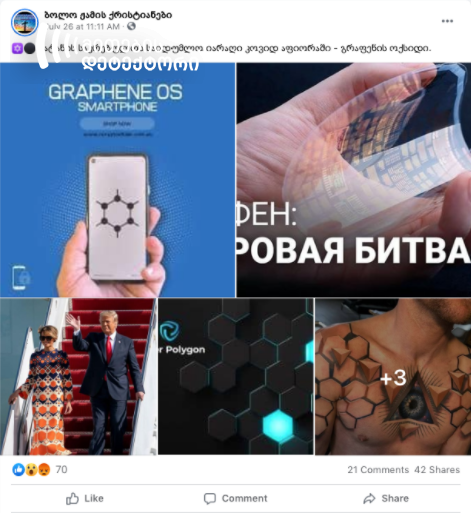 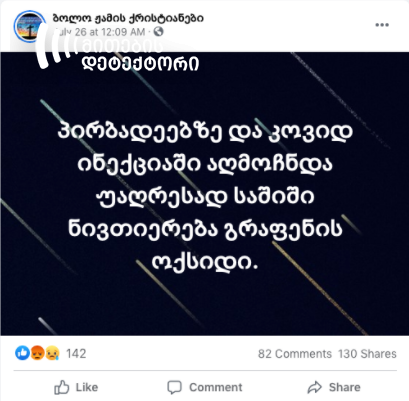 Posts and pictures are not the only tools used to support the claim. On July 26th, Catrine Maraneli, a Facebook user, has uploaded a video that allegedly showcases the analogue of the spread of Graphene Oxide, which also includes an identification code. In addition, the page “Bolo Jamis Kristianebi” has also published a Russian video, which claims that the research carried out in Spain has uncovered the particles of Graphene Oxide in COVID vaccines. 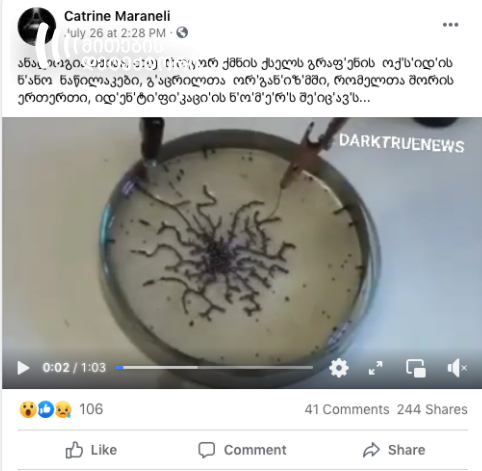 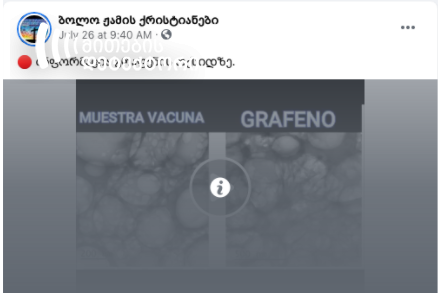 The disseminated information as if COVID vaccines contain Graphene Oxide is false. As of today, no authorized vaccine contains Graphene Oxide. As for the photos published by the page “Bolo Jamis Kristianebi,” they have nothing to do with the vaccines and, in most cases, portray a mobile operating system, the dress of Melania Trump, the work of an American tattoo artist and more.

What are Graphene and Graphene Oxide?

Graphene is a material made of carbon atoms that are bonded together in a repeating pattern of hexagons. Graphene was first discovered in 2004 in the mesoscopic laboratory of Manchester University by Andrey Geymm and Konstantine Novosiolov. The term graphene signifies the two-dimensional layer of carbon, which represents the main structural element of graphite.

Graphite is obtained by placing layers of Graphene on top of each other
Photo: technobyte.org

No other material has the breadth of superlatives that Graphene boasts, making it ideal for countless applications. It is many times stronger than steel yet incredibly lightweight and flexible. It is electrically and thermally conductive but also transparent. Research on Graphene is carried out in transport, medicine, electronics, energy, defence, desalination and its full potential is yet not realized.

As for the Graphene Oxide mentioned during the Georgian anti-vaxxer campaigns, it is a single-atomic layered material made by the powerful oxidation of graphite. Graphene Oxide is planned to be utilized in various industries in the future; nonetheless, currently, it is only being used for flexible electronics, solar cells, chemical sensors and more. GO is even studied as a tin-oxide (ITO) replacement in batteries and touch screens.

Declaring Graphene Oxide as Satan’s Secret Weapon is a Conspiracy

Graphite Oxide has become a tool for spreading another conspiracy around the covid vaccines. The images posted by “Bolo Jamis Kristianebi” aim to link the substance with the “covid fraud” and equating it with Satan’s secret weapon. Nonetheless, these images are taken from various sources and have nothing to do not only with the varus and the vaccines but also with each other as well. 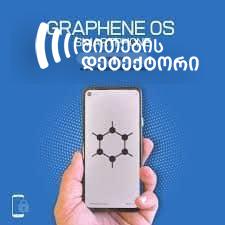 The picture is not anyhow linked with the Graphene Oxide, as it showcases the free mobile operational system GraphineOS, which was created for Android phones and aimed to become an alternative to Google in the areas of personal data protection and more security overall.

The image was taken from the YouTube video called “Graphen: The battle of the world” and was uploaded by the TV channel Шаг России. The video discusses the traits of Graphene, its future potential, and its inevitability to be massively produced. 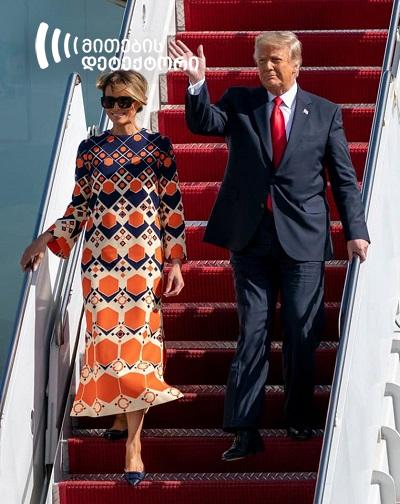 The image was taken on January 20th, 2021, during Joe Biden’s inauguration, after Donald and Melania Trumps have left the white house and arrived in Florida. The former first lady of the United States was wearing an orange Gucci hexagon dress. The only similarity between Melania Trump’s dress and Graphene Oxide share in common is the six-angled geometric shape. Hexagon shape can be detected in nature as well. Many chemical elements have a hexagon shape, including Graphene, 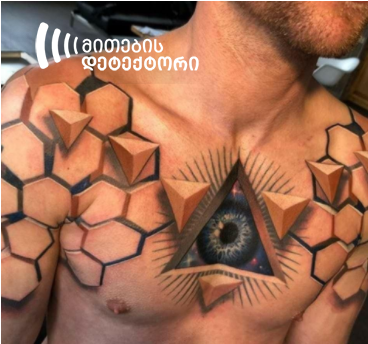 The picture showcases one of the works of the American tattoo artist Jesse Rix. Rix is famous for his three-dimensional tattoos and often uses hexagon-shaped objects in his work. 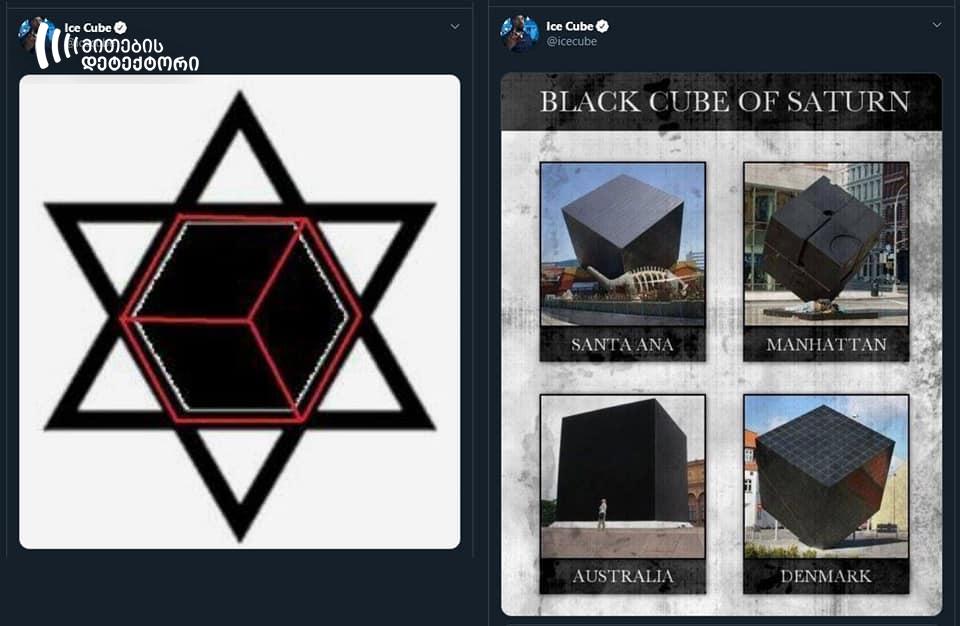 The image showcases the June 11th, 2020 Twitter posts of the American rapper Ice Cube. The rapper has published pictures of black cubes located in California, New York, Denmark and Australia, which are said to be occultistically linked with each other. In another post, Ice Cube has published an image of the Jewish Star of David having an occult cube in the centre, which aimed to spread anti-semitic conspiracy. The rapper has been found spreading anti-semitic conspiracies in the past as well. Therefore, the posts of Ice Cube have nothing to do with the coronavirus and the vaccines. 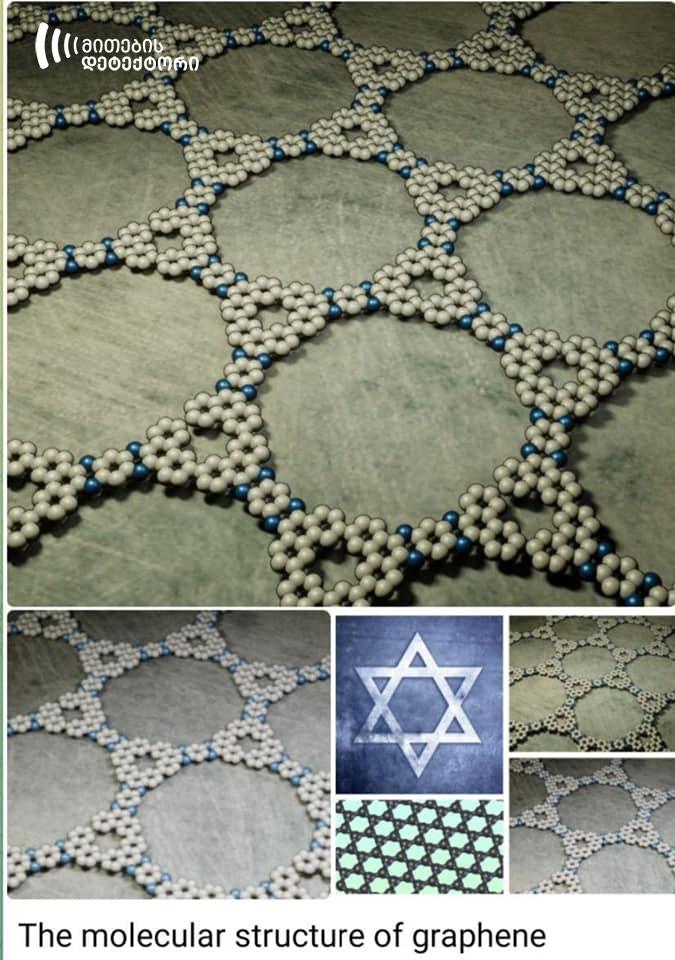 Similar to image 6, one part of the picture includes a cube placed in the centre of the Star of David, which has nothing to do with the rest of the images. The photo showcases the molecular structure of the Kagome Graphen, which differs from the Graphene Oxide. Physicists from the University of Basel have produced a graphene compound consisting of carbon atoms and a small number of nitrogen atoms in a regular grid of hexagons and triangles. This honeycomb-structured “kagome lattice” behaves as a semiconductor and may also have unusual electrical properties. Kagome Graphene has nothing to do with the virus and the vaccines.

The information about the Pfizer vaccine containing Graphene Oxide was first disseminated by Ricardo Delgado, the founder of the Spanish movement “La Quinta Columna.” Delgado used the visual similarity of the two substances to initiate the disinformation campaign. La Quinta Columna is also known for spreading conspiracies regarding the 5G waves of the COVID-19 pandemic..

The information became viral on the Spanish Telegram platform and was later translated to other languages as well. The falsehood of this information was confirmed by the French fact-checking organization Health Feedback. The organization noted that the claims about the similarity of the vaccines and the Graphene Oxide are based on some unknown test tube analysis. The University of Almeria confirmed the same information.

Nowadays, the list of substances contained by the covid vaccines is public and accessible to everyone. Reuters has even contacted one of the leading researchers of the Pfizer vaccine, who also confirmed that the Pfizer-BioNTech COVID-19 does not contain the Graphene Oxide.

The consistencies of Pfizer, Moderna, Johnson and Johnson, AstraZeneca, Sinopharm, Sinovac, and Sputnik can be found on the attached links. None of the listed vaccines contains Graphene Oxide. Myth Detector has been writing about the consistency of the vaccines even before. For more information, see our article:

What are the COVID-19 vaccine ingredients and how is Dulles linked to the WHO and Вечный зов?

Similar disinformation has been spread in Poland as well, where a local doctor has linked the covid vaccines with Graphene Oxide and proclaimed that the substance can be used to manipulate people’s minds, transform humans into super-soldiers manage the birth rate. The claims have been debunked by the Polish fact-checking organization FakeNews.pl.