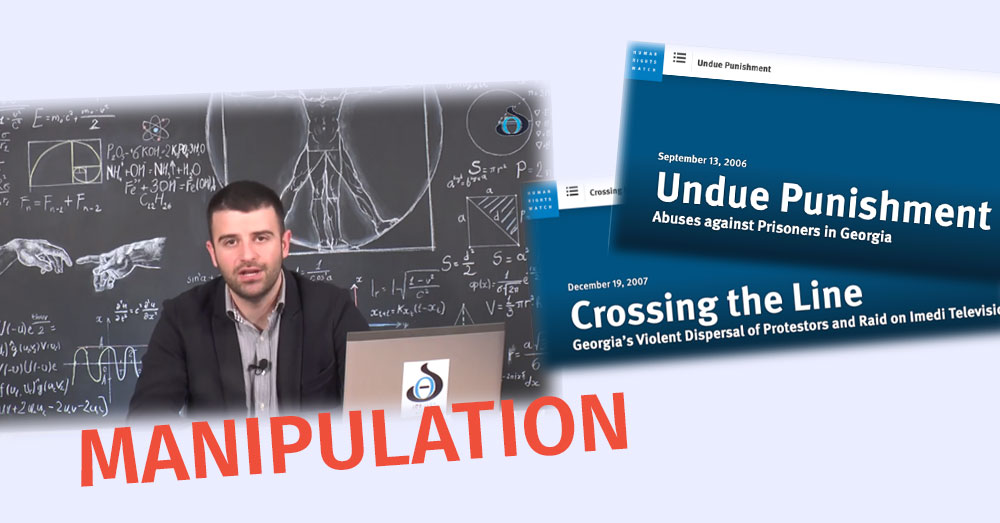 On January 13th, during the talk show ‘Alternative Vision,’ Giorgi Kardava, a member of the newly-created ‘Conservative Movement,’ spoke about a recently released report by Human Rights Watch. The report stressed that in 2021, Georgia experienced a setback in the field of human rights, noting that the events of July 5th demonstrate the inability of the police to prevent violent incidents. Kardava noted that human rights violations in Georgia were more common during Saakashvili’s rule, referring to the events of November 7th and May 26th, as well as the situation in prisons. Kardava further stressed that it is incorrect to compare these events to July 5th, and if these actions were to be repeated, HRW would have no response to it.

Giorgi Kardava, Conservative Movement: “During Saakashvili’s rule, the events of November 7th, the raid on TV Imedi, the killing of people in the streets… The events of May 26th… Not to mention the unprecedented things that were happening in penitentiaries… Comparing these events to July 5th is like comparing different dimensions… If the same period was to come back, Human Rights Watch would not make such reports, if a total of 300,000 people were to go through it again, be it their repressive policies in prisons, or on the streets, or on other TV channels, Human Rights Watch would still label Georgia as a beacon of democracy. This capitalization on authorities, that, look, Human Rights Watch said something about us, is very outdated.”

The claim that Human Rights Watch would not have reacted to human rights abuses in Georgia during the rule of the previous government is manipulative. In fact, HRW prepared reports on both the events of November 7th, 2007 and the problems in the penitentiary system. In addition, HRW officials assessed the excessive use of force during the events of May 26th, 2011 as unacceptable. Human Rights Watch about November 7th, 2007

The report stressed that the “government forces used violent and excessive force to disperse a series of largely peaceful demonstrations in the capital.” The report underscored that police used tear gas and rubber bullets to disperse the protesters and that most masked police officers chased away protesters of all ages, kicking them with sticks, batons and wooden sticks. The report refers to the raid on Imedi TV and assesses it as a restriction on freedom of expression.

Human Rights Watch, 2007: “The raid on and closure of Imedi television was a violation of Georgia’s commitments to guaranteeing freedom of expression. The legal basis for the decision to raid and close Imedi has been seriously called into question, and there is evidence to suggest that the legal basis was established after-the-fact and backdated.”

The report is based on interviews recorded by the organization with 35 participants and a representative of the Ministry of Internal Affairs during November 12-16, 2007, as well as responses received from the Prosecutor Office of Georgia. During the investigation, interviews were conducted with witnesses and victims of the dispersal, as well as with people who were inside or outside the “Imedi TV” building during the raid and witnessed the events live.

Notably, Holly Cartner, Europe and Central Asia director at Human Rights Watch stressed that “The November 7th police operations were not legitimate means of policing. They have done serious damage to Georgia’s reputation as a champion of human rights.” Cartner also noted that before November 7th, there were serious signs that the Georgian government was violating the basic principles of the rule of law and human rights.

Human Rights Watch has been constantly responding to ongoing processes and violations of prisoners’ rights in Georgian prisons.

The report claimed that despite the fact that the new government of Georgia initiated reforms in Georgian prisons, the documents presented in the report proved that human rights were still being harshly violated in the penitentiary system. The report also noted that most of the prisons were overcrowded, prisoners were malnourished, sometimes did not receive access at all or received poor quality medical care, and access to basic hygiene items was almost non-existent. The report further asserted that since December 2005, many prisoners have been beaten, ill-treated and sometimes tortured. On March 27th, 2006, 7 prisoners were killed and 17 were seriously injured as a result of a special operation carried out at the Fifth Penitentiary Institution in Tbilisi. The report is based on interviews with 110 inmates, government and non-government agencies carried out over the period of two weeks by an HRW team in Georgia. HRW researchers have personally visited several Georgian penitentiary facilities.

Notably, on October 25th, 2007, Human Rights Watch, in partnership with Amnesty International and Penal Reform International, called on the Georgian government to work more intensively towards ending torture and ill-treatment of prisoners in penitentiaries. A group of human rights organizations then drew attention to the fact that none of the participants in the special operation carried out on March 27th, 2006 in Tbilisi Penitentiary Establishment N5 had been charged. Holly Cartner said the delay in the investigation raised concerns and doubts as to whether establishing the truth was actually in the interests of the authorities.

The problems in the Georgian penitentiary system are also discussed in 2012, 2011, 2010 and 2009 reports on Georgia prepared by HRW. The reports are based on the findings of the Ombudsman of Georgia and international organizations such as the European Committee for the Prevention of Torture and Inhuman or Degrading Treatment or Punishment (CPT). Reports indicated that prison overcrowding remained a problem and that various human rights abuses still took place.Human Rights Watch About May 26, 2011

With regard to the events of May 26th, 2011, the same day, Human Rights Watch stressed that the government should’ve immediately launched a thorough and impartial investigation into the excessive and disproportionate use of force. Rachel Denber, HRW Deputy Director for Europe and Central Asia, called the events of May 26 unjustified.

Rachel Denber, Europe and Central Asia deputy director at Human Rights Watch: “Even if the Tbilisi demonstration was unauthorized, nothing can justify the beating of largely peaceful demonstrators.”

The events of May 26th were also included in HRW’s 2012 report, stating that on May 26th, 2011, police used rubber bullets, tear gas and water cannons against protesters. 160 demonstrators were arrested, many beaten, including those who did not resist. According to HRW, police obstructed the activities of Georgian and foreign journalists, physically and verbally abusing at least ten of them, and arrested two of them.

Manipulative claims that the US, EU and non-governmental organizations did not react to the human rights violations during the UNM era are rather common. For more on the topic, see the articles prepared by “Myth Detector:”