What Do We Know About the Drone ‘SEAFOX’ and How Is It Linked with the Explosion of North Stream Pipelines? 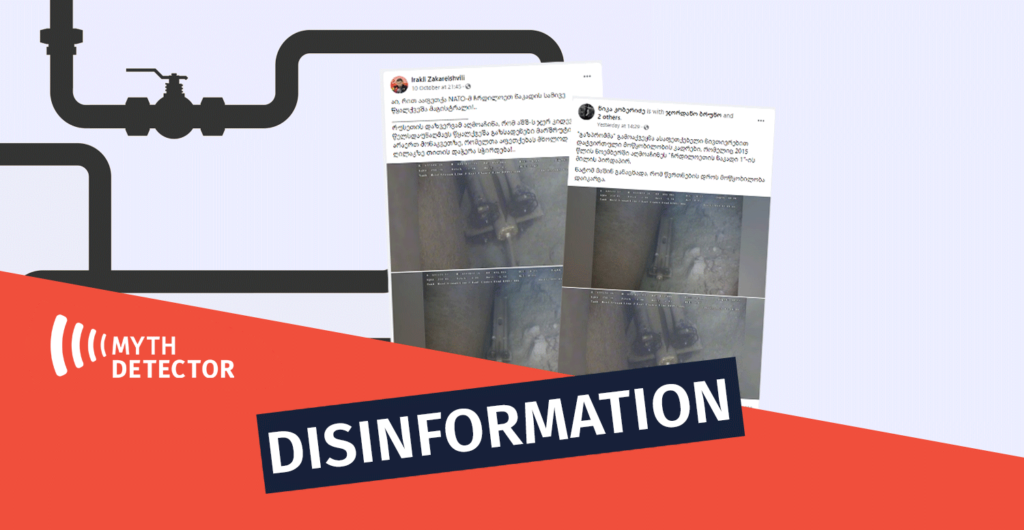 On October 10th, Georgian-langiage Facebook users “Irakli Zakareishvili” and “Nika Koberidze” published photos of an underwater device, claiming that NATO blew up all three underwater highways of the North Stream with the device shown in the photos. It was further argued that Russian intelligence discovered that the United States had mined an underwater gas pipeline in several sections in 2015, making it easy for them to detonate it at any given moment. Facebook user Nika Koberidze further argued that, in 2015, NATO said the device was lost during training operations.

Similar information was disseminated in the Russian government media as well. The story published by Russia’s Channel One on October 10th noted that in 2015, NATO’s Seafox anti-mine drone was discovered during a routine inspection of the Nord Stream. According to the story, Seafox was neutralized by the Swedish side, while NATO officials said the device was lost during the exercises. On October 11th, the Ministry of Foreign Affairs of Russia published identical information on its official Facebook page.

The posts mentioned above contain false claims: the Seafox drone found near Nord Stream 1 in 2015 belonged to Sweden, and NATO officials have not claimed to have lost the drone. Also, there is no evidence that this device inflicted the September 2022 gas pipeline damage or that NATO is responsible for it.

On November 6th, 2015, during a scheduled inspection of the North Stream 1, military material was indeed found, leading to the temporary shutdown of the pipeline’s second line. The device was found in Sweden’s special economic zone, about 120 kilometres from the island of Gotland. On November 12th, 2015, an announcement was made on the official website of Nord Stream that the Swedish Armed Forces successfully managed to neutralize the found device and that the gas supply was resumed.

According to a statement published on the official website of the Swedish Armed Forces on November 17th, 2015, as a result of the analysis, it was determined that the device is a Swedish remote-controlled ship – Seafox, which the Swedish army uses mainly for demining. The ship went missing during exercises in the spring of 2014 after a special cable that keeps it in motion broke. The statement also mentions that the ship did not pose a threat to the gas pipeline, as it has a built-in self-neutralization function.

The Swedish army moved the device to a safe place and destroyed it. According to the Swedish media, the army has conducted a similar operation before.

According to some reports, the exercises referred to in the statement by the armed forces may be Open Spirit, which is held annually. In May 2014, the mentioned exercise was held in the maritime space of Latvia and involved 13 countries. The purpose of the training was to find and destroy explosive devices left over from the First and Second World Wars in the Baltic Sea.

The story on Russia’s Channel One includes screenshots and a quote from a November 7th, 2015, article in the Norwegian publication The Local. The article mentions that the origin of the device is unknown. Also, the article was published before it was determined that the device was a Swedish remote-controlled craft.

Notably, the Russian state-controlled media did not link Seafox with NATO in the articles published in November 2015. On November 7th, Russia Today wrote that the origin of the discovered device is unknown and that, according to the Swedish Armed Forces, it does not pose a threat. And on November 17th, RIA Novosti confirmed in its article that the discovered device is the Swedish Seafox. Accordingly, in 2015, neither Russian nor Western sources talked about the connection of Seafox with NATO.

Zakareishvili’s post also voices the claim that Seafox was used by NATO to blow up the gas pipelines of the North Stream.

Following the explosions on September 26th, 2022, the Nord Stream 1 and Nord Stream 2 gas pipelines were damaged in four different spots. Two of them are located in the exclusive economic zone of Denmark and two of Sweden: therefore, the special services of these two countries started the investigation. On October 6th, the Swedish Security Service published the results of the investigation confirming that the damage to the gas pipelines was the result of explosions, which strengthens the suspicion that the incident was sabotage. The statement did not mention the Seafox or any other specific equipment used to damage the gas lines. Also, there are no confirmed reports about who is responsible for the incident; therefore, the claim that NATO member states are behind the explosions and they used Seafox drones for this is not based on evidence.