What Do We Know About the Cases that Are Attributed to the Side Effects of Vaccines? 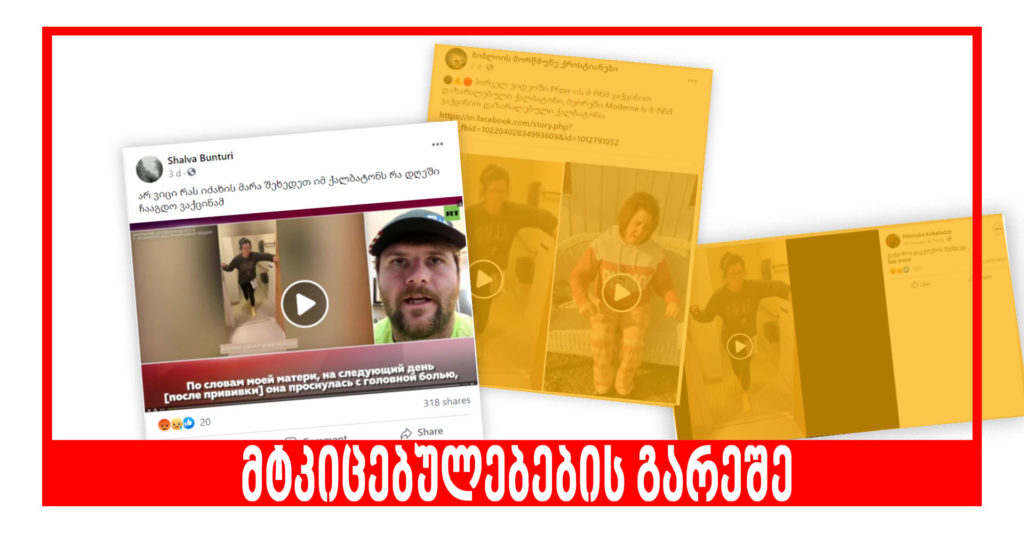 Since January 15, videos of two women having trouble moving or speaking due to tremors has been actively disseminated on Georgian web in the context of side effects of the coronavirus vaccine. On January 20, a Facebook page „ბიბლიის ერთმორწმუნე ქრისტიანები“ (Bible’s coreligionist Christians) shared both videos from a foreign user with a caption – “Woman damaged with Pfizer’s mRNA vaccine shown in the first video, and a woman damaged with Moderna’s mRNA vaccine in the second one”.

Shalva Bunturi, a Facebook user, uploaded a TV report by Russia Today to his profile on January 18, where the woman’s son is talking about her condition and this adverse effect of Pfizer’s vaccine with his mother’s video on the background.

Mamuka Kobaladze, another Facebook user, published the video used in RT’s report on January 15 showing the woman having trouble walking. The video came with a caption “After the vaccination”. 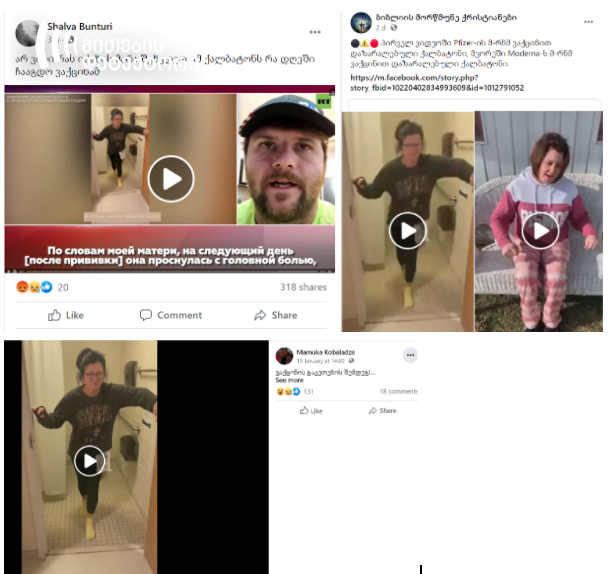 Based on the existing information, it is impossible to confirm that the state of strong tremors was caused by the vaccination. Fifty-one million people have been already vaccinated in the world and such side effects have not been described in any country. There is no proof that the woman coming out of the bathroom with tremors has actually been vaccinated.

Both videos have been circulating virally in the world as an alleged proof of the adverse effects of the anti-coronavirus vaccine. An American fact-checking platform PolitiFact studied the cases in detail.

The first video shows Shawn Skelton, who uploaded the video to her Facebook account (she has since then removed the video, but it can be found on other Facebook profiles). 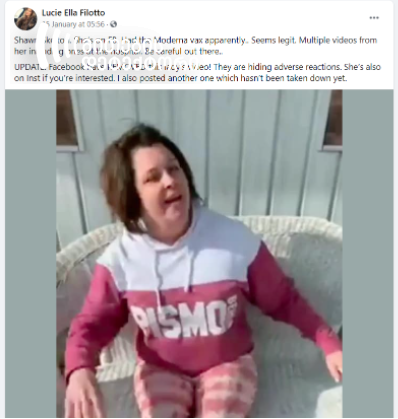 As Skelton mentions in the video, she got vaccinated with Moderna’s vaccine on January 4 (Monday) and got tremors of the entire body on Thursday. Skelton claimed that nobody could convince her that this was not caused by the Moderna vaccine. According to her, her questions were answered neither after a CT-scan and MRI, nor after a blood test. Skelton’s fiancée noted that doctors connected Shawn’s condition to stress. According to the Centers for Disease Control, such adverse effects (tremors, movement and speech difficulties) are not characteristic to the anti-coronavirus vaccine.

PolitiFact tried to contact Skelton, however, she has not replied to the questions.

The woman that can be seen profusely shaking while leaving the bathroom in the second video is Angelia Gipson Desselle. The video was spread by her son, Brant Griner, on January 13, claiming that his mother’s condition was due to Pfizer’s vaccine. On January 19, he deleted the video from his page, although it can still be found on other users’ news feeds. 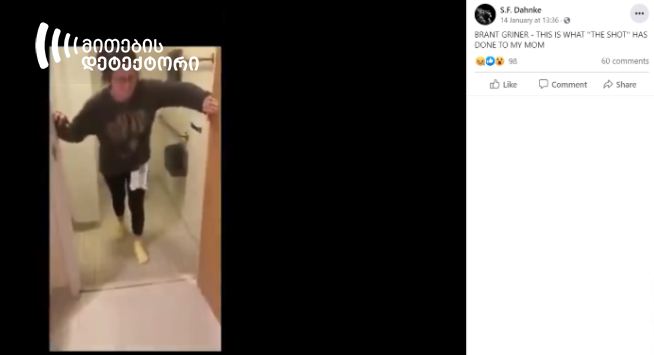 PolitiFact got in touch with Angelia Gipson Desselle and Brant Griner, but only got a reply from Griner. As he claims, his 45-year-old mother, who works at a medical clinic, got vaccinated on January 5 (Tuesday) in New Orleans. On Saturday, she had trouble moving due to tremors, so she went to the hospital. PolitiFact tried to find out whether Desselle had actually been vaccinated, but Griner left all the questions – the location his mother got vaccinated, which hospital did she go to after the appearance of symptoms, and which doctor treated her – unanswered during the 30-minute phone call.

On January 19, PolitiFact also contacted the clinic where Desselle works, but did not receive any answers. On the same day, Brant Griner deleted the video and explained that bosses and coworkers of her mother were unhappy, so they asked her to delete the video and stop talking about this topic with others.

Kevin Litten, a spokesman for the Louisiana Department of Health, said state officials aren’t aware of anyone reporting severe convulsions or neurological side effects caused by the vaccine. He claimed that there was only one person that had a serious effect that warranted a hospitalization. The symptom was gastrointestinal distress and lightheadedness. That person has already been released from the hospital.

Jason McDonald, a spokesperson with the CDC, told PolitiFact in an email that the agency has “no adverse event data regarding a case of this nature out of Louisiana.” McDonald also explained that the COVID-19 vaccines are effective and do not result in any adverse effects in many people, however, in certain cases, some adverse effects have been identified (headache, pain at the site of injection, fever), This, he claimed, only indicates that the body is trying to protect itself from the virus. Moreover, strong and continuous tremors were not in the list of side effects, described in the clinical trials of the Pfizer and Moderna vaccines.