What do We Know about Stonehenge Replica Located in the State of Georgia? 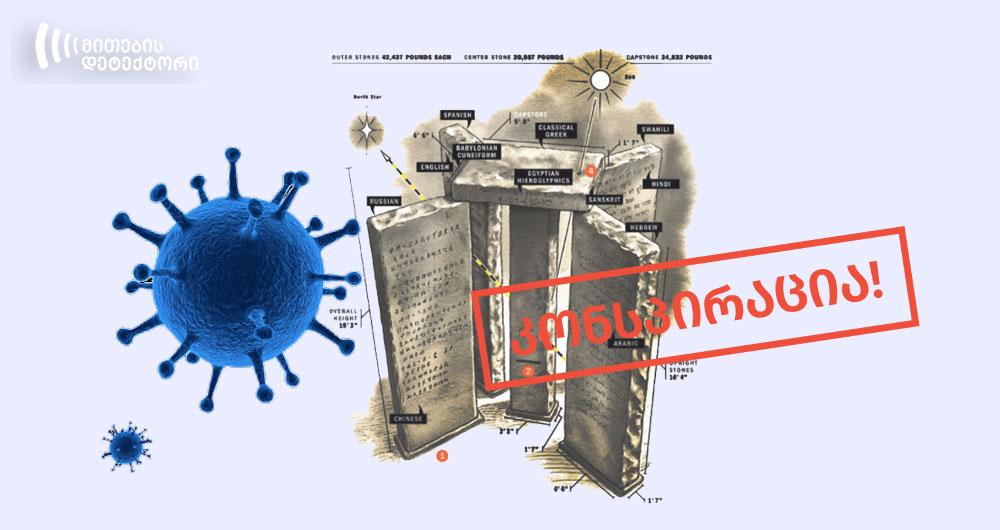 On March 26, 2021, Facebook user Daji Mamulashvili published a post about a granite monument located in the State of Georgia, claiming that the monument has inscriptions in several languages according to which the world population should be 500,000. Daji Mamulashvili notes that this inscription shows in which direction they are leading the world, adding that that is just why the pandemic emerged. The post is accompanied by the photo of the monument as well as the inscriptions engraved on it. 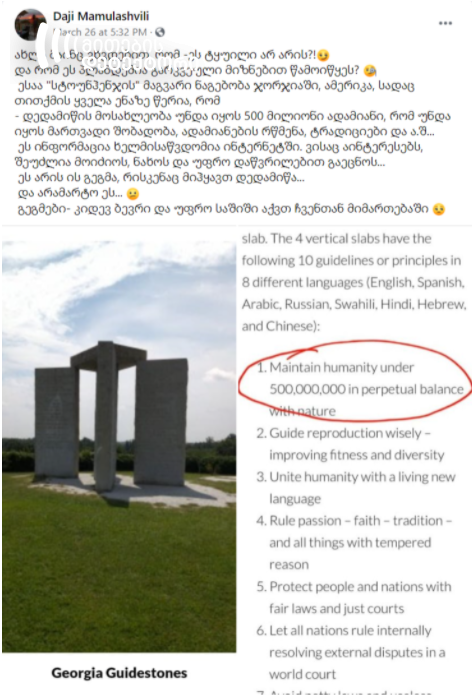 The post published by Facebook user Daji Mamulashvili is conspiratorial, because there is no reliable evidence to prove the link between the monument and the COVID-19 pandemic. The monument has long been one of the sources of a conspiracy theory about the New World Order.

photo provided by Daji Mamulashvili to back up her words actually depicts a granite monument erected in the State of Georgia in 1980. monument consisting of granite slabs has 10 sentences inscribed in eight languages. Due to its structure, the monument is frequently dubbed as American Stonehenge. It is unknown who is the author (s) of the monument. The anonymity and the content of inscriptions are key factors prompting conspiracy theorists to target the monument. According to the most widespread interpretations, the monument involves a set of guidelines for rebuilding civilization after the apocalypse.

The photo uploaded by the Facebook user is real and such inscriptions advocating population control, eugenics, cosmopolitanism and pacifism do exist on the monument. Despite the authenticity of the photo, the monument erected in 1980 has nothing to do with the COVID-19 pandemic and it is a continuation of the conspiracy theory claiming that the pandemic was created artificially to control the population. Moreover, the granite monument represents a private property, which is located on a private territory and belongs to the company Elberton Granite Finishing. A man named Robert Christian consulted his ideas about building the monument with the president of Elberton Granite, claiming to represent “a small group of loyal Americans.” Christian explained that the structure he had in mind would serve as a compass, calendar, and clock. It would also need to be engraved with a set of guides written in eight of the world’s major languages. And it had to be capable of withstanding the most catastrophic events, so that the shattered remnants of humanity would be able to use those guides to reestablish a better civilization than the one that was about to destroy itself. 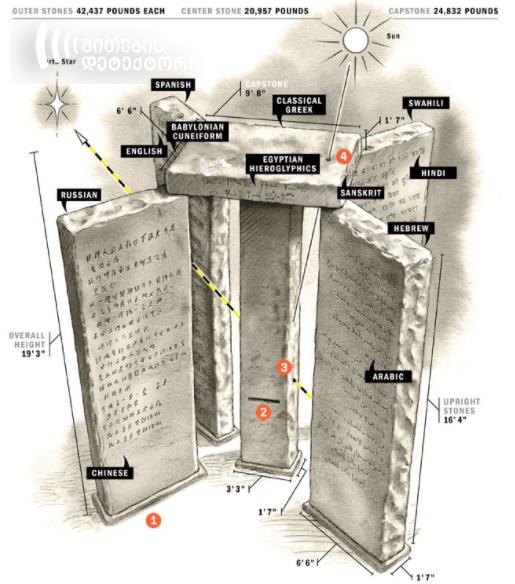 The monument was attacked by vandals on multiple occasions and most attacks were linked to conspiracy theories. During one of such attacks, vandals spray-painted with graffiti, including slogans like “Death to the new world order.”

Importantly, it is not the above mentioned Facebook user only who talks about the links between the granite monument and the coronavirus. Information about the pandemic and the New World Order was also spread by Russian media outlets and social networks. For example, on March 22, 2020, at the beginning of the pandemic, александр колесников uploaded a video to his YouTube channel, in which Russian doctor Evgeni Bozhev promotes a theory about the link between COVID-19 and the monument located in the State of Georgia. The video in question spread widely on various Russian websites. But presently it is no longer available on these websites. 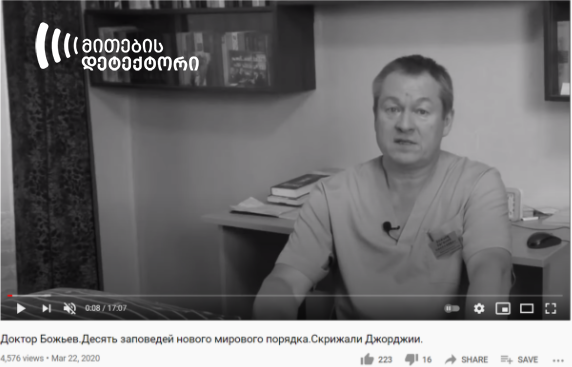 Another Russian online media outlet Абзац also spreads information about the link between the pandemic and the monument. The article published by this media outlet on April 19, 2020 reads that the coronavirus is used as the tool to achieve the New World Order. 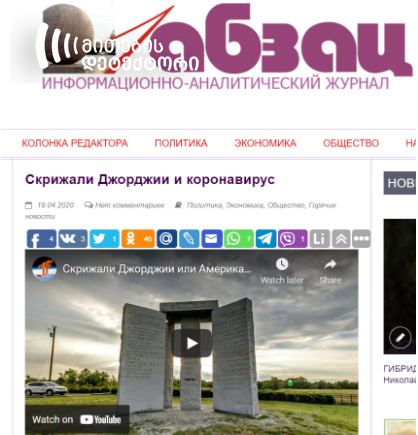