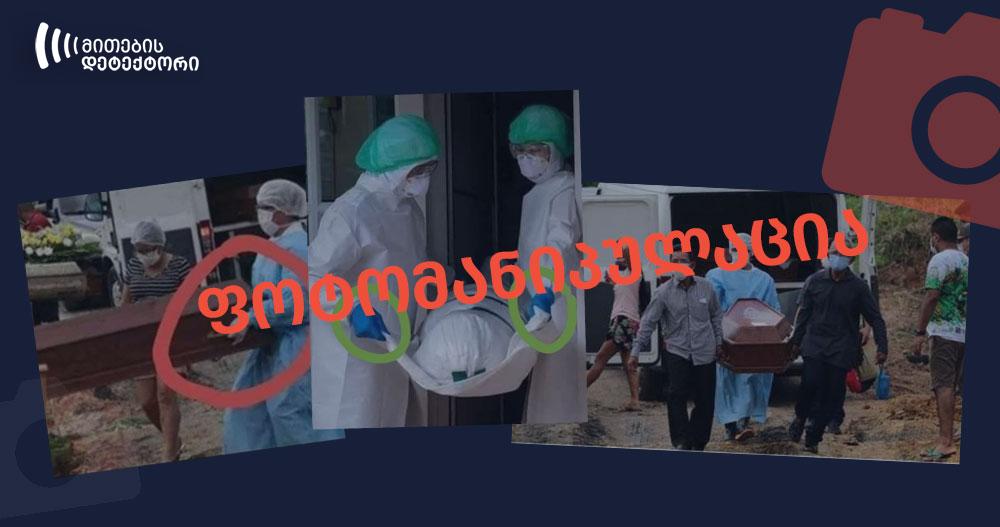 On March 25, a Facebook page „ახალგაზრდული“ (For young people) published three photos with the following caption: “Respect to those who figured it out and did not get tricked ? Corona-scam with Bollywood-like special effects ?”. The photos show the process of transporting body bags, and the way medical staff hold the bags, allegedly containing corpses, is emphasized. Hands of the medical staff are circled. The description of the post does not indicate it, but the author most likely means that the body bags are light. 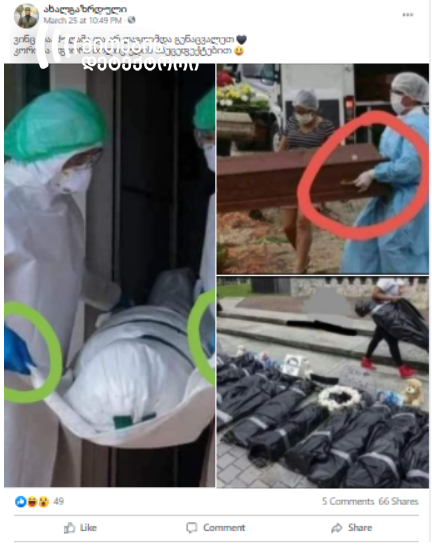 The content of the post by “For young people” is manipulative. It questions the existence of the coronavirus, but demonstrates photos without any additional context to illustrate it, ultimately misleading the readers. In fact, two out of the three photos do not show actual corpses – one is a stock photo, while the other photo shows a performance. As for the third photo, it had been manipulatively cropped.

The photos, published by “For young people”, appeared on Facebook already on November 30, 2020. Reverse Image Search reveals that all the three photos have been disseminated on social media in various countries with a manipulative description – meaning that they questioned the pandemic-related tragic cases and real figures. Correctiv.org, a German investigative journalism edition, and AFP Faktencheck both fact-checked the photos. 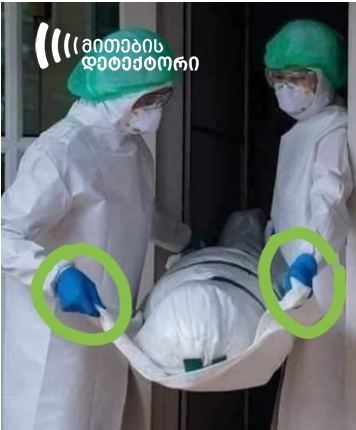 The photo can be found in the database of stock photos and belongs to EyeEM agency. The original photo is available on the agency’s webpage. Tineye search shows that the given photo has been published on Stock adobe and Shutterstock as well. 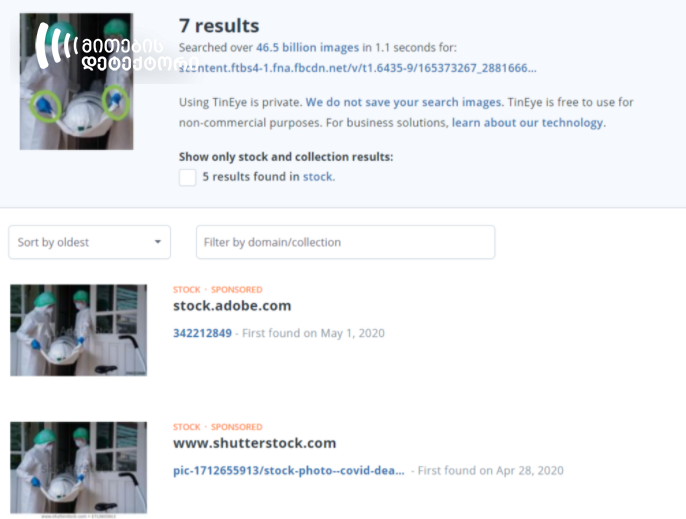 In addition, Correctiv contacted the agency. Their agency representative noted that this is indeed a staged photo. He added that it is available in the database and has no relation with the coronavirus deaths. Companies, publishers, and other organizations or individuals use such stock photos as visualizations for their articles, webpages, or other materials.

The second photo has been cropped manipulatively. In fact, three people are holding the coffin, not one. Brazilian edition Folhapress published the original photo on November 19, 2020. 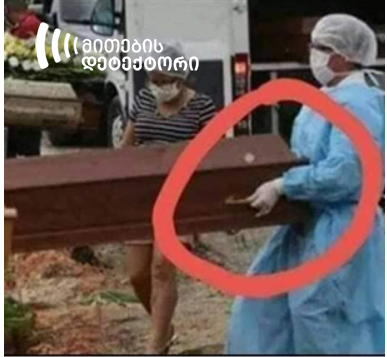 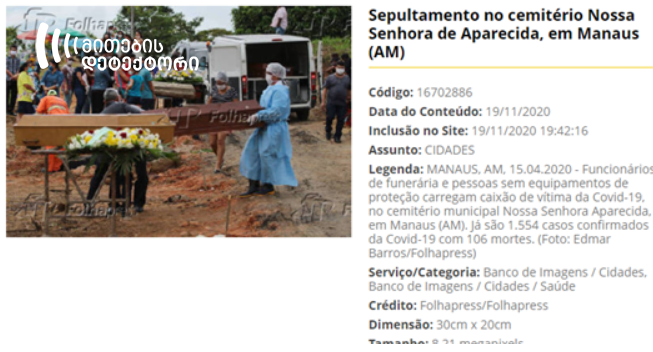 Moreover, AFP Faktencheck contacted the author of the photo, who stated that the coffin was indeed not empty and it showed a burial of a person who died from COVID-19 in April 2020. The cropped version of the given photo has also been disseminated in Brazil and it has been fact-checked by Brazilian editions Lupa and Extra as well. 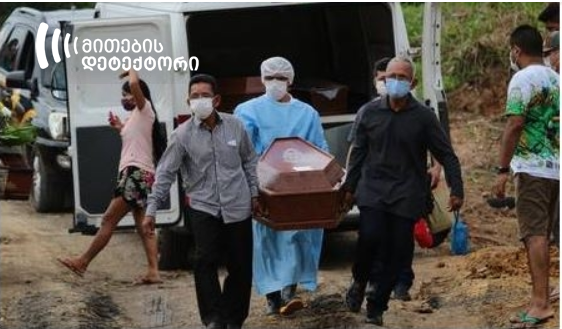 Source of the photo screenshot: Extra

As the Reverse Image Search in Yandex Search shows, this photo has been also disseminated manipulatively by various Twitter users too. 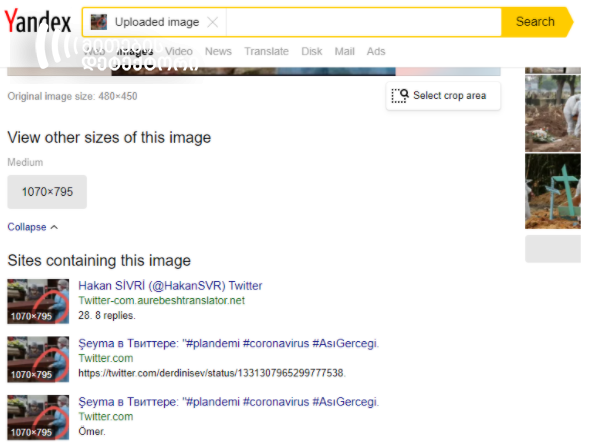 The third photo was fact-checked by Myth Detector on September 23, 2020 and determined that the photo actually shows another event and it was taken on May 27, 2020 in Miami, Florida. 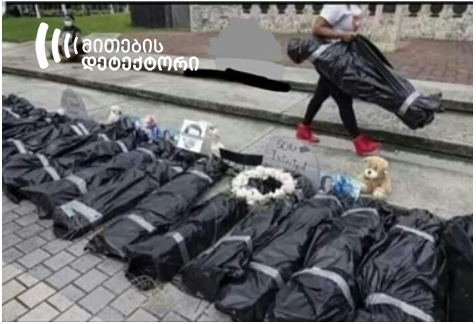 The photo shows a protest performance honoring those deceased from the coronavirus and protesting the insufficient reaction of the government to the unemployment caused by the pandemic. Protesters imitated a burial ceremony and placed black body bags on the street. 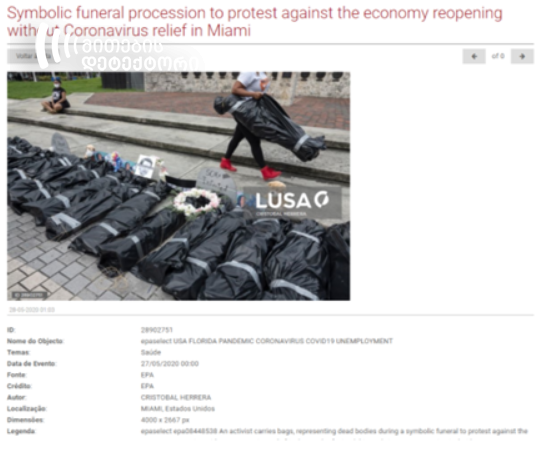