What Do the Most Recent Studies Show on Efficiency and Side Effects of AstraZeneca, Johnson & Johnson, and Other Vaccines? 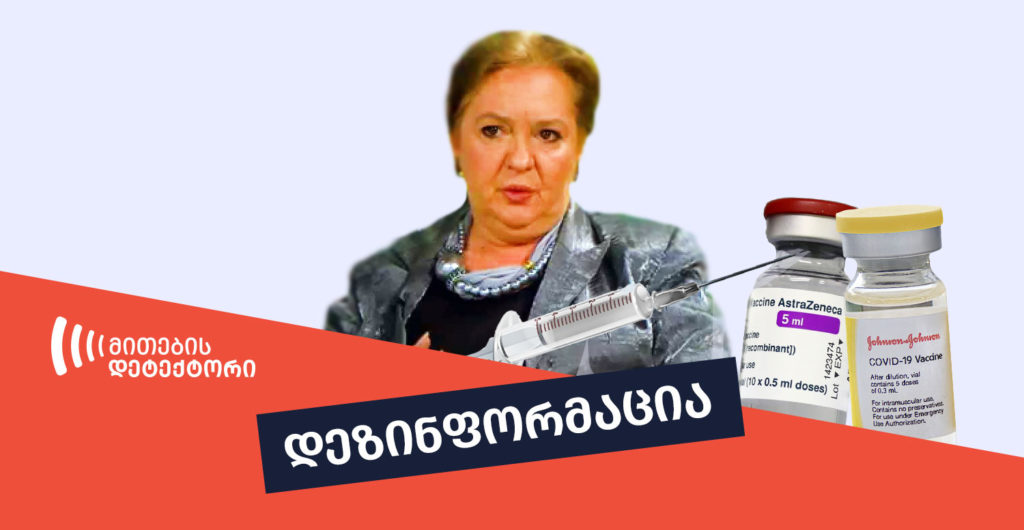 The video by Free Channel has since been deleted from Facebook, but Ucha Kakauridze, a Facebook user, re-uploaded the video to the social media website on April 26, 2021.

Results of the phase three trials of the AstraZeneca vaccine were published on December 8, 2020. They showed that the average efficacy of two doses of the vaccine was 62%, but it was mainly volunteers aged 18-55 that participated in the phase three trials. In January 2021, several EU countries banned the use of AstraZeneca for the people aged 65 and more, as there were insufficient data on the vaccine efficacy for this age group. Neither the European Medicines Agency (EMA), not the World Health Organization (WHO) this decision of the European countries.

New studies on the efficiency of the AstraZeneca vaccine in elderly people were published on March 1 and March 22. They showed that the efficiency of the vaccine reaches 70% among the people aged 65 and more. The study, published on March 1, was based on an analysis of the British vaccination program results. According to these data, the second dose of AstraZeneca is 73% effective against symptomatic COVID-19 among the people aged 70 and more, while the effectiveness reaches 80% among those aged 80 and more. At the same time, the majority of the EU countries re-introduced the AstraZeneca vaccine among those aged 65 and more.

Disinformation #2: The United States decisively refused the AstraZeneca vaccine, as the FDA rejected it due to not being useful.

In fact, AstraZeneca has not yet applied to FDA for an emergency use authorization. In March 2021, AstraZeneca published the results of a wide-scale study in the United States, showing 76% efficacy of its vaccine. The company stated that it planned to apply to the FDA in the first half of April, but it still had not applied as of April 26, 2021.

According to American experts, due to the contracts signed with Pfizer, Moderna, and Johnson & Johnson, the United States has more than enough vaccines to fully vaccinate its citizens, so the FDA can take its time with granting authorization to the AstraZeneca vaccine. As Anthony Fauci stated with CNN, the reason is not the AstraZeneca vaccine itself, but the needs of the United States, which are currently fully met by other manufacturers. Even if AstraZeneca is granted the authorization of the American regulator, the country is unlikely to order additional doses from the company.

Disinformation #3: The world now officially acknowledges that the coronavirus vaccines are not duly tested and the vaccinated are taking part in an experiment. In fact, the vaccine trials will end in 2023.

The disinformation that experiments involving the coronavirus vaccines are still under way and they will be over in 2023 was also disseminated in February 2021 by English-speaking Facebook users. It comes from a manipulative interpretation of Pfizer’s date for finishing safety monitoring. Observing the safety and side effects after the vaccine is approved is commonplace and regards not just the coronavirus vaccines, but all other vaccines and medicaments too. Pfizer intends to continue monitoring of the phase three trial participants until 2023. Continuing the monitoring in parallel with vaccinations does not mean that the vaccinated people participate in an experiment. Currently, there are more than 100 coronavirus vaccine candidates, with most of them still being on the trial stage, but all phases of trials are over for the vaccines, approved by the FDA or the EMA (AstraZeneca, Pfizer, Moderna, Johnson & Johnson).

Partly false #1: Studies on children aged 12-15 were soon halted in England and Canada, as the vaccine caused thrombosis among the study participants.

University of Oxford and AstraZeneca launched their vaccine trials on children aged 6-17 in February 2021. Up to 300 volunteers participated. On April 6, 2021, vaccinations of the trial participants were temporarily halted, but the reason was not thrombosis in children. The trial was stopped due to the ongoing investigation by the UK’s Medicines and Healthcare Products Regulatory Agency (MHRA) and the EMA due to a connection between the AstraZeneca vaccinations and rare cases of thromboembolism. As Prof Andrew Pollard from the University of Oxford stated with BBC, there are no more questions regarding the safety of the trial participants, but scientists are expecting additional information about the ongoing investigation.

On April 7, 2021, after studying the evidence, the EMA stated that unusual blood clots should be listed as very rare side effects of the AstraZeneca vaccine. On the same day, the MHRA announced that there is a possible link between “extremely rare, unlikely to occur blood clots”, but mentioned that benefits of the vaccination outweigh the risks. On April 23, the EMA published an analogous decision, claiming that the likelihood of developing a blood clot was 1 in 100,000.

Partly false #2: In the United States, the Johnson & Johnson vaccine has been halted indefinitely, as there were too many deaths among the vaccinated due to thrombosis.

On April 13, 2021, the FDA and the United States Centers for Disease Control and Prevention (CDC) disseminated a joint statement with regards to the Johnson & Johnson vaccine. They recommended to temporarily halt vaccinations using the said vaccine — until the Advisory Committee on Immunization Practices (ACIP) finishes studying the link between the vaccination and the rare cases of blood clots. As of April 12, 6.8 million doses of Johnson & Johnson vaccine have been administered in the US, with only six recorded cases of the rare blood clots. The number of cases increased to 15 on April 23 — still a low number bearing in mind that 8 million people had been vaccinated with the Johnson & Johnson vaccine. Three out of 15 patients died, while seven remain in the hospital. At the same time, CDC and FDA lifted the restrictions on the vaccination and stated that the benefits outweigh the risks, while the cases of thrombosis are extremely rare.

Manipulation: Vaccinated individuals pose threat to the unvaccinated, because the vaccine does not prevent the transmission of the virus. The vaccinated people become “asymptomatic transmitters” and are as contagious as the unvaccinated.

Another American study, which appeared in the beginning of March 2021, which looked at vaccinated medical workers, showed that 12 days after getting vaccinated, the risk of asymptomatic COVID-19 decreased four times. A study by the Harvard School of Public Health showed that one dose of the vaccine cuts the transmission risk by 61%. Another American study, published on March 29, 2021, showed that the Pfizer and Moderna vaccines reduced the risk of infection (both symptomatic and asymptomatic) among medical workers, firefighters, police officers, and teachers by 90%.