What do Amendments to Equality Act Envisage and Who Fabricates Biden Quote? 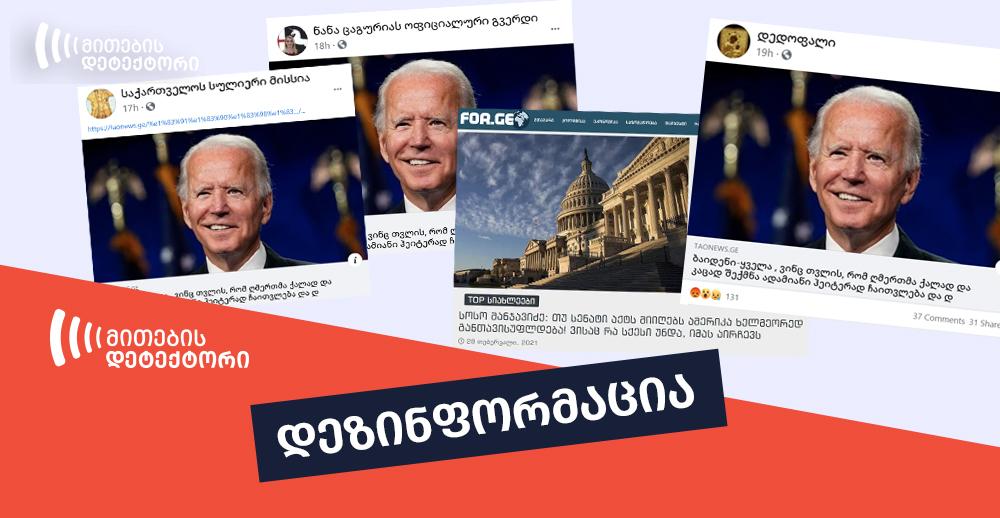 On February 28, Soso Manjavidze, a pro-government expert, published a post on Facebook. He claims that the U.S. Congress has passed the Equality Act, abolishing legal definition of biological sex. Manjavidze notes that everyone who believes that God created human beings as men and women will be considered haters and punished; moreover, anyone will be able to choose a gender; gender-specific words like “father” and “mother,” as well as single-sex toilets will be prohibited; children will choose their gender on their own, while religious views will be considered discrimination.

As of March 2, 12 noon, the post has 197 shares. For.ge published Manjavidze’s post in its Top News section. The post was also shared by Georgian Times, an online media outlet. Later Manjavidze’s post was also shared by Facebook page “საქართველო უპირველეს ყოვლისა” (Georgia First of All). Giorgi Gigauri, journalist of Georgian tabloid Asaval-Dasavali also published an similar post on his Facebook page. One more Georgian online media outlet, taonews.ge also focused on the Equality Act in its news article titled “Biden – Everyone who believes that God created human beings as men and women will be considered haters and punished,” claiming that the Act abolishes legal definition of biological sex. The news article was shared by საქართველოს სულიერი მისსია (Spiritual Mission of Georgia), დედოფალი (Queen) and ნანა ცაგურიას ოფიციალური გვერდი (Nana Tsaguria’s official page). This latter belongs to a member of the Georgian March ultranationalist movement. 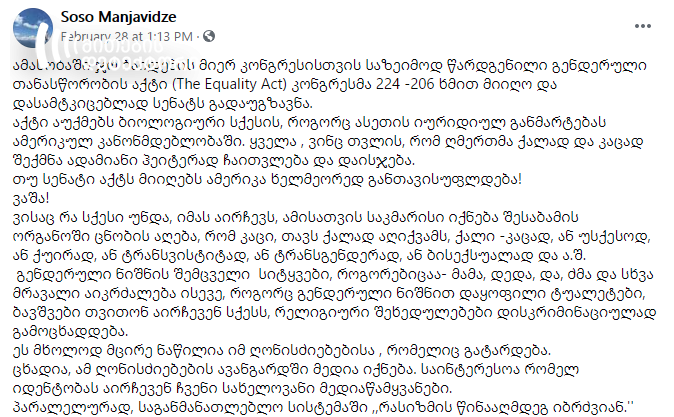 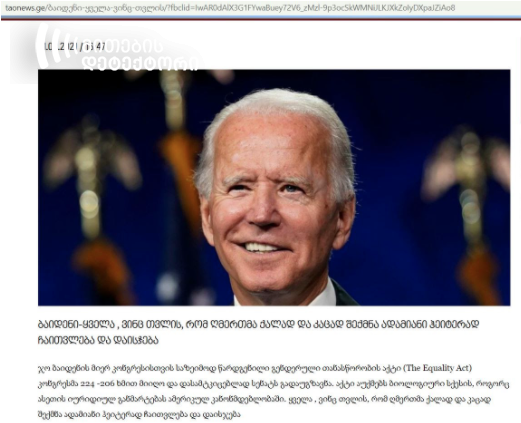 Manjavidze, Giorgi Gigauri and taonews.ge are making false statements when saying that everyone who believes that God created human beings as men and women will be considered haters and punished. Biden’s quote cited by taonews.ge in the headline of its news article is fake. Manjavidze’s and Gigauri’s claims as if the Equality Act will prohibit gender-specific words and children will be allowed to choose their gender are false.

The Equality Act says nothing about prohibiting gendered language. Soso Manjavidze’s remarks are apparently related to the new rules package for the U.S. House of Representatives adopted in January 2021 and envisaging the use of gender-neutral terms. House Minority Leader Kevin McCarthy made similar remarks on January 5, noting that democrats won’t let you say “gendered” words like “father” and “mother.” It is worth noting that the amendments were actually made to the text of the Rules Package for the 117th Congress and neither these amendments nor the Equality Act envisage any ban on gender-specific words.

The Equality Act says nothing about gender transition of either children or adults. The Act only notes based on numerous studies that LGBTQ youth are overrepresented in the foster care system by at least a factor of two and report twice the rate of poor treatment while in care compared to their non-LGBTQ counterparts. Barring discrimination in child welfare services is one of the purposes of the Equality Act.

Similar fake news was spread last year, when posts on social media falsely attributed a quote to Joe Biden in which he says that “If your 8 year old child says they want to be transgender to make life easier … they have a right to transition and there is no reason for you to deny it.” In fact, Biden responded to the mother of an eight-year-old transgender child, who asked him about the protection of LGBTQ rights. Biden responded that he would amend the laws approved by the Trump administration, stressing that “there should be zero discrimination” against transgender children. Biden said nothing about children’s transition.

Biden has not made any such remarks. When the Equality Act was introduced in the House of Representatives, the White House released Biden’s statement, reading that “no one should ever face discrimination or live in fear because of who they are or whom they love.” It is noteworthy that Biden himself is Catholic and he frequently speaks about his faith. In his inaugural address, he referred to Saint Augustine’s words:

“Many centuries ago, Saint Augustine, a saint of my church, wrote that a people was a multitude defined by the common objects of their love. What are the common objects we love that define us as Americans? I think I know. Opportunity. Security. Liberty. Dignity. Respect. Honor. And, yes, the truth.”

“All persons shall be entitled to the full and equal enjoyment of the goods, services, facilities, privileges, advantages, and accommodations of any place of public accommodation, as defined in this section, without discrimination or segregation on the ground of race, color, religion, or national origin.”

The Equality Act will amend the list by inserting “sex (including sexual orientation and gender identity),” before “or national origin.”

The Act also notes that an individual shall not be denied access to a shared facility, including a restroom, a locker room, and a dressing room, that is in accordance with the individual’s gender identity. The term ‘gender identity’ is defined as follows:

“Gender identity means the gender-related identity, appearance, mannerisms, or other gender-related characteristics of an individual, regardless of the individual’s designated sex at birth.”

In fact, the Inequality Acts aims to protect LGBTQ community against discrimination in securing access to public accommodations, education, public and other services.

One of the sections of the Equality Act notes that the Religious Freedom Restoration Act of 1993 (RFRA) cannot be used to challenge the act’s provisions, nor could it be used as a defense to a claim made under the act.

Similar act was first introduced in the Congress in 1974. The House of Representatives also passed the Equality Act in 2019. Since then, based on the Supreme Court ruling, the Act was further expanded in 2021. Earlier in 2020, the Supreme Court ruled into the case Bostock v. Clayton County with a six to three vote that the Civil Rights Act of 1964 also applies to discrimination against LGBT people at workplace. Justice Gorsuch writes in his opinion that discrimination against a homosexual or a transgender for traits or actions that would never have been questioned in members of a different sex is simply a form of sexual discrimination because of sex and is prohibited by current laws. The same ruling also applied to the similar case considered by the U.S. Supreme Court, where a transgender woman sued the employer for discrimination on grounds of gender identity and dismissal from job, although the employer cited religious belief as the reason behind its decision.