What did Ronald Reagan Mean when Saying “Fascism will Come to America in the Name of Liberalism”? 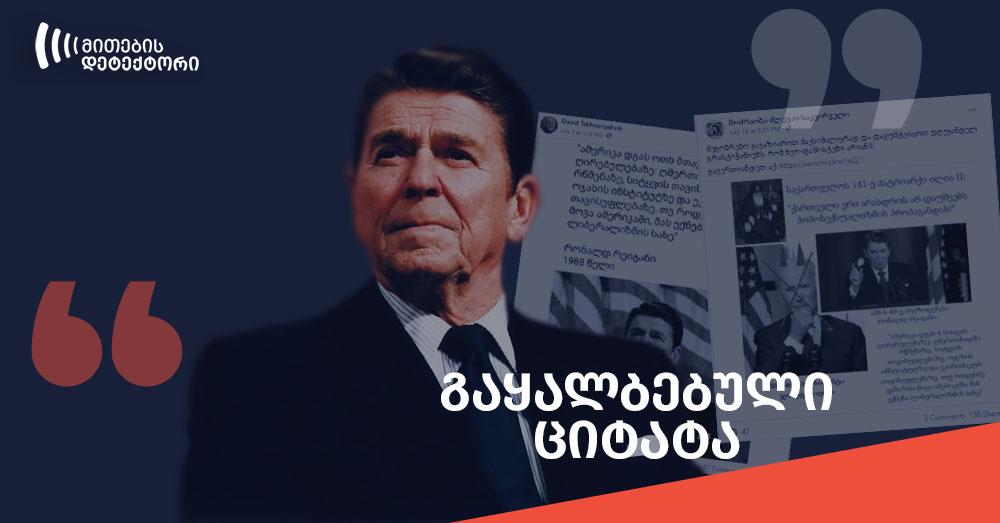 Over the course of the last couple decades, the world has witnessed an unprecedented spread of an omnipresent anti-Liberal discourse. In 2018, illiberal right-wing populist parties controlled at least 11 countries, compared to 0 in 1990. Viktor Orbán, the Prime Minister of Hungary, has officially stressed that his political vision was openly “illiberal,” while Poland’s incumbent party took on the same road, declaring liberalism as damaging. Nowadays, liberalism faces challenges on the different levels of political, social and cultural endeavours.

The country of Georgia is no exception.  Far-right platforms characterized with, on the one hand, ethnonationalism and, on the other hand, apparent pro-Russian sentiments actively utilize social media to demonize the West and shape the common sense around anti-liberal foundations.

Recently, a Facebook page called “Modzraoba Dzlevai Sakvirveli” [Movement Unexpected Victory] has published a photo collage involving Ronald Reagan, the 40th president of the United States, and a quote ascribed to him:

“America stands on four main values: Faith in God, Freedom of Speech, Family and Economic Freedom.  If fascism ever comes to America, it will come in the name of liberalism.”

The collage also involves the Patriarch of Georgia Ilia II and his quote stating that Georgians will never allow the propaganda of homosexuality. The image also includes Joe Biden, the 46th president of the US, who is marked in red and has devil horns painted on.

The quote of Reagan was also originally published by the user David Tskhvariashvili on July 5th, who indicated that the quote was dated back to 1988. The mentioned quote in this form was being circulated even before. (See: 1, 2, 3, 4, 5) It was even shared by the page “Kardhu” in November 2020. 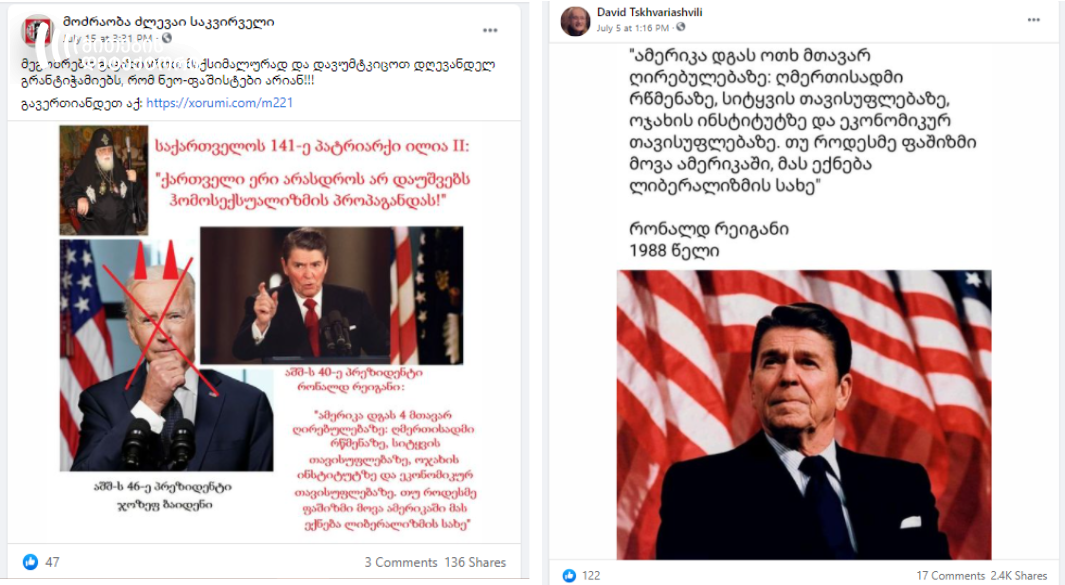 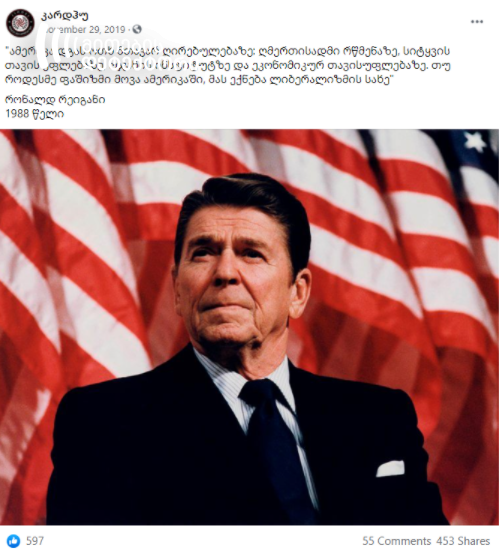 The circulated photo collage is manipulative. Reagan’s quote is fabricated and consists of the artificially created mix of Reagan’s statements made in different contexts. The quote of Reagan about liberalism concerns his economic points of view and not the values of family and faith. Not to mention, Reagan made the statement in 1975 and not in 1988.

The video shared by Modzraoba Dzlevai Sakvirveli unites the statements of Reagan from two different speeches. In the first part, Reagan talks about the four fundamental values of the American nation: Faith in God, Freedom of Speech, Family and Economic Freedom, while the second part concerns Fascism and Liberalism. Nonetheless, the quotes do not share the same context. The photo collage is also manipulative, as it ascribes the same context to the quotes of Reagan and Ilia II.

Reagan’s quote originates from the 1975 TV-Show “60 Minutes,” where he indeed spoke about liberalism, nonetheless, in connection to his economic points of view and not the fundamental values or LGBTQ rights. The video published on YouTube clarifies that the heart of Reagan’s philosophy is libertarianism, claiming:

“You know, someone very profoundly once said many years ago that if fascism ever comes to America, it will come in the name of liberalism. And what is fascism? Fascism is private ownership, private enterprise, but total government control and regulation. Well, isn’t this the liberal philosophy? The conservative so-called is the one that says less government, get off my back, get out of my pocket, and let me have more control of my own destiny.”

According to the fact-checking outlet “Snopes,” allegedly, Reagan was trying  to remember the quote of an American writer Sinclair Lewis: “When Fascism comes to America, it will be wrapped in the flag and carrying a cross.” Nonetheless, the 40th President has provided his own version of the quote.

As for the quote regarding the fundamental values of the US, Reagan has made several statements over the years, including the address before a Joint Session of Congress on the State of the Union on January 25th, 1988.

“[A]n America whose divergent but harmonizing communities were a reflection of a deeper community of values: the value of work, of family, of religion, and of the love of freedom that God places in each of us and whose defense He has entrusted in a special way to this nation.”

The Facebook user David Tskhvariashvili has attempted to combine the above-mentioned quotes; however, he claimed that both were from 1988, while in reality, the quote about liberalism and fascism dates back to 1975.

During his speeches and addresses, Regan has been regularly accentuating the fundamental values of the US, nonetheless, not in connection to fascism and liberalism. His statements were not anyhow related to the topic of LGBTQ rights; therefore, using his and the Patriarch’s quotes in the same context is manipulative.

The Spread of the Quotes

Apart from combining the two separate quotes and changing the overall context, some of the concerned pages have also been spreading the Reagans 1975 quote with no contexts at all, giving no evidence that Regan was talking about his economic points of view and was comparing fascism with liberalism for this sole purpose.

The page “Truth” has published the quote in a post of August 30th, 2020, which was later shared by several other pages (“National Television,” “Georgian Family,” “Beka Anjaparidze”). The quote is also published by the page “Ignorance is strength – 1948.” 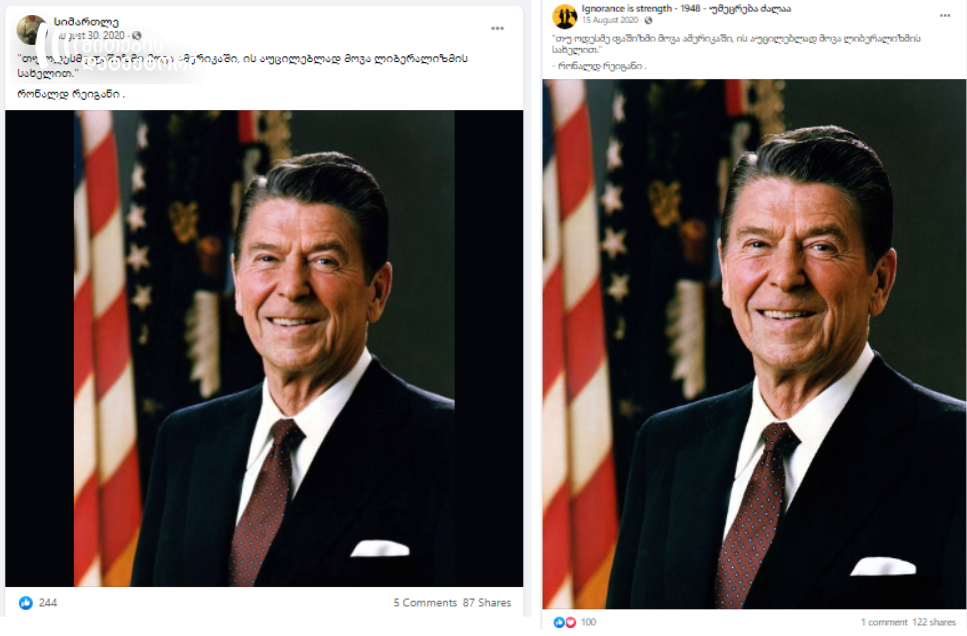