What did Pompeo Actually Say on Russia’s Annexation of Crimea? 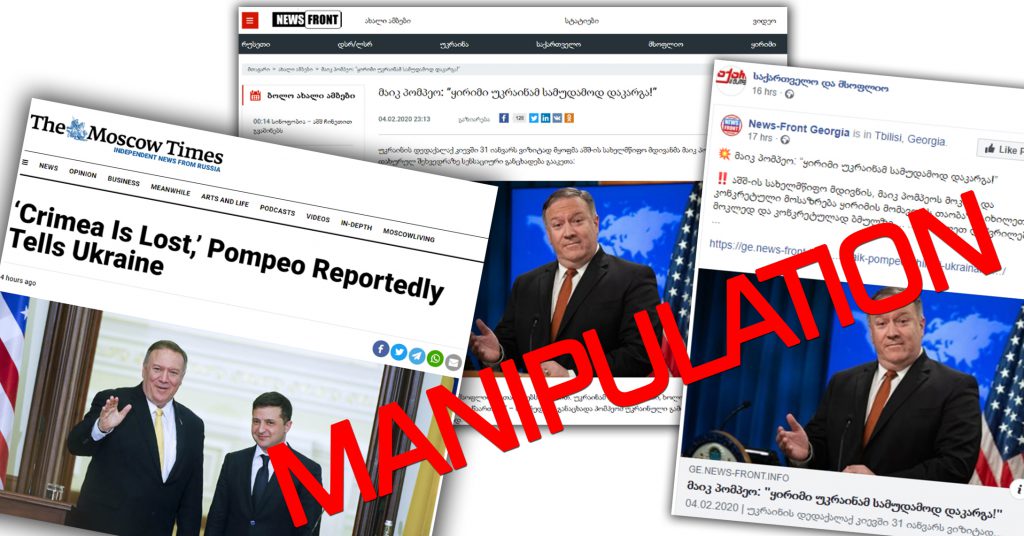 On February 4, pro-Kremlin online edition News Front Georgia released an article headlined “Mike Pompeo: Ukraine has lost Crimea forever!” According to the article, during his visit to Crimea on January 31, U.S. Secretary of State Mike Pompeo allegedly said at a closed-door meeting that Crimea is already lost and that Russia is not a country from which anything can be taken away. News Front Georgia refers to Ukrainian media outlet Новое Время as its source.

News Front: “Crimea is lost. World players understand it. Ukraine has ceded Crimea and Russia is not a country from which anything can be taken away” – this is how Ukraine’s HB quoted Pompeo as saying. Pompeo made this statement during the meeting with Crimean activist Emine Dzhaparova.”

News Front’s article was shared by online edition Georgia and World on February 4 and Facebook page “სტალინი” (Stalin) on February 5. Moreover, on February 4-5, similar articles involving Pompeo’s remarks were released by Russian online newspapers The Moscow Times, rbc.ru, kommersant.ru. “World players understand well that Crimea is lost. Russia is not a country from which anything can be taken away.” These media outlets refer to Новое Время when quoting Mike Pompeo.

Pro-Kremlin media outlets cover the remarks made by the U.S. Secretary of State incompletely and in a manipulative manner. In fact, during his meeting with the civil society, Mike Pompeo discussed the issue of how to keep Crimea on international agenda and said at his meeting with Ukrainian President Volodymyr Zelensky that the United States will never recognize Russia’s attempts to annex Crimea. The primary source, Ukrainian edition Новое Время spread the information mistakenly, but later it updated the report to clarify the issue. Russian online media did not make any corrections to the materials shared from Новое Время.

Who did Mike Pompeo meet during his visit to Kyiv and what did he say about Crimea?

In late January, Mike Pompeo visited Ukraine and held meetings with the Ukrainian President and government members, as well as the National Anti-Corruption Bureau. The Crimean issue was raised during this latter meeting regarding which the Ukrainian media outlet Новое Время wrote that according to Pompeo, “Crimea is lost and world players understand that Crimea is lost, and  that Ukraine has ceded Crimea, whereas Russia is not a country from which anything can be taken away.” The report was immediately picked up by pro-Kremlin media outlets, but later Olena Tregub, Secretary General of the Independent Defense Anti-Corruption Committee, clarified that according to Pompeo, the international community considers Crimea lost and therefore, it is important to keep the Crimean issue on the agenda.

According to Unian, Emine Dzhaparova, a participant in the meeting with U.S. Secretary of State Mike Pompeo in Kyiv, said that the Crimean issue was raised at the meeting and Pompeo’s position on this issue is very clear. Dzhaparova posted on her official Facebook page that “Russian media have “grabbed” the incorrect material of NV on the meeting with Pompeo and keep on stuffing the info space with the front-page headlines of their own desirable “truth”.”

In addition, during his meeting with the Ukraine President on January 31, Mike Pompeo noted that the United States has been “the world’s fiercest defender of Ukrainian sovereignty and territorial integrity.” Pompeo also focused on the Crimea Declaration released in 2018, which clearly stated that Crimea is part of Ukraine and the United States will never recognize Russia’s attempts to annex it.