What Charms the Kremlin’s Sputnik in the Chinese Media?

On July 8, the webpage of the Georgian version of Sputnik published an article titled “Opinion: Why Is the Western Media Losing Positions?”. The article concerns a study carried out by Russia Today, called “Octopus 2.0. Coronavirus in Russia”. The authors of the study believe that the Chinese and the Russian media are far more effective than the Western media and that the latter struggle to compete with them. Irina Alksnis, one of the authors of the study, mentions that the Chinese media have covered the coronavirus-related issues more neutrally than the Western media outlets. Saqinform published an identical article based on Sputnik-Georgia.

Russia and China are on the last places in terms of press freedom in the world. Control of the media and the Internet by the governments, persecuting and oppression of journalists, as well as using the media as a propaganda tool is an accepted practice in both countries. Therefore, showcasing Chinese media as neutral and measuring its efficiency by the number of articles is manipulative. Various studies assess the Chinese and Russian propaganda as bearing threat for democracy.

According to the Reporters Without Borders (RSF), China is on the 177th place from 180 in terms of press freedom. 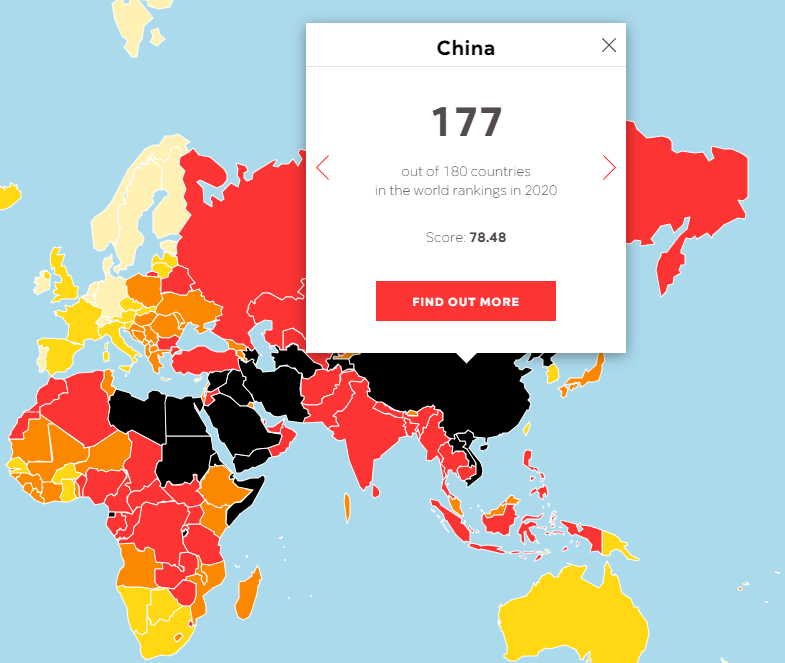 The Chinese media acts under a strict supervision of the government – the Communist Party. Free journalism and reporting are mainly considered a threat to the social stability and the party.

RSF labels the President of China “planet’s leading censor and the captor of press freedom”. According to the organization’s assessment, the Government of China also tries to influence the international media environment.

The Government of China tries to restrict access to the foreign media outlets through banning their broadcast or banning satellites across the country. In addition, webpages of several media outlets, such as the New York Times, Finacial Times, the Wall Street Journal, the Economist, Bloomberg, Reuters, the Washington Post are blocked.

Foreign-based media outlets that broadcast in Chinese, but are not controlled by the Government of China, are banned too.

Certain news webpages, such as BBC, are not blocked, but the articles that go against the rhetoric of the Chinese Communist Party (CCP) are blocked.

Dozens of governmental agencies work on drafting and executing laws related to information dissemination. The Publicity Department of the Communist Party of China (CCPPD) is the most influential censorship body.

In China, media outlets hire monitors on their own who control the political relevance of the materials. Censorship-related instructions are sent by the CCPPD and the State Council Information Office to the leading editors and media outlets on a daily basis.

The Government has hired a vast number of people to control the content published on the Internet. As of 2013, their number was 2 million. Besides the traditional media content, photos and videos created on the Internet with the aim of entertainment are also subject to censorship if they go against the communist ideology. Moreover, the Government blocks the accounts that talk about corruption, healthcare, environmental problems etc.

The Government of China resorted to a shocking measure of Internet censorship in 2010, when a Chinese lawyer Liu Xiaobo was awarded a Nobel prize for his struggle for human rights in China. This news was not broadcasted via Chinese media or Internet portals at all. The broadcast of CNN, which was available only for high-income families and hotels, was banned. Sending messages via mobile phones containing Xiaobo’s name was impossible. The Government of China restricted the phone and internet contacts for Xiaobo’s wife and warned her not to have any contact with media or friends. After she visited her husband in the prison, she was put under house arrest. As the leakage of news on Xiaobo’s award became inevitable, the Government of China labelled the award as “blasphemy”. Xiaobo was sentenced to 11 years in prison on 2009 for democratic reforms and advocacy of freedom of speech.

Prosecution and imprisonment of journalists

According to RSF, more than 100 journalists and bloggers are imprisoned in China and some of the have life-threatening health conditions.

According to data by the Committee to Protect Journalists (CPJ), China is on the first place in the world by the number of imprisoned journalists.

Control over the Internet

Webpages and social network services such as Wikipedia, Facebook, Twitter, YouTube, and Google are banned in China. Moreover, the Government tries to influence the public opinion using hired trolls, known as the 50-cent party, who post comments in favor of the Government.

Media freedom in China deteriorated during the outbreak of COVID-19

In parallel with the spread of the coronavirus, the situation with freedom of speech deteriorated in China, as the censorship became stronger. According to the Amnesty International, any Weibo or WeChat post that mentioned Wuhan or Hubei province, where the first infections of COVID-19 took place, were blocked. In addition, several word combinations that the censorship bodies considered to be a marker of crisis coverage or government criticism were blocked.

The Government of China has deported more than 16 foreign correspondents from the country since the start of 2020.

RSF has criticized the censorship enacted by the Government of China at the initial stage of the COVID-19 outbreak and noted that the worldwide pandemic could have been avoided or mitigated, if the journalists in the country had more freedom.

According to a document published by the European Commission in June 2020, “[Russia and China] have engaged in targeted influence operations and disinformation campaigns around COVID-19 in the EU, its neighbourhood and globally, seeking to undermine democratic debate and exacerbate social polarisation, and improve their own image in the COVID-19 context”.

Using media as a tool for influence

China tries to influence the media environment in Hong-Kong and Taiwan as well. During the anti-government protests in Hong-Kong, police were attacking journalists. Moreover, like Russia, China tries to expand its information influence on other countries as well which in many cases is an attempt to disseminate propaganda.

According to RSF, Russia is on the 149th place out of 180 in terms of press freedom. The organization estimates the index of Russia based on the pressure on independent media and the government propaganda. 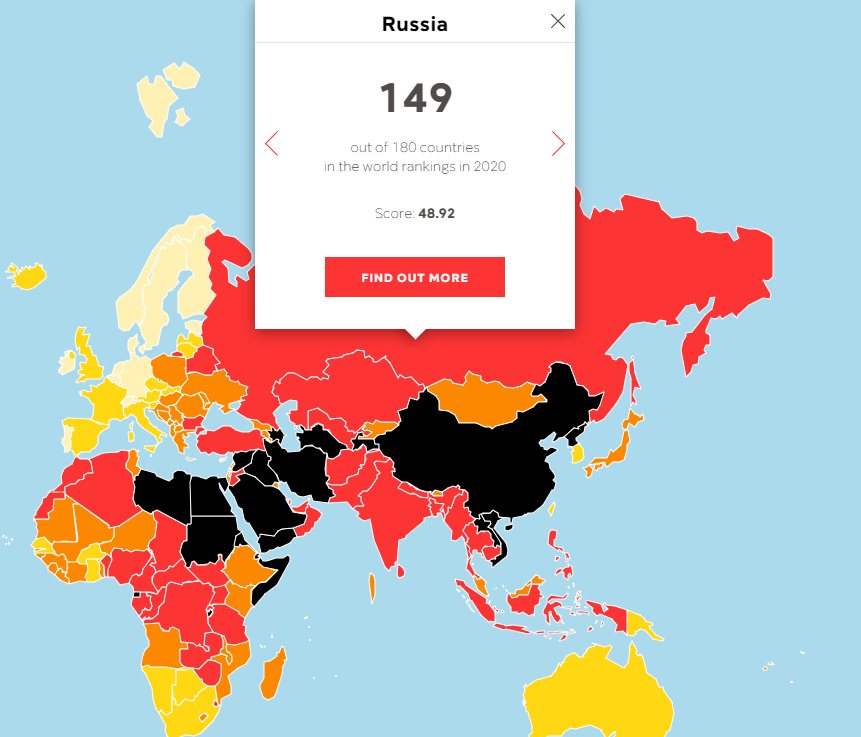 According to BBC, the majority of the national televisions in Russia is owned either directly by the government, or individuals close to the Kremlin. The control over the media outlets was imposed by the government by replacing the owners of these media outlets by the associates of the kremlin or pressuring the editorial boards and journalists. The governmental propaganda became especially strong both in and outside of Russia after the annexation of Crimea. Dmitry Kiselyov, the central figure of the government propaganda who supported the placing of Russian military forces in Ukraine, has even been subject to personal sanctions from the Council of the European Union.

One of the examples of the media content control is the Article 4 of the Law on Mass Media that concerns broadcast of extremist activities by the media.

Control of the foreign-funded media

The December 2019 amendments in the Law on Foreign Agents encompassed media too. The media outlets that received more than 20% of the funding from abroad had to register in the Ministry of Justice. According to the assessment by Freedom House, this is another tool in the hands of the Government of Russia that allows it to tighten control over media.

Control over the Internet

According to the “Sovereign Internet” law, enacted in November 2019, the Government of Russia is allowed to isolate the country from the global Internet. The “Sovereign Internet Law” obliges Internet providers to use devices provided by Roskomnadzor (Federal Service for Supervision of Communications, Information Technology and Mass Media) that allows the state a total control over data.

In addition, the Government of Russia also uses the legislative norms on extremism and mass riots to regulate social media, aiming to silence voices openly critical towards the Kremlin on the social network services.

Persecution and oppression of journalists

Eighty-two journalists have been murdered in Russian since 1992. In 2019 alone, nine journalists were imprisoned.

Read more details on the persecution of journalists and the situation with the freedom of speech in Russia in earlier publications of the Myth Detector:

Coronavirus coverage in the Russian media is disinformative and manipulative

In Russia, the coverage of issues related to the coronavirus pandemic is controlled by the state – something that RSF expressed its concern about. Information published about the coronavirus is subject to the control of Roskomnadzor – a governmental body created with the purpose of controlling the media and is regulated by a law adopted in March 2020. Roskomnadzor forced a local edition, “Говорит Магадан” (“Magadan Speaking”) to delete information. Based on the Law on Disinformation, adopted in March 2020, numerous posts published by Radio Echo of Moscow were deleted on Facebook and a Russian social network service VKontakte. According to a document published by the European Commission in June, during the pandemic, Russia, like China, tries to undermine democratic debate and exacerbate social polarization by spreading disinformation and carrying out influence operations in Europe. According to EU vs Disinfo, there have been more than 500 cases of coronavirus-related Kremlin-connected disinformation. It is noteworthy that the study by Russia Today is not the first attempt by the Kremlin-affiliated media to support the Chinese media. According to EU vs Disinfo, the Kremlin-controlled media actively defends the Chinese government against the coronavirus-related criticism via controlled disinformative narratives in the media and pro-Chinese coverage.