What Caused the Flood in Turkey? 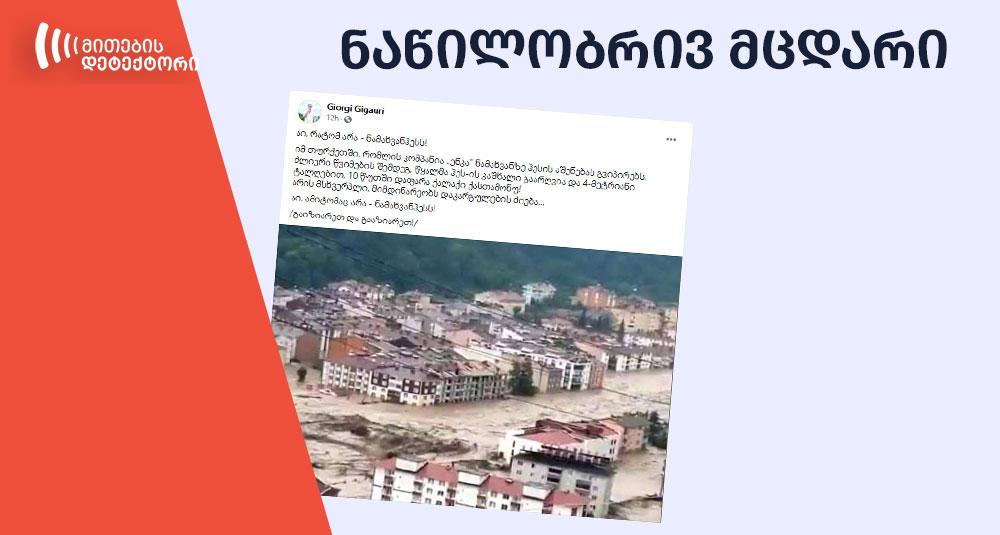 On August 11th, Giorgi Gigauri, the journalist of “Asaval-Dasavali,” published a picture of a flooded town on his personal Facebook page. Gigauri claimed that after heavy rains in Turkey, water had breached the local dam, and the 4-meter waves covered the city of Kastamonu within 10 minutes. The journalist links the event with the construction of the “Namakhvani HPP” and the company “ENKA” and stresses that this is the reason why the HPP should not be built.

As of August 12th, the post of Gigauri has accumulated more than 3000 shares and has been shared to Facebook groups such as: “ლევან ვასაძის მხარდამჭერები” [Supporters of Levan Vasadze], “СТАЛИН ВЕЛИКИЙ УЧИТЕЛЬ სტალინი დიდი მასწავლებელი” [Stalin the Great Teacher], “ქალთა სამყაროს გაუმარჯოს” [Cheers to Women’s World], “სიყვარულით ნაფიქრი” [Thought with Love] and “დედოფალი [Queen]”. The information regarding the demolition of the dam was also shared in the Facebook group “სიახლეები თურქეთიდან და არა მხოლოდ” [News from Turkey and Beyond].

The post of Giorgi Gigauri is partly false. The heavy rain indeed caused the flooding of the Turkish city of Kastamonu; nonetheless, the information regarding the demolition of the dam has been denied by the local authorities. Not to mention, the information regarding the damaged dam cannot be found in the Turkish media. The rain caused the flooding of not only the city of Kastamonu but also the provinces of Bartin, Sinop and Samsun, which are 100km distanced from the Karaçomak Dam.

Heavy rains have caused floods and mudslides in northern Turkey. Apart from Kastamonu, the provinces of Bartin, Sinop, and Samsun have also been affected. The water level has reached 3-4 meters in some parts of the City of Kastamonu. The local officials denied the fact that the flooding was caused by a burst dam.

“We are facing a disaster that we have not seen in 50 or 100 years. We do not have any problems regarding the dam,” said the agriculture and forestry minister of Turkey Bekir Pakdemirli.

The ungrounded information regarding the dam burst was also spread in the Turkish social media; nonetheless, the claim was denied by the Kastamonu Governor’s office.

The Turkish outlet Duvar points out that the heavy rains caused the water level to rise in the dam as well; however, the information about its breach has not been disseminated in the Turkish mainstream media. Kastamonu province amounts to a total of 6 dams. The nearest dam to the city of Kastamonu is the Karaçomak Dam, which is 100 km away from the other provinces affected by the floods.

Rescuing missions are being carried out in the affected regions. According to the latest information, 4 people have lost their lives, while several are still missing. The catastrophe has also caused the collapse of the bridge in Bartin, located 120 kilometres from Kastamonu. Roads and houses have been destroyed. Floods are pretty frequent in the northern provinces of Turkey, especially in summer. Last month, 6 people died due to a flood in Rize, Turkey.

“Namakhvani” is a project to be carried out by the Istanbul-based engineering company “ENKA” in the Imereti and Lechkhumi provinces of Western Georgia. The project entails building two separate HPPs on the Rioni River, aiming to bring 800 million USD in the form of foreign direct investment and enhance energy security of Georgia. The opponents of the project; however, emphasize that seismic risks in the local area are not properly studied, and the project could pose an imminent danger to the entire region.