What Caused the Bruise? Doctors Explain 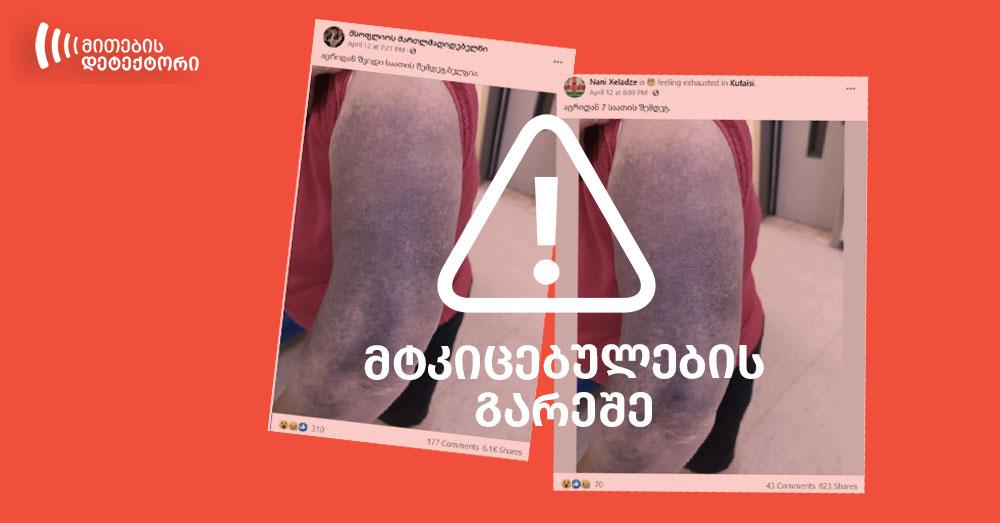 On April 12, a religious Facebook profile „მსოფლიოს მართლმადიდებელნი“ (Orthodox Believers of the World) published a photo showing a bruised arm of a person. The description of the post claims that this photo was taken in Belgium seven hours after a vaccination, but the post does not provide any additional information as to who the vaccinated person is or what kind of vaccine was it.

An identical photo was disseminated on April 12 by a Facebook user Nani Kheladze, who indicate Kutaisi as a location of the photo, creating a false perception that the photo was taken in Kutaisi. 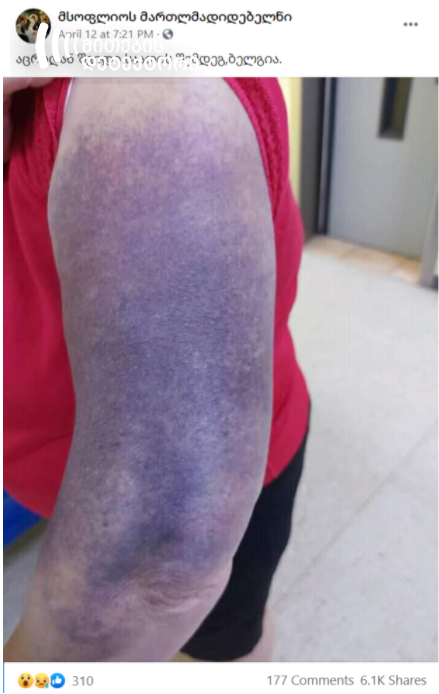 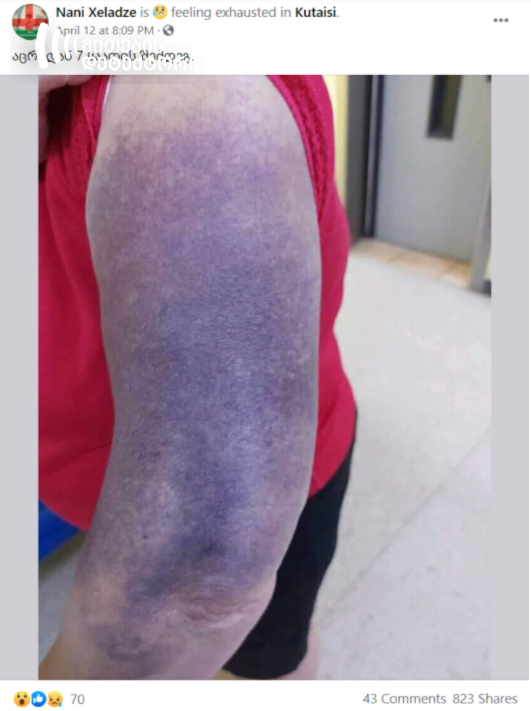 The description of the widely shared photo that the vaccine caused the bruise after seven hours lacks evidence. The photo has an unclear origin and its primary source is an anti-vaccination Facebook user. It is impossible to identify the person on the photo. Myth Detector reached out to an allergist-immunologist Bidzina Kulumbegov and an immunologist at Evex Hospitals, Lali Pirtskhalaishvili. Both of them noted that the bruise on the photo does not seem to be a side effect of the vaccination. Pirtskhalaishvili also explained that it is most likely a traumatic bruise.

The given photo can be found as early as April 9, 2021 via reverse image search on websites informiran.net and mkdpress.site. The first site mostly publishes news about Bulgaria and the world, the other — news about North Macedonia. Moreover, informiran.net indicates that the editorial board does not guarantee trustworthiness of information, as it does not verify information that various sources provided them with. Both sites cite Катя Петрова (Katya Petrova) as the source of information. Petrova, in her April 8 Facebook post, describes the photo as “Mayya Zankova 7 часа · След астра зенека” (Mayya Zankova seven hours after astra zeneca). The post has more than 77 thousand shares. 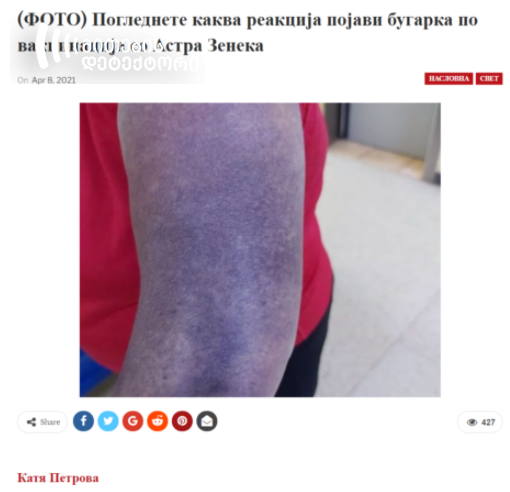 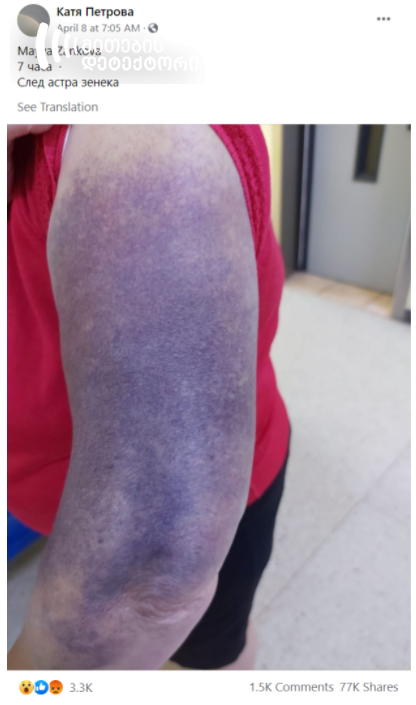 Photos, uploaded by Katya Petrova on Facebook, include conspiracy-related photos too. Mayya Zankova, indicated by Petrova as the source of the photo, cannot be found on Facebook.

The photo went viral on Facebook from Katya Petrova’s profile, while on Twitter it was published by Adriano Mazzola. The description of the photo was similar — the author claimed that the photo was taken seven hours after getting vaccinated with an AstraZeneca vaccine. 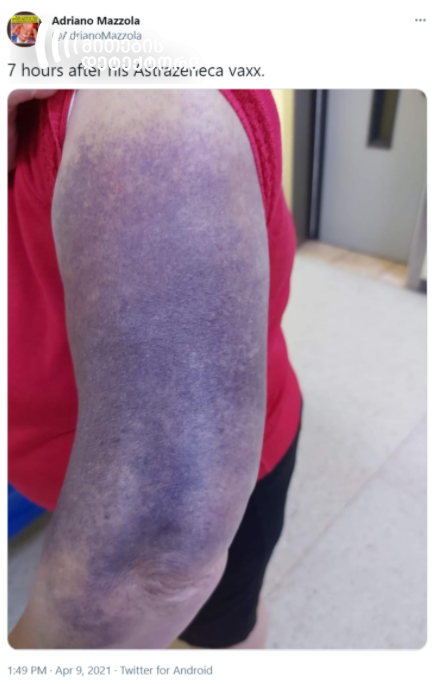 Adriano Mazzola is on Facebook too, where he disseminates anti-vaccination disinformation.. 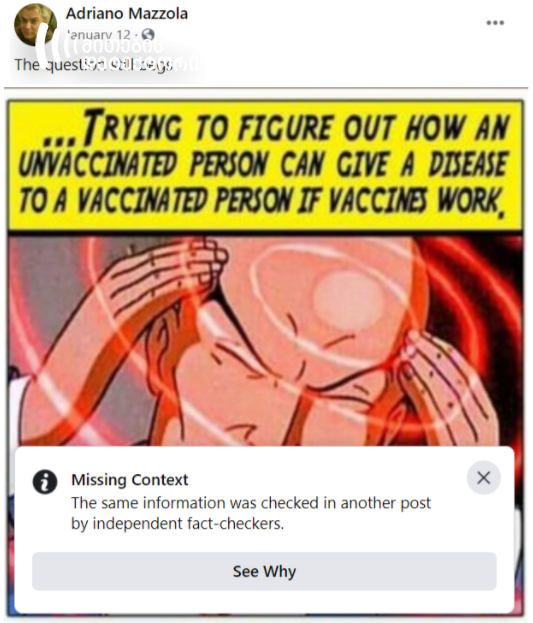 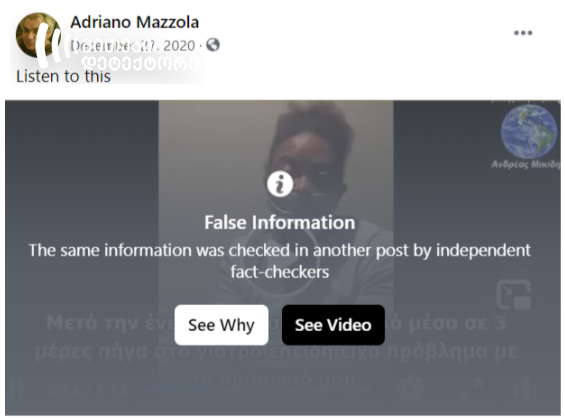 I
t is noteworthy that unlike the Georgian Facebook account Orthodox Believers of the World, Katya Petrova and Adriano Mazzola do not write that the photo is from Belgium. Other Georgian Facebook accounts, such as „ყიდვა გაყიდვა საქართველოში yidva gayidva saqartveloshi“ (trade in Georgia) and a Facebook profile „სამყარო სამყარო“ (Universe universe) published the photo with the description, identical to that by Katya Petrova. 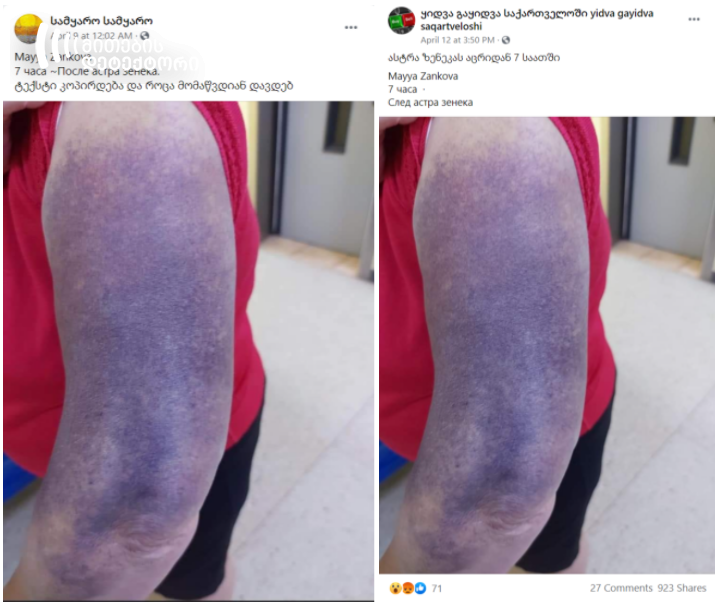 Myth Detector contacted Lali Pirtskhalaishvili — an immunologist at Evex Hospitals — with regards to the photo. She stated that, in general, vaccinations can lead to small bruises, but the bruise on the photo is not local, it is rather spread out. The bruises, caused by vaccinations, only spread in the area around the injection site. Pirtskhalaishvili also noted that the photo likely shows a hemorrhage. As she explained, the bruise is darker around the elbow, possibly indicating that the damage spread from the elbow, not the arm. Moreover, the immunologist also noted that the bruise is superficial and resembles a traumatic bruise.

“Injection is done into muscle mass, in the arm. Therefore, if any side effects could follow, they would spread from the center to the periphery. The bruise, shown on the photo, on the other hand, is darker around the elbow. Therefore, an initial observation is that the bruise does not resemble the one that could spread due to an injection” — says Pirtskhalaishvili.

In his written comment with Myth Detector, allergist-immunologist Bidzina Kulumbegov notes that vaccinations rarely lead to a delayed redness at the injection site, while the said photo does not show a side effect of vaccination.