What are Tomaradze’s Conspiracy Theories about “Corona-Pandemic” Based on? 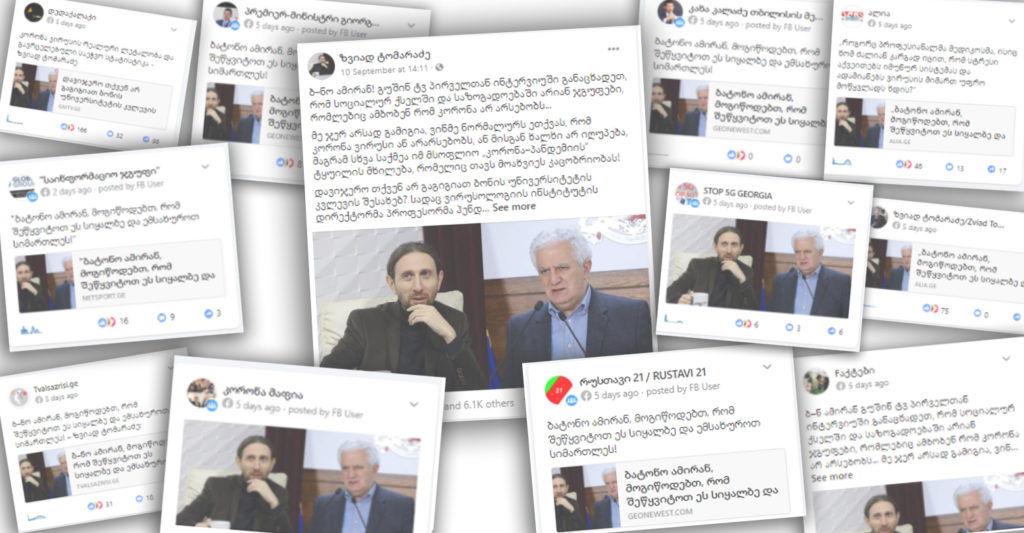 On September 10, 2020, Zviad Tomaradze, head of Demographic Society XXI, published a post on Facebook addressed to Amiran Gamkrelidze, head of the National Center for Disease Control and Public Health. The post reads that the coronavirus pandemic is “a global lie” imposed on the population. Tomaradze claims that official COVID-19 death rates have been falsified and the World Health Organization (WHO) exaggerates the virus fatality rates and threats. 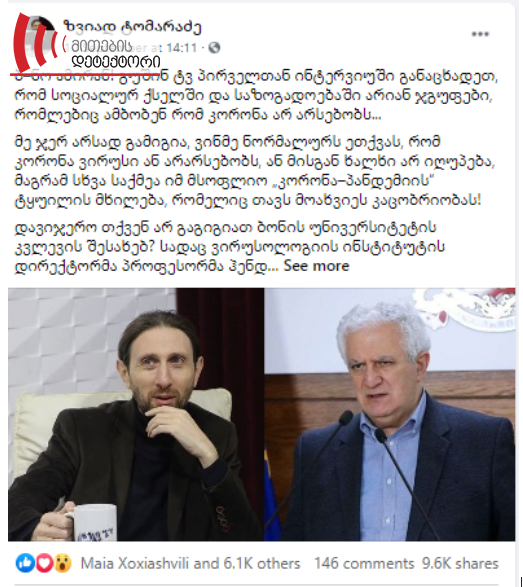 To prove that “corona-pandemic” is unreal, Zviad Tomaradze provides six pieces of evidence. He claims that:

Thus, among Tomaradze’s statements, 1) it is disinformation that Italy’s COVID-19 death rates are increased artificially; 2) Remarks by Rashid Buttar, physician from North Carolina, and Robert F Kennedy, anti-vaccine activist, are conspiracy theories; 3) Reports about the study conducted at the University of Bonn, as well as the “antibody test” by Stanford Medicine scientist, John Ioannidis, which was strongly criticized by scientists due to invalid evidence, represent half-truth/manipulation; 4) The statement allegedly made by Prof. Klaus Püschel, according to which only patients with cancer or lung problems are vulnerable to COVID-19 infection, cannot be searched and therefore, cannot be proved.

1. It is disinformation that Italy’s COVID-19 death rates are increased artificially

In his post, Zviad Tomaradze recollects a scandalous speech by Italian politician, Vittorio Sgarbi in the Italian Parliament on April 25. The member of Forza Italia party said that 96% of 24,075 deaths (as of April 25) were actually caused by other diseases and only 925 people died from the coronavirus.

Sgarbi’s statement triggered strong outcry in Italian media. Vittorio Sgarbi refers to the report from the Higher Institute of Health, which was published on April 20. The report, however, does not say that 96% died of other diseases, but rather notes that patients had also suffered from at least one pre-existing condition. It does not mean that the virus did not cause their death.

Physician Rashid Buttar. Rashid Buttar is an American conspiracy theorist, anti-vaccine proponent, and an osteopathic physician. He is known for his controversial use of chelation therapy for numerous conditions, including autism and cancer. He was reprimanded by the North Carolina Board of Medical Examiners in 2010 for illegal marketing of unapproved drugs to treat children with autism. The U.S. Food and Drug Administration (FDA) accused Buttar of illegal marketing of unapproved drugs.

Amid the COVID-19 outbreak, Rashid Buttar was spreading various conspiracy theories related to the coronavirus. A series of videos featuring Buttar were posted to YouTube. He advanced a conspiracy theory accusing Anthony Fauci, director of the U.S. National Institute of Allergy and Infectious Diseases, and Bill Gates, American business magnate and software developer, of artificially creating the coronavirus. YouTube removed the video a week after it was posted, saying it contained disinformation.

Rashid Buttar’s conspiracy theory about Anthony Fauci and Bill Gates was also spread by Georgian clickbait websites. Detailed information on the issue is provided in Myth Detector’s article –  Are Fauci and Gates About to Get Arrested due to Vaccinations?

Robert F Kennedy. On August 29, 2020, thousands of protesters took to the streets in Berlin to express protest against the coronavirus restrictions. Addressing the protesters, Robert F. Kennedy, a famous anti-vaccine activist, once again voiced conspiracy theories about COVID-19 and linked the coronavirus to 5G phone networks and a threat of totalitarianism.

During the coronavirus pandemic, Robert F Kennedy was constantly promoting various conspiracy theories about the coronavirus, including conspiracy theories about the links between COVID-19, Bill Gates and 5G technology. It prompted a number of fact-checking platforms, including PolitFact, to focus their attention on him. According to PolitFact, Robert F Kennedy is among the biggest sources of anti-vaccine advertisements on Facebook.

3. Half-truth: The results of the study conducted at the University of Bonn do not counter the statistical data of the World Health Organization

A research team led by Prof. Dr. Hendrik Streeck and Prof. Dr. Gunther Hartmann from the University of Bonn carried out a large study to precisely determine the infection fatality rate (IFR) and published its results in early May 2020. A total of 919 patients were tested in the district of Heinsberg, a hot spot for the novel coronavirus, and it was the first such study to determine the infection fatality rate. The study found out that the coronavirus IFR is 0.37 percent. However, it is irrelevant to compare this figure to 3.4% named in Tomaradze’s post, because both figures reflect different statistical data.

During the March 3, 2020 media briefing, the World Health Organization noted that the coronavirus fatality rate was 3.4%. Case fatality rate (CFR) shows how many infected patients have died. In total, as of March 3, 2020, globally, about 3.4% of reported COVID-19 cases have died. Infection fatality rate (IFR), which estimates the proportion of deaths among all infected individuals, was still unknown to epidemiologists in March. It is supposed that IFR calculation needs longer and more detailed surveillance compared to CFR. When the World Health Organization stated in March that the coronavirus fatality rate was 3.4%, there were no data about infection fatality rate. Just the study conducted at the University of Bonn was the first to have calculated IFR.

Further, CFR and IFR are not statistical data and they can change in a long-term period of surveillance. As of August 4, 2020, IFR is converging at approximately 0.5 – 1% and it is influenced by age, sex and underlying comorbidities.

As for accusing Prof. Dr. Hendrik Streeck of falsifying the WHO statistics, it is unknown based on which particular statement Tomaradze claims it.

The study mentioned by Zviad Tomaradze was released by a group of three scientists from Stanford on April 10, 2020. Working around the clock for two weeks, the scientists tested patients to detect antibodies against the novel coronavirus in Santa Clara. They claimed that the very first death cases were revealed in the United States back in February, months before the first coronavirus case was officially confirmed, and that there are much many COVID-19 patients in the United States than officially recorded. Just based on these results, one of the scientists, John Ioannidis claims that coronavirus death rate is very low, the virus is not a fatal threat and strict quarantine measures are not needed to fight against it.

The Stanford study was strongly criticized by experts immediately upon its publication due to its sampling methods and inaccurate data analysis. Expert criticism concerned statistical data analysis – the estimate comes from a first-in-the-nation community study of newly available antibody tests of 3,300 Santa Clara County residents in early April. 50 of them tested positive for antibodies and these results were generalized to the entire American population. Moreover, an antibody test used in the study had not been approved by the U.S. Food and Drug Administration (FDA) and came with an acknowledgment that it could record false positives. Thus, academics are critical and skeptical towards the Stanford study.

Parallels drawn by Zviad Tomaradze between the coronavirus and seasonal influenza death rates are irrelevant, because unlike seasonal influenza, COVID-19 is a new virus and its statistical data are changing rapidly. Unlike seasonal influenza, the vast majority of people do not yet have immunity to it and a vaccine may be many months away. Doctors and scientists are working to estimate the mortality rate of COVID-19, but at present, it is thought to be substantially higher (possibly 10 times or more) than that of most strains of the flu.

4. No evidence: The statement allegedly made by Prof. Klaus Püschel, according to which only patients with cancer or lung problems are vulnerable to COVID-19 infection, cannot be searched.

The quote by forensic doctor Klaus Püschel went viral on social media on April 6, 2020. According to the quote, “all of the deceased previously suffered from serious internal diseases such as cancer or severe lung disease” and “a healthy person has never died of Sars-Cov-2.” The remarks were later shared by thousands of Internet users with various interpretations.

Shortly after the post went viral, it was verified by CORRECTIV, a German nonprofit investigative journalism newsroom, which said that they could not find any statement or interview with Klaus Püschel, where he would say that “a healthy person has never died of Sars-Cov-2.” In fact, the viral post represented a manipulation with Püschel’s statement concerning the Hamburg study, according to which all of the coronavirus-infected patients examined in Hamburg suffered from previously existing serious internal diseases related to heart or lungs. Neither the Hamburg Medical Institute, nor Prof. Püschel confirmed to CORRECTIV the authenticity of the quote manipulatively covered by the post.

Zviad Tomaradze’s post apparently provides manipulative interpretation of Prof. Püschel’s Hamburg study. An opinion was circulating widely at the beginning of the pandemic that the coronavirus was deadly only for elderly people or people with certain underlying medical conditions. However, the coronavirus statistics, including the facts of occupational infections among health care workers, confirm that not only risk groups, but young and healthy patients can also be vulnerable to the coronavirus.