Were CSOs Reacting to Human Rights Violations Before 2012? 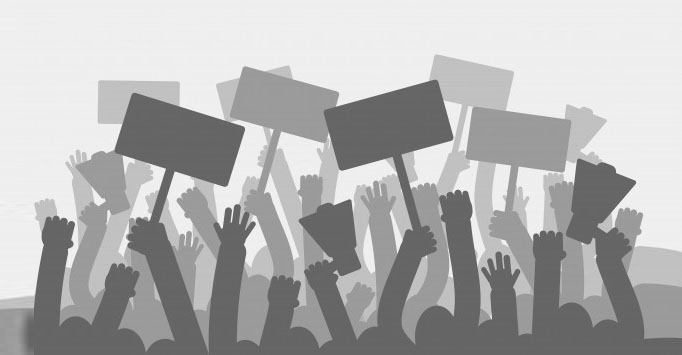 cOn June 26, 2020, Irakli Jankarashvili, a writer for online editions, News Front Georgia and tralsazrisi.ge, as well as an admin of Facebook page Antiliberal Doctrine, published a post, responding to the joint statement released by local civil society organizations on possible election of Sopio Kiladze, chair of the Parliament’s Human Rights Committee, as a member to the United Nations Committee on the Rights of the Child. A group of 52 civil society organizations opposed Kiladze’s nomination by the government, calling on the UN Committee not to support her election to this position, because during her tenure as the Committee Chair, she has allegedly demonstrated homophobic attitudes and selectiveness in supporting human rights, especially the rights of minority groups. The CSOs also noted that the state ignored the UN recommended selection procedures when selecting Kiladze’s nominee. In response to the CSO appeal, Jankarashvili published the post targeting Georgian civil society organizations and particularly, Director of Transparency International Georgia, Eka Gigauri. He claimed that CSOs were not reacting to the cases of human rights violations under the previous government. The post was spread by travsazrisi.ge, Facebook page Antiliberal Doctrine and Jankarashvili’s blog Politiko.

Irakli Jankarashvili: “None of 50 civil society organizations had expressed any concern over human rights violations during nine years. They were looking silently at how Saakashvili’s regime was persecuting peaceful protesters, how they were detaining journalists and raiding media outlets. Ask Ms. Captain whether anybody was protecting human rights during her tenure at the Interior Ministry, or whether she was allowing non-governmental organizations to make such statements. 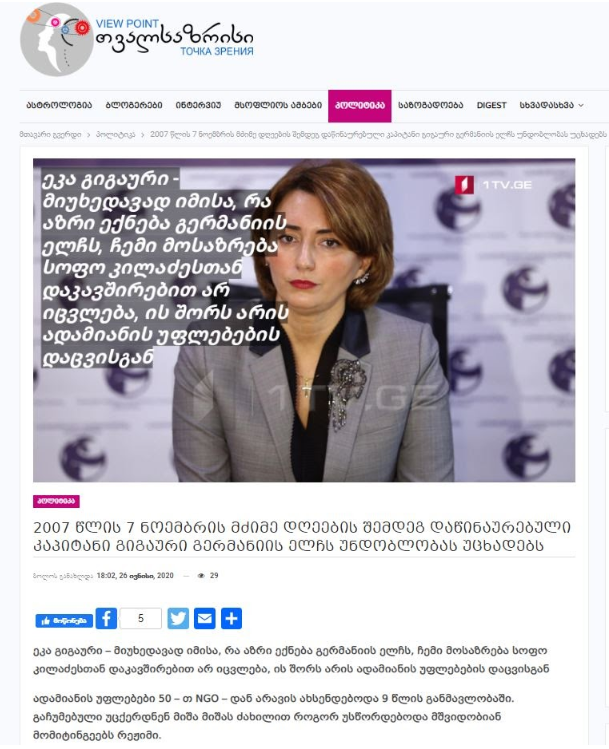 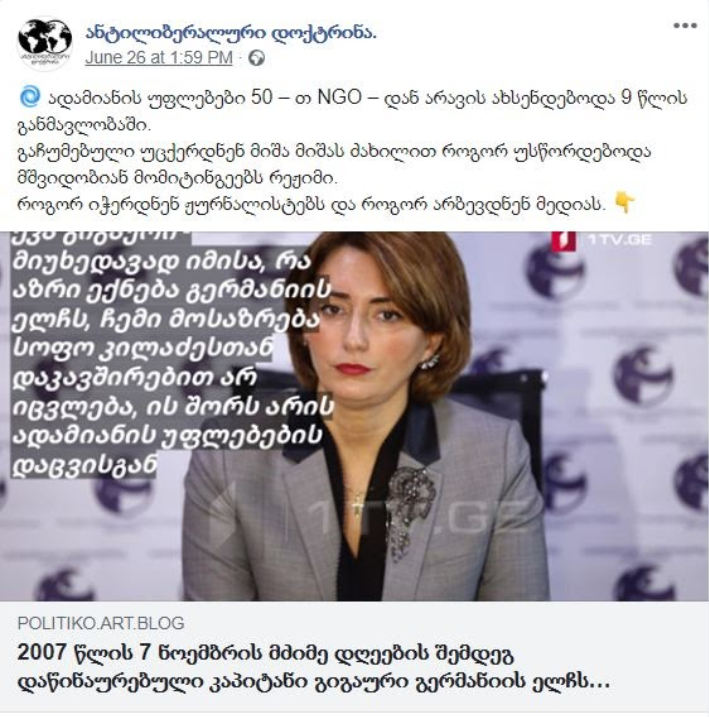 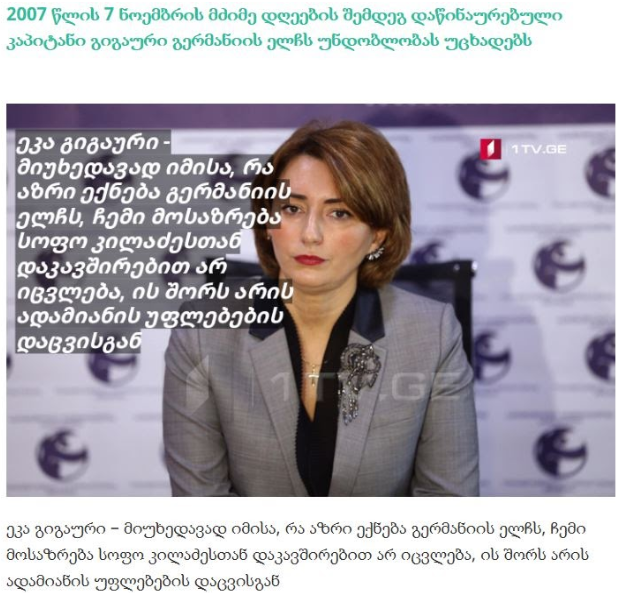 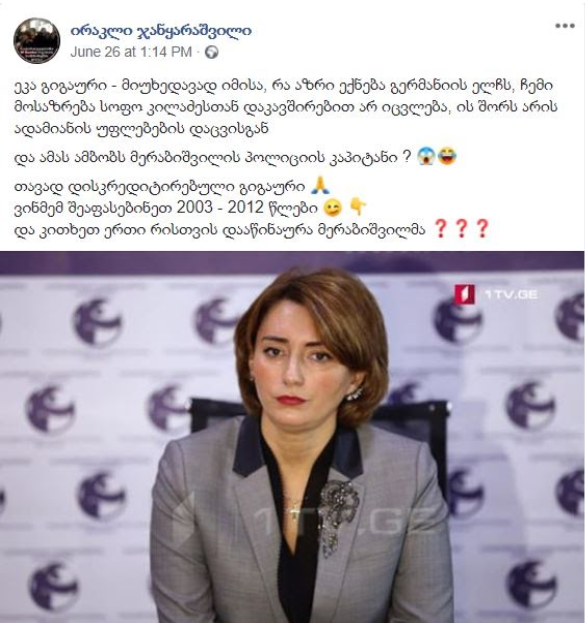 Irakli Jankarashvili spreads disinformation as if civil society organizations operating in Georgia were not reacting to human rights violations when the United National Movement was in power. The Myth Detector offers a brief overview of what activities were carried out by civil society organizations before the change of government in terms of protecting the fundamental rights that aimed at protecting equal election environment, as well as media pluralism and other rights.

“This Affects You Too” and Must Carry

This Affects You Too campaign was launched by a group of non-governmental and media organizations in February 2012. Its initial goal was to change the election legislation through active citizen participation as well as to promote the establishment of competitive pre-election environment that would be acceptable for voters. In March 2012, the campaign set a new goal to fight against covert surveillance and wiretapping.

Due to the concentration of media outlets in the hands of government-affiliated individuals, This Affects You Too, an umbrella group of election watchdog and media organizations, submitted a proposal to the Parliament of Georgia on making amendments to the election legislation ahead of the October 2012 parliamentary elections. One of the amendments envisaged the introduction of must-carry rules, which after the approval would have obligated cable operators to transmit all TV channels with news and political programming. The local civil society organizations believed that the new rules would have promoted media pluralism during the pre-election period, because the pro-opposition TV channels were not providing nationwide coverage.

Open Society Georgia Foundation: “’Must Carry’ and ‘Must Offer’ principles are of vital importance for media pluralism and their enactment has made an important contribution to ensuring equal access to diverse information during the pre-election period. Public opinion polls confirm the importance of these principles and the willingness of the society to have access to different TV channels in the future as well.”

Transparency International Georgia has long been monitoring the concentration of media ownership in the hands of government, as well as unequal environment.

Georgian civil society organizations were actively protecting and advocating for human rights in both local and international courts under the rule of the United National Movement. Frequently, just CSOs were protecting Georgian citizens’ rights in the European Court of Human Rights.

Another local non-governmental organization “Article 42 of the Constitution” was also involved in the issues of human rights protection. With the financial support of Open Society Georgia Foundation, from 2010 to 2013, the organization implemented the project “Strategic Litigation for Vulnerable and Marginalized Population.” Within the framework of the project, the organization won seven cases in Strasbourg and tens of cases – at a local level. The cases initiated by Article 42 of the Constitution involved the facts of protection of inmate rights, violation of the right to fair trial and so on. Detailed information about dispute settlement proceedings carried out by the organization is provided at the following link.

Protection of human rights in the penitentiary facilities

Since 2013, Open Society Georgia Foundation (OSGF), in partnership with ten other civil society organizations, had been studying the facts of torture and inhuman treatment of inmates in the penitentiary facilities as a systemic crime. In addition, the organization had been closely following the investigation launched after the videos showing torture and degrading treatment of inmates were spread on September 18, 2012.

The Human Rights Center was especially critical towards the facts of violation of inmate rights. The organization thoroughly analyzed the situation existing in prisons in 2009-2010, as well as the issue of political prisoners.

2Dispersal of the November 7, 2007 rally and raiding Imedi TV by police triggered strong criticism by civil society organizations. Later, all those developments were reflected in international reports:

21 December 2007, Human Rights Center’s report: “[In November 2007] the Government of Georgia, by dispersing the demonstrators with use of excessive force, by taking two TV stations, Imedi TV and Kavkasia, off the air and destroying the property of Imedi TV after forcefully raiding its office, has violated several fundamental rights guaranteed by the Georgian Constitution and international treaties that Georgia has ratified. These rights include: the right to freedom of expression; the right to freedom of assembly and association and the right to property.”

7 November 2009, Georgian Young Lawyers Association: “It has been two years since the tragic developments of November 7, 2007, when law enforcement officers unlawfully used excessive force to disperse peaceful protesters, raided independent television and destroyed its equipment, used special means that were illegal at the given time; as a result at least 500 people were injured. Although authorities have formally acknowledged that the November 7 lessons were learned, the developments have not been thoroughly investigated; those who gave orders and those who executed these orders have not been identified.”

During the pre-election period, local election watchdogs were monitoring the cases related to violations of electoral procedures and use of administrative resources in favor of the ruling party. Simultaneously, they were challenging the facts of violations in court.

See detailed information about Irakli Jankarashvili as well as the activities of pages and groups associated with him in Myth Detector’s earlier publication.