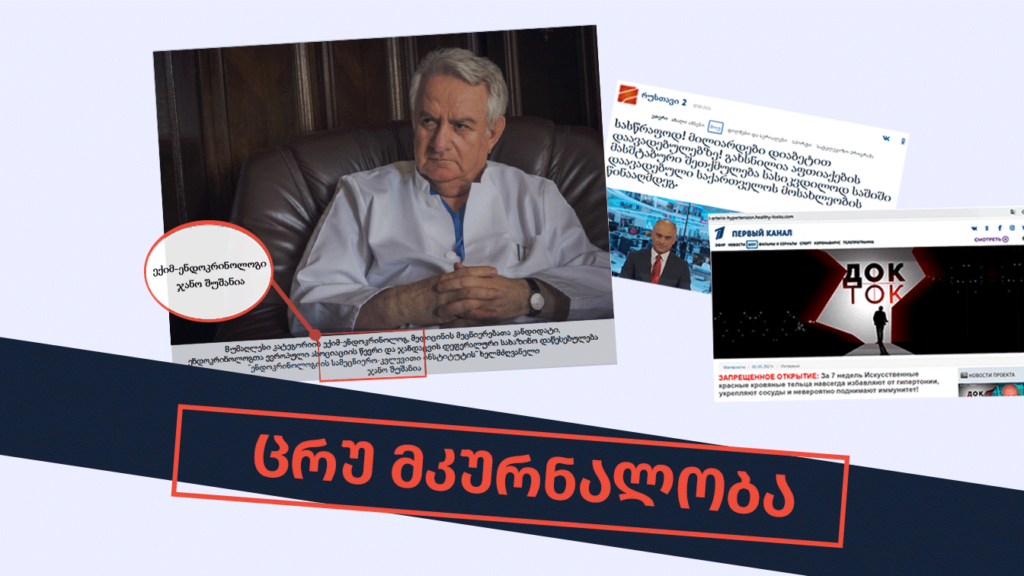 On May 9, Facebook page Alocubanoguayaberas shared an article published on nera.ru.com. The purpose of the article is to sell Dialux, a diabetes treatment drug. 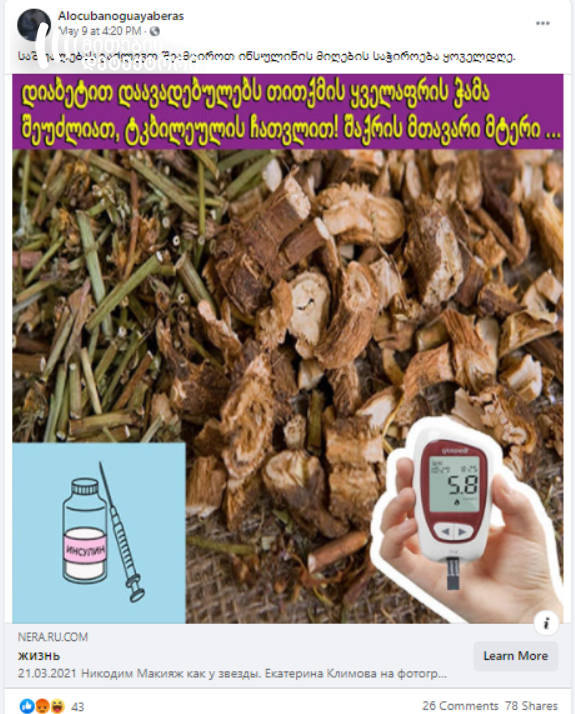 According to the article, the developed countries have already created a diabetes treatment drug and it can be cured within 14-20 days as easily as a cold. The article offers an interview with “doctor Jano Shushania,” who claims that interested persons can buy a diabetes treatment drug in Georgia, which is more effective than its European analogue, adding that pharmacies refused to sell this medicine. The website also offers its readers a raffle through which all interested persons can buy Dialux at a reduced price – GEL 64.

The man depicted in the photo used by nera.ru.com who was passed off as endocrinologist Jano Shushania is Pridon Todua, Doctor of Medical Science, who died in 2017. Moreover, the website manipulatively uses the Rustavi 2 TV logo as well as the photo depicting the anchors of Mtavari Arkhi TV that may mislead the readers.

The website nera.ru.com, like ueik.ru.com, which is currently deleted, is trying to sell Dialux to treat diabetes and contains the signs of medical fraud.

Instead of the online edition’s name and logo, nera.ru.com contains the logo of Rustavi 2 TV. Moreover, the article is accompanied by a photo of Mtavari Arkhi TV anchors, Paata Iakobashvili and Diana Jojua to leave an impression that the article is reliable, as well as to mislead the readers. 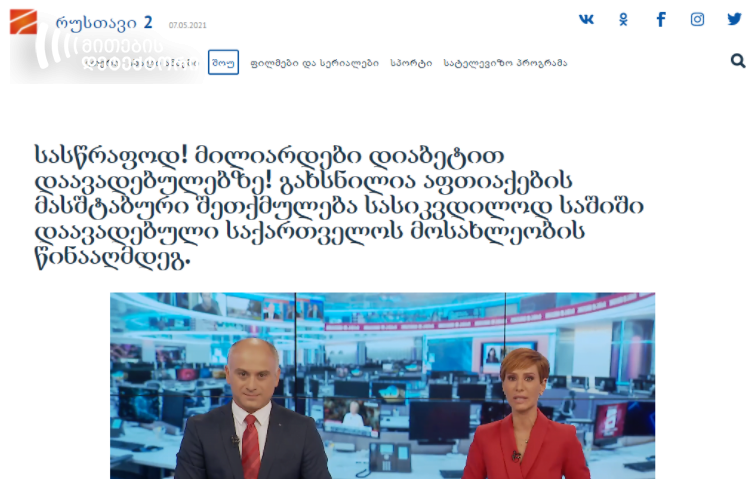 Russian websites identical to nara.ru.com have also used the logos of popular media outlets in an attempt to gain readers’ confidence. For example, Russian-language websites, which are trying to sell the drugs to treat varicose veins and hypertension use the logos of Russia’s Channel One and Meduza. 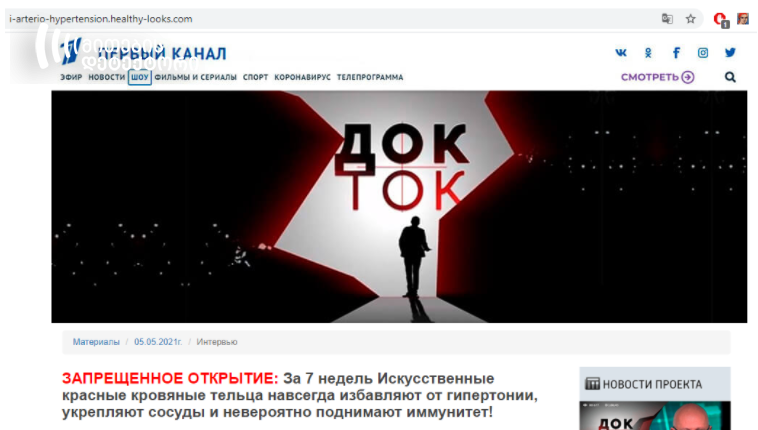 Who is depicted in the photo – Jano Shushania or Pridon Todua?

ueik.ru.com passed off the director of Voronezh Bridge Construction Plant as Georgian endocrinologist, Alexander Burduli, while nera.ru.com uses a new photo depicting an old man in a white medical gown. According to the article, this man is a leading endocrinologist, Jano Shushania. 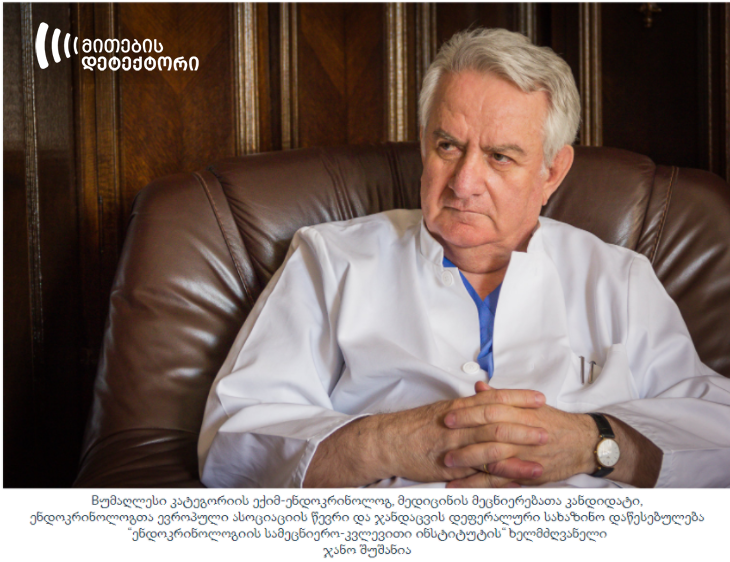 In fact, the man depicted in the photo is not Jano Shushania, but Academician Pridon Todua, Doctor of Medical Science and former Georgian MP (2008-2012) who died in 2017 at the age of 73. It is noteworthy that Pridon Todua has never been an endocrinologist; instead, he worked in the field of radiology. In 1997-2017, he was the President of Georgian Association of Radiologists.

The original photo used in the article is accompanying the interview with Pridon Todua published by Sputnik Georgia in 2016. 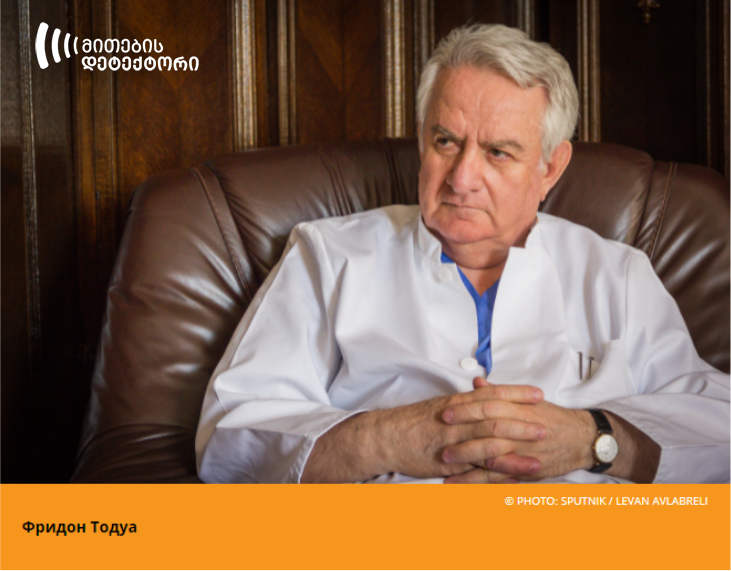 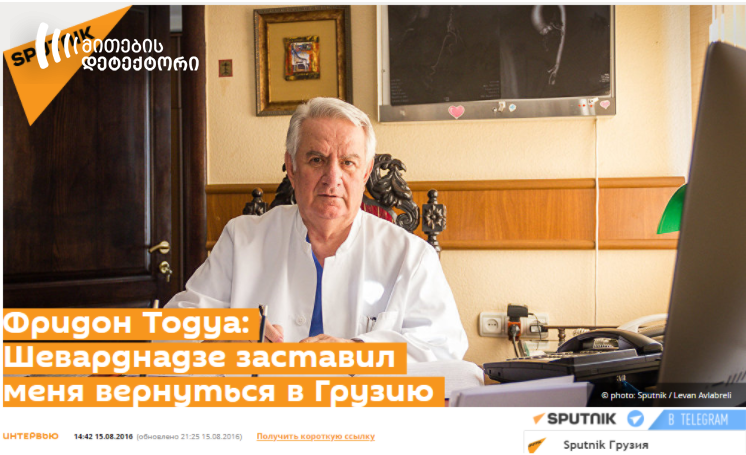 The website has several sections. However, after clicking on any of these sections, we are offered to participate in a raffle and buy Dialux at a reduced price.

The website’s visual side and content is similar to ueik.ru.com, which also tried to sell Dialux through medical fraud. The website was deleted shortly after Myth Detector flagged the article as false. Presently, it is inactive. Apparently, the new website was just created to replace ueik.ru.com. 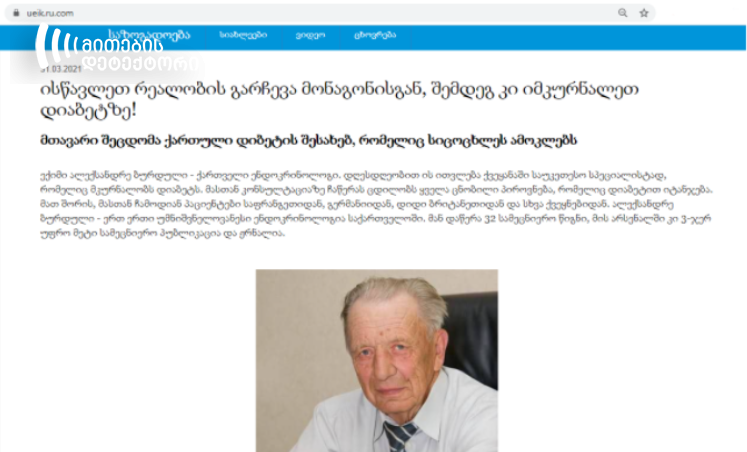 Like ueik.ru.com, according to Whois Lookup, the website nera.ru.com was also registered by reg.ru, while San Francisco is identified as the website’s IP address. 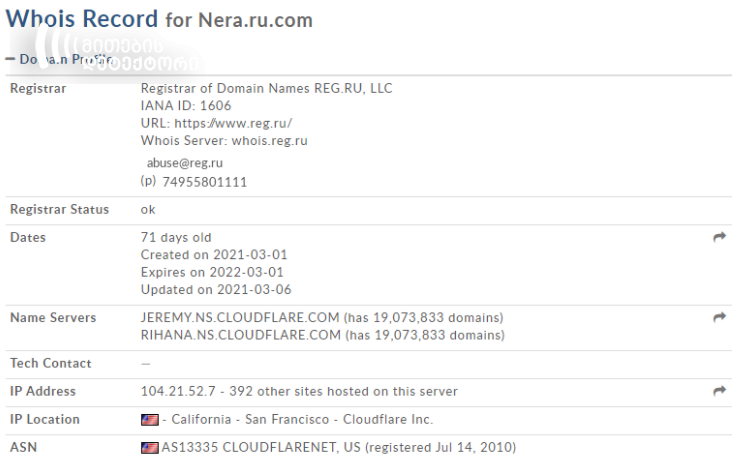 Like in the case of ueik.ru.com, positive comments from consumers have been fabricated, while the same photos of the authors of comments have been used on Russian-language websites created for the same purpose. 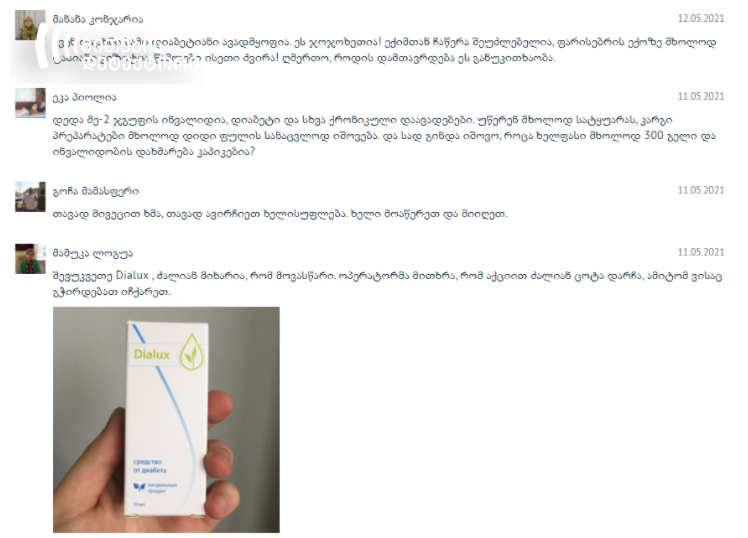 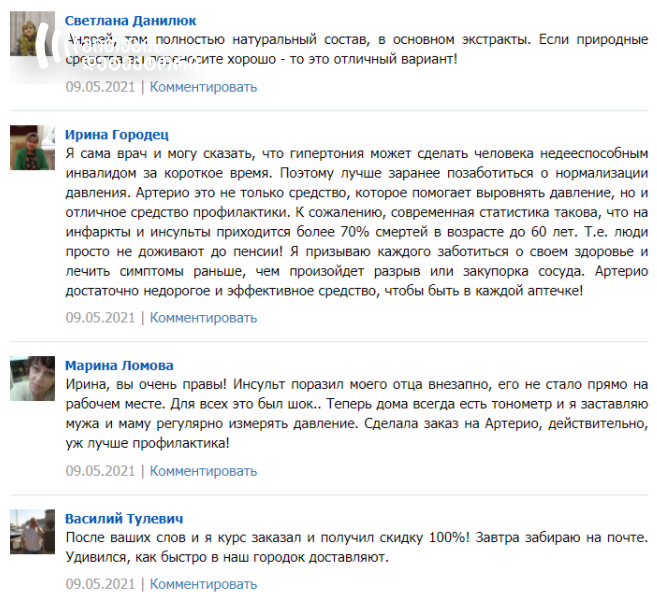 The photo of one of the authors of comments, named Nugzar Varsimea can be searched on dating websites using the name of Felix Karasi. 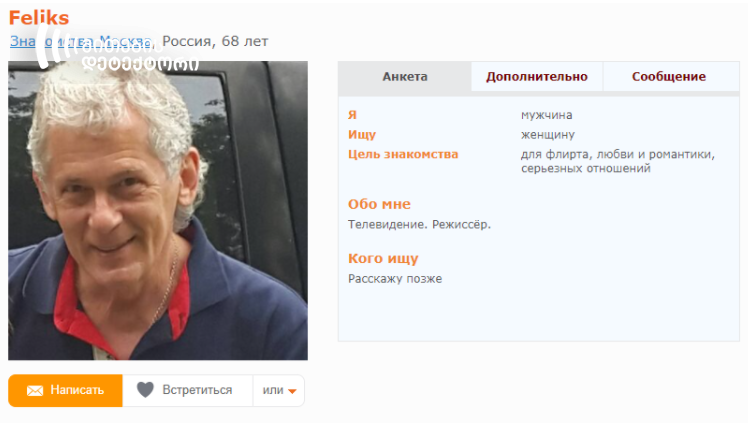 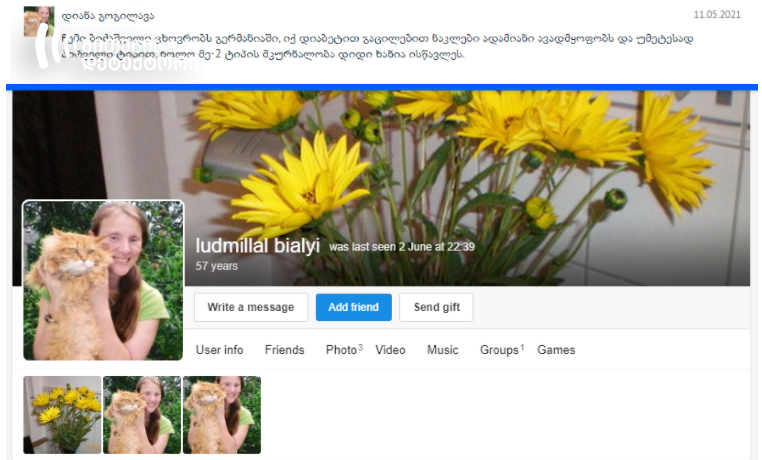 The article published by nara.ru.com was shared by Facebook page Alocubanoguayaberas that is a Portuguese men’s clothing store. The page was created on October 16, 2020.

The page published the post in Georgian. It, however, has no admins in Georgia – the page has two admins in Russia, one admin in Angola and one – in Ukraine. 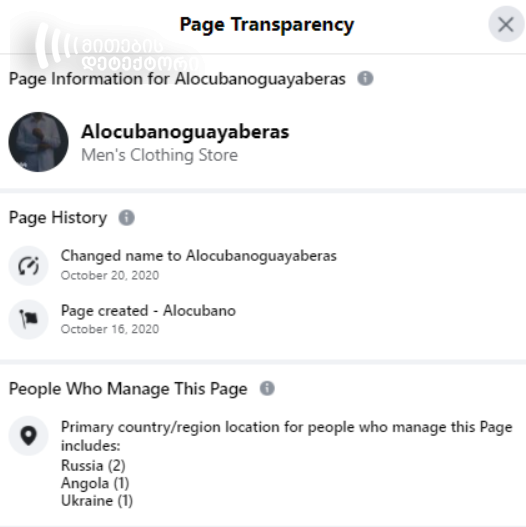 Like the deleted website ueik.ru.com, nara.ru.com also contains the signs of medical fraud. The article does not provide sufficient information about Dialux safety and efficiency. In particular, there is no information about Dialux manufacturer or the country of origin, its ingredients and the company’s contact information. Moreover, neither the article nor any open source provides information about any research that has studied the drug efficacy. It is noteworthy that Dialux offers patients a cure for diabetes. But the medical community agrees that diabetes can be controlled, but no full cure is