Does the Rally with “Night Wolves” and Soviet Flags Express a Protest of the Dresden Population Against Ukrainian Refugees? 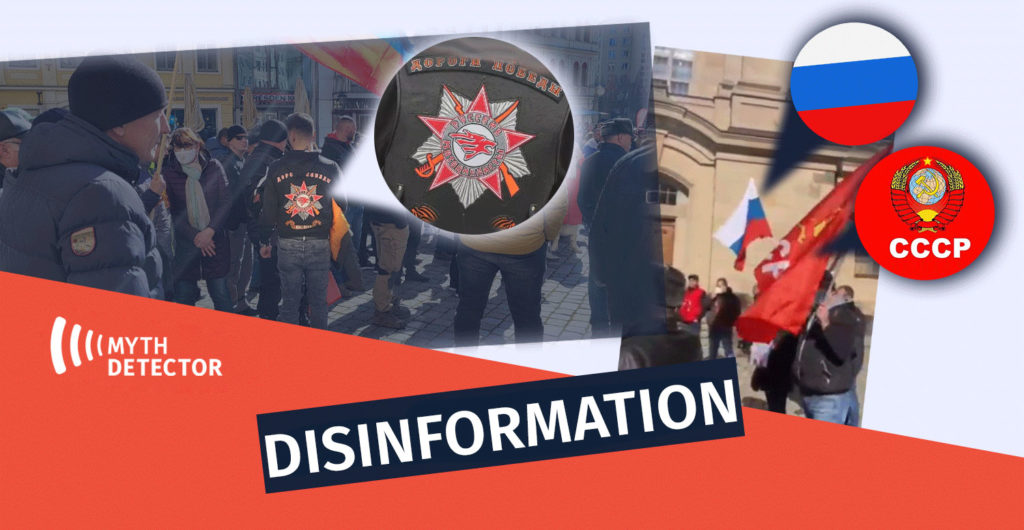 On March 14th, the Facebook page “Moscow_Blacklist-1” published footage of a protest rally in Dresden, Germany. According to the description, the population of Dresden protests the rampant flow of Ukrainians to Europe because “30% of Ukrainians are normal people, while 70% create unrest.” The page also indicates in the description that only two weeks have passed since the launch of the “special operation” by Russia in Ukraine, and these types of protests have already begun. 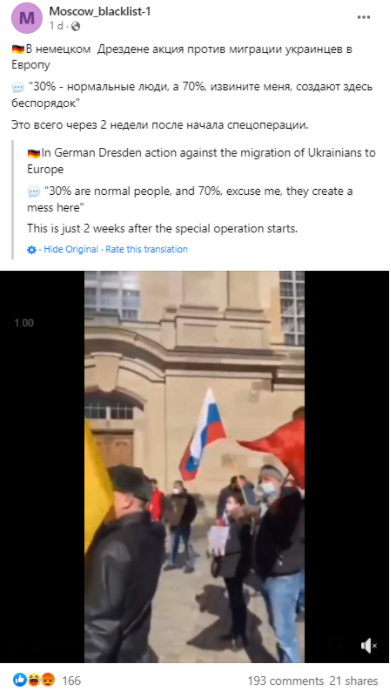 The video is being disseminated with a false description. In fact, a small-scale protest was organized by the Russian-speaking population of Dresden, with several members of the “Night Wolves” club close to Putin arriving in Dresden especially for the day. In fact, rallies in solidarity with the Ukrainian people are being held in German cities, taking various initiatives to help the refugees.

The protest, shown in the aforementioned video, took place in Dresden on March 12th, 2022 and was attended by several dozen Russian-speaking people holding the flags of the Russian Federation and the USSR. The protest was actively covered by German historian and teacher Analena Schmidt living in Dresden. On March 12th, Schmidt tweeted that protesters were gathering in the centre of Dresden with Russian flags. Schmidt also noted that calls and posters with the tactical symbol of the Russian military “Z” were circulating on social media even before the rally. Schmidt also published a poster of one of the organizers of the event, on which the following calls were made in Russian: Friends, all, all, all who care what is happening today in the big cities of Germany. Come out and show that you do not agree with this! Let’s protect our children together!” 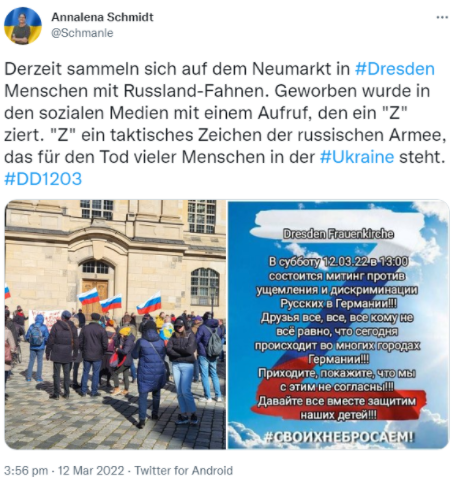 The video published by Moscow_blacklist-1 with a false description was published by NEXTA on March 12th. According to NEXTA, Russians who have settled in Germany are protesting against the reception of Ukrainian refugees in Germany. 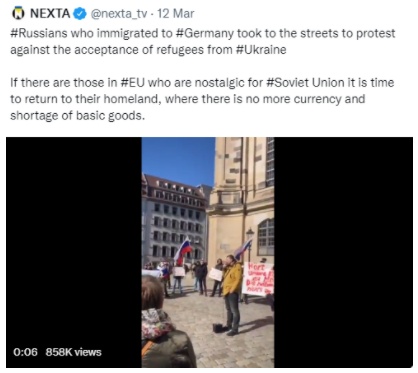 The video shows the flags of Russia, Kazakhstan and the Soviet Union, with the speaker speaking Russian. According to Analena Schmidt, members of the Russian-based International Motorcycle Club “Night Wolves” (Nachtwölfe) also took part in the protest. The disseminated photo shows a man dressed in the symbol of “Night Wolves” and the Ribbon of St. George. 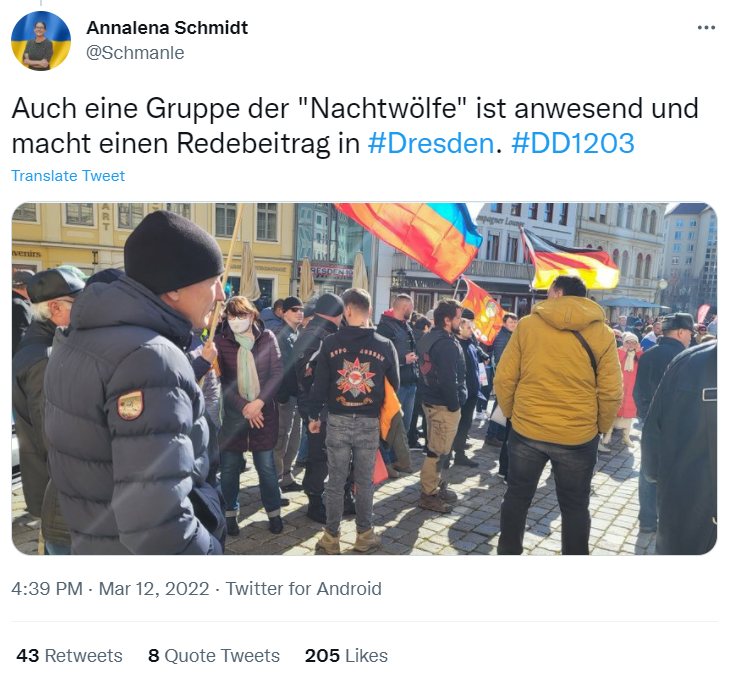 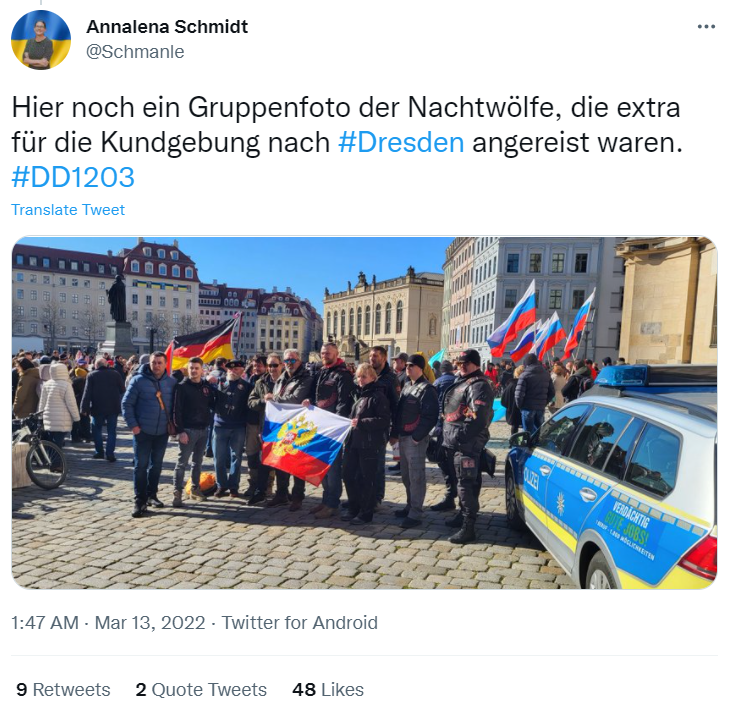 In fact, both the German government and the population support Ukrainian refugees. According to the German Government Commissioner for Integration Rim Alabali-Radovan, Germany will offer all necessary assistance to all people from Ukraine. In addition to the government, people in various German cities are expressing solidarity with the Ukrainian people through thousands of protests. Volunteer groups also meet Ukrainian refugees at stations in Berlin and other cities and offer a variety of assistance. 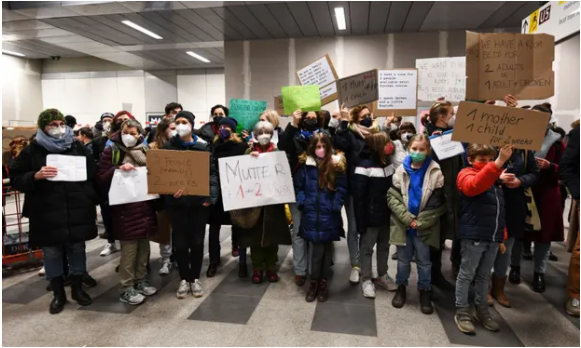 Berliners greeting the Ukrainian refugees at the train station, offering them shelterPhoto:Annegret Hilse/Reuters 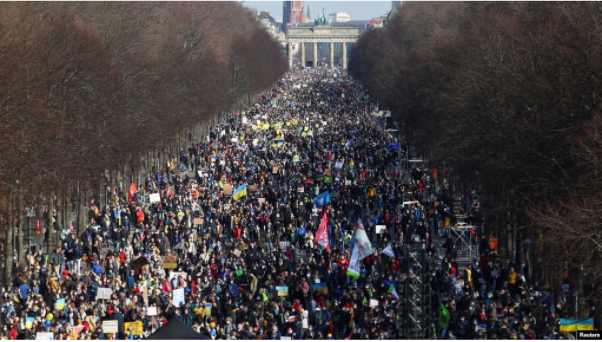 The rally in solidarity with the Ukrainian people and against the war. Berlin, 13.03.22  Photo: ReutersWho are the “Night Wolves?”

The so-called “Night wolves” is a biker club founded in 1989 in the Soviet Union.

In early March, members of a group of bikers known as “Night Wolves” stood in front of the Russian consulate in Bonn, Germany, for several hours. According to local media, the consulate received a threatening message a day before the meeting of the “Night Wolves”. On February 17th, Montenegrin members of the Night Wolves also demanded the cancellation of a pro-Ukrainian rally in Podgorica.

It should be noted that Putin has been personally attending the events of the “Night Wolves” in the last years. The club is considered to be managed by the Russian government. 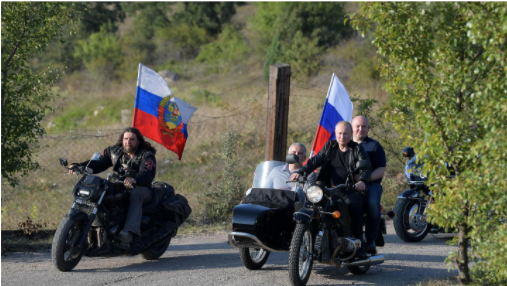 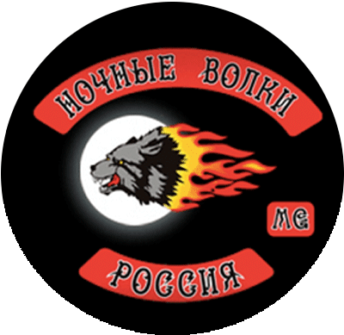