Was the Marmorated Stink Bug Bred at the Tbilisi-Based Lugar Lab? 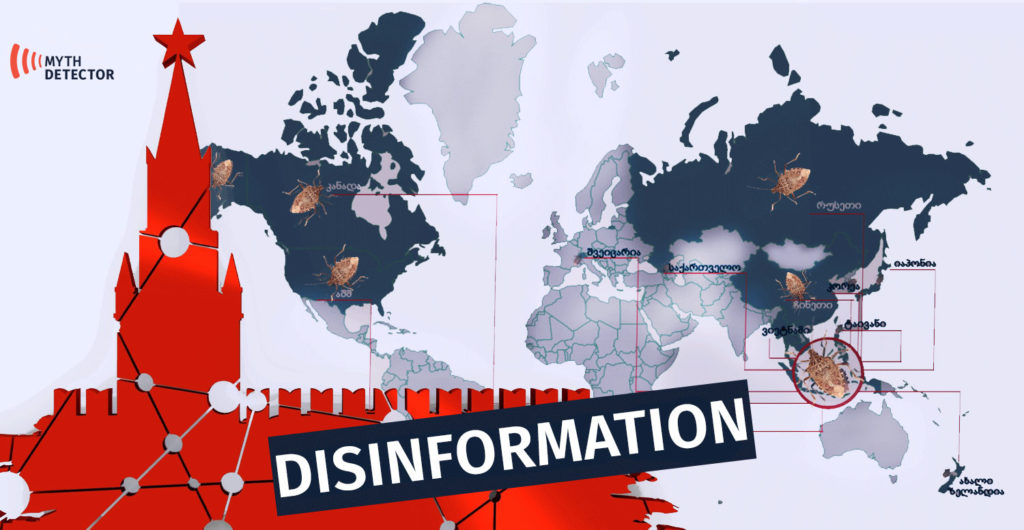 On March 9th, Facebook user Irakli Zakareishvili published a post based on the press service of the Russian Chemical and Radiological Defense Forces, claiming that one of the species of “Marmorated Stink Bug” – Halyomorpha Halys, which has had a devastating impact on the ecosystem and the economy, was created in Lugar Lab of Tbilisi. In addition, Zakareishvili’s post mentions that in 2014, the mass spread of the insect in Abkhazia began from the territory of Georgia, which led to a significant loss of fruit and subtropical crops in 2016. On March 10th, Facebook account “Fantina” published a post with identical content and visuals. Both posts feature an identical text passage in Russian. 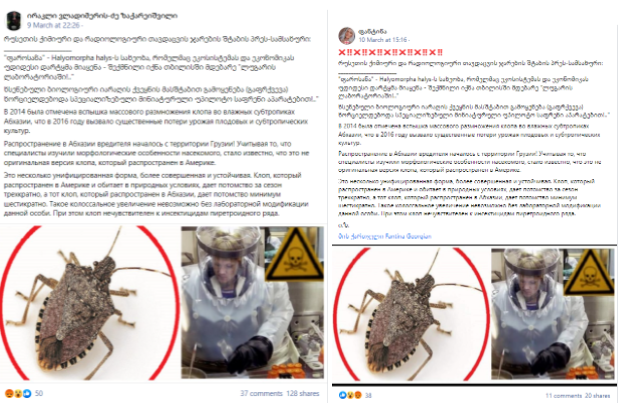 The claim that “Marmorated Stink Bug” was created in the Lugar Lab is disinformation. In fact, the insect (Halyomorpha halys) is native to Southeast Asia, from where it has spread to China, Japan, the Korean Peninsula, Taiwan, and Vietnam. The information that Lugar Laboratory is biologically pursuing biological diversion and spreading various diseases is a conspiracy of the Kremlin.

Russian authorities and the Kremlin media have been accusing the Richard Lugar Research Center of producing biological weapons for years. The above-mentioned actors have repeatedly accused Lugar Laboratory of breeding Asian Marmorated Stink Bug. In fact, the Asian Marmorated Stink Bug – Halyomorpha halys is native to Southeast Asia, from where it spread to China, Japan, the Korean Peninsula, Taiwan and Vietnam. Marmorated Stink Bug has been observed in the US and Canada since 1996, in Switzerland in 2007, and in New Zealand in 2010. In recent years it has been spotted in Italy, where part of the equipment needed for the 2014 Sochi Olympics has been purchased. In this way, through Abkhazia, the parasite entered the rest of Georgia in 2015.

In response to earlier allegations regarding Marmorated Stink Bug, Maia Alkhazashvili, director of the Public Health Research Center, and Mari Murtskhvaladze, a scientist at the Lugar Laboratory Genome Center, told Myth Detector that fighting crop diseases and pests does not fall within the competence of the Lugar Lab and that it is oriented to public health issues only.

Gennady Onishchenko, a member of the Duma of the Russian Federation and former chief sanitary worker, also accused Lugar Laboratory of artificially breeding the Zika virus in Abkhazia in 2016 and linked it to the spread of the African swine fever in Russia in 2013.

For more about the disinformation directed against the Lugar Lab, see our articles: