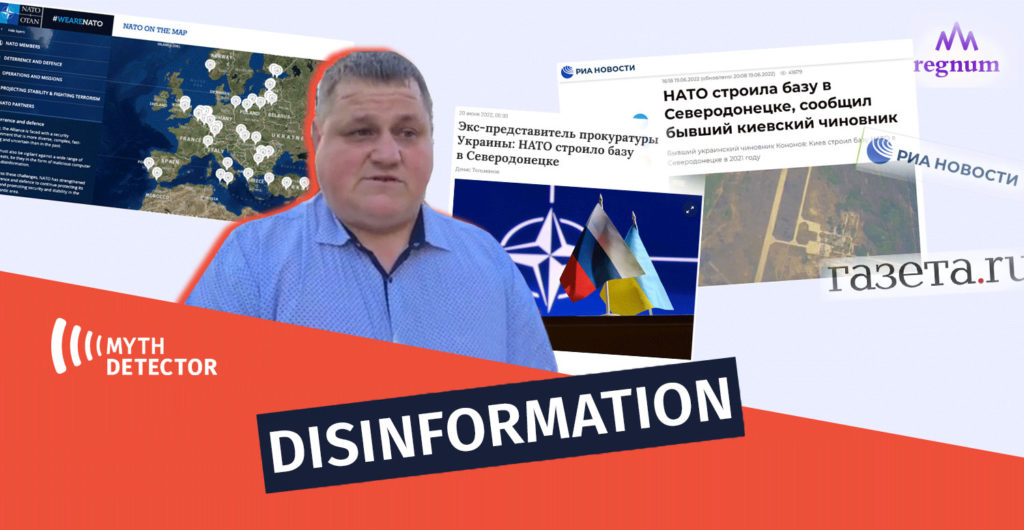 On June 19th, Russian state-controlled media outlet ‘RIA Novosti’ published an article entitled “NATO was building a base in Sievierodonetsk, reports a former high-ranking official from Kyiv.” The article is based on an interview with Vladimir Kananov, a former deputy head of the Starobelsky District Prosecutor’s Office of the Luhansk Oblast. According to the Russian media, he “voluntarily moved to the side of the so-called Luhansk People’s Republic.”

In an interview with RIA Novosti, Kananov states that the construction of a NATO military base on the territory of Sievierodonetsk Airport was started by the Ukrainians in 2021. According to Kananov, all access roads to the airport were closed, armed forces were deployed in the settlement, and no one was allowed to enter. According to him, in the second half of last year, he already possessed information about the deployment of a NATO base on the mentioned territory.

Based on RIA Novosti, the information was published by other Russian-language publications as well (1, 2, 3, 4, 5). 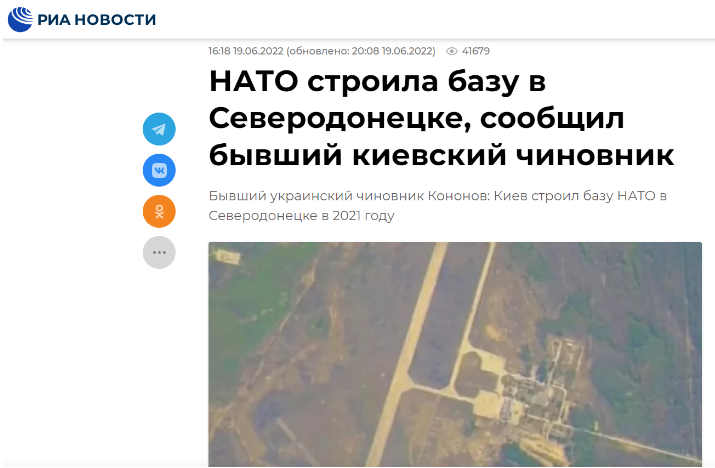 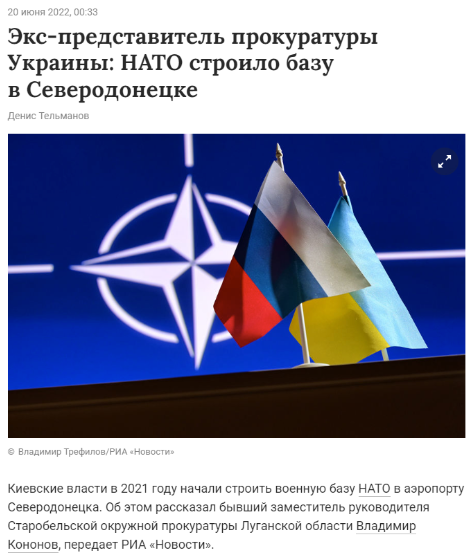 The claim that a NATO military base was being built in Ukraine in 2021 is without evidence. The information provided by Kananov is not accompanied by any photo or video material, nor any document that would confirm the construction of the base. Information about the construction of a NATO base in Sievierodonetsk cannot be found in credible Ukrainian sources either. In fact, in 2020, instead of a NATO base, Ukraine announced the construction of a military base that would match the standards of NATO. Notably, there are currently no NATO bases in the territory of Ukraine, nor will be any in the future until the country becomes a member of the Alliance or signs a specific military cooperation agreement with NATO member states.

On February 6th, 2020, the then Minister of Defense of Ukraine – Andriy Zagorodnyuk, announced that Ukraine was going to build several military bases in accordance with NATO standards in Sievierodonetsk and Mariupol.

“Because some of our brigades still reside under horrific conditions, we plan to build several good infrastructure objects — just for everyone to see that we also can have a base in line with NATO standards.” – stated Zagorodnyuk in 2020.

Information about the alleged construction of a NATO base in Ukraine cannot be found in any open source.

There are no NATO military bases in Ukraine

The NATO interactive map shows the exact locations of NATO bases across the continent. There is no NATO base on the territory of Ukraine. Among non-members, only Kosovo and Iraq have NATO military presence. The first is to fulfil the mandate of the UN Security Council, and in Iraq, at the request of the government of the country, to fight terrorism.

Disinformation about the alleged construction of a military base in Sievierodonetsk has been disseminated in the past as well. In 2020, Russian media reported that the two military bases in the Donbas and Luhansk regions deploying the US and other allied forces would threaten Crimea. It was also reported that a naval base was being built in Sievierodonetsk, although the city is hundreds of kilometres away from the sea. The allegations were made on the basis of a statement made by the then Minister of Defense of Ukraine, Andriy Zagorodnyuk. On February 6th, 2020, the Minister announced that Ukraine intended to build several military bases in accordance with NATO standards in Sievierodonetsk and Mariupol.

In addition to the Sievierodonetsk base, disinformation about the existence of NATO military bases in Ukraine has been reported in the Russian media earlier as well. In 2021, Russian media reported that the port of Odesa had been handed to NATO as a naval base. This allegation was verified by the fact-checking organization Stopfake. The article states that NATO ships were in the Black Sea due to the Russian threat, although there are no NATO bases in Ukraine.