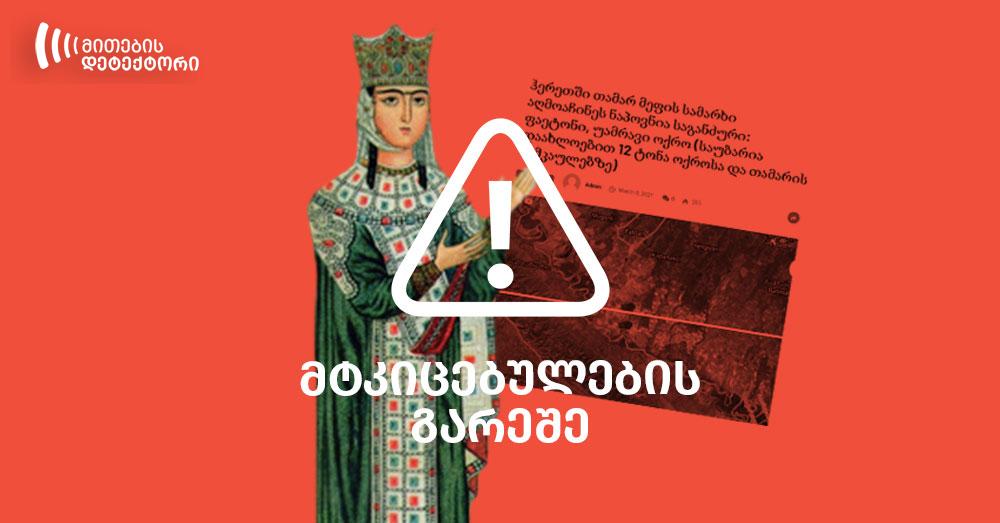 On March 8, 2021, Facebook user Vasil Papiashvili published a post to a public group “ჰერეთის სახლი | Heretis saxli” with a caption: “A sensational discovery in Hereti!! It is happening right now! Queen Tamar’s remains are not yet considered to be discovered, but now we are dealing with a huge discovery!” According to the post, a farmer discovered a historical burial place when cultivating the land in Zaqatala. Facebook user Vasil Papiashvili claims citing a Zaqatala closed group that the treasure allegedly belonging to Queen Tamar was discovered: a phaeton, gold and remains of the dead. As of March 9, Vasil Papiashvili’s post has more than 2,600 shares and 835 reactions.

Identical information titled “Queen Tamar’s grave was discovered in Hereti; a phaeton, a lot of gold was found (about 12 tons of gold and Tamar’s jewelries)” was also published by geovip.com and its link, according to CrowdTangle, was shared to three public groups. 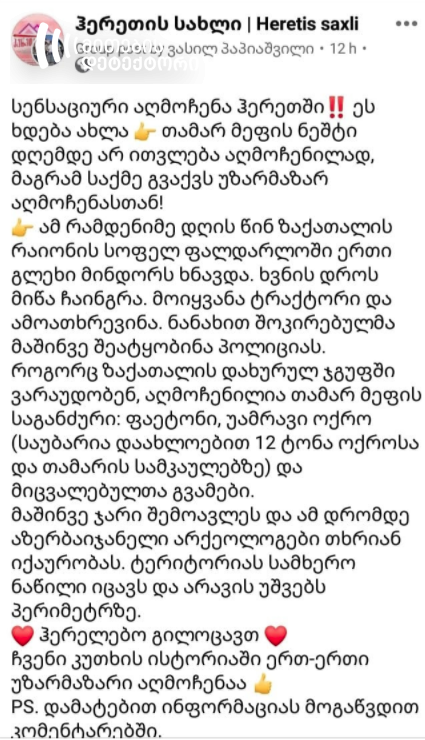 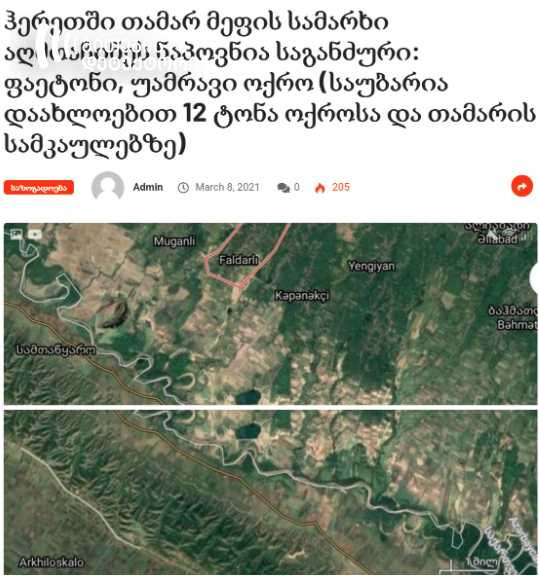 The information as if Queen Tamar’s grave was discovered in Hereti has no evidence. Neither the National Agency for Cultural Heritage Preservation, nor the Ministry of Foreign Affairs of Georgia has confirmed the reports. The latter said that they reached out to the Azerbaijani side, but there is no evidence about the discovery of Georgian historical grave so far.

Myth Detector reached out to the National Agency for Cultural Heritage Preservation and the Ministry of Foreign Affairs of Georgia to verify the information. Beka Baramidze, head of the Agency’s Public Relations Department, told us that they had no information about the discovery of Queen Tamar’s grave, but they had verified the spread reports with the Georgian Foreign Ministry.

Gomurashvili, a representative of the Foreign Ministry’s press office, noted in her written comments to Myth Detector that the reports about discovery of a Georgian historical grave on the territory of Azerbaijan were not confirmed. She also said that various sources were verified, including through communication with the Azerbaijani side, but none of the official sources have confirmed the reports so far.

Mtavari Arkhi TV also aired a story covering the same topic. The TV channel refers to a local from Qakh district of Azerbaijan as its source. According to the story, archaeological excavation has been launched in two villages of Azerbaijan – Pardarlo and Muğanlı, leading to the closure of these villages.