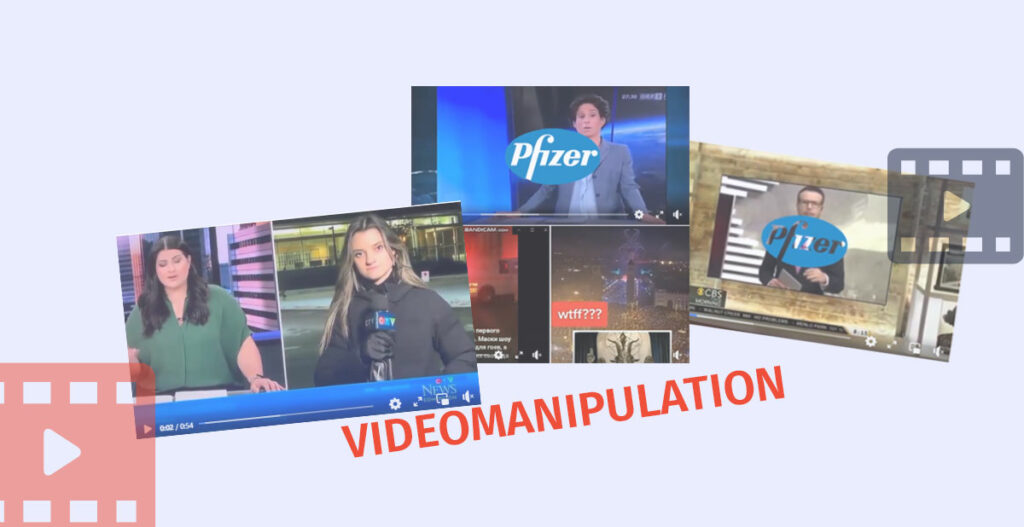 In mid-January, a number of Georgian Facebook users (1, 2, 3) began circulating videos claiming COVID-19 vaccines were causing people to injure, potentially fatally. Two posts used cases of reporters fainting on live TV as evidence of their claims. Another post linked the issue to a Jewish conspiracy, with videos showing Jewish people dancing in groups during the pandemic, and Satanism, with a video claiming to show a Satanic image during a fireworks display.

The videos are being circulated with false descriptions. In fact, the COVID-19 vaccine has been proven to be safe, and none of these videos show actual evidence of people being negatively affected due to the vaccine. Many of the clips shown misrepresent the facts. Similarly, there is no Jewish or Satanic conspiracy aimed at influencing people through the COVID-19 vaccine.

The first Facebook post features a video of a CTV Edmonton broadcast where a reporter has a medical emergency on live-air. Contrary to the claim by the Facebook user that the reporter died as a result of the COVID-19 vaccine, Canadian TV news reporter Jessica Robb is alive and recovering well. In a Twitter post, she explains that the medical event had no connection with COVID-19 and that many baseless theories have been spread about the cause. 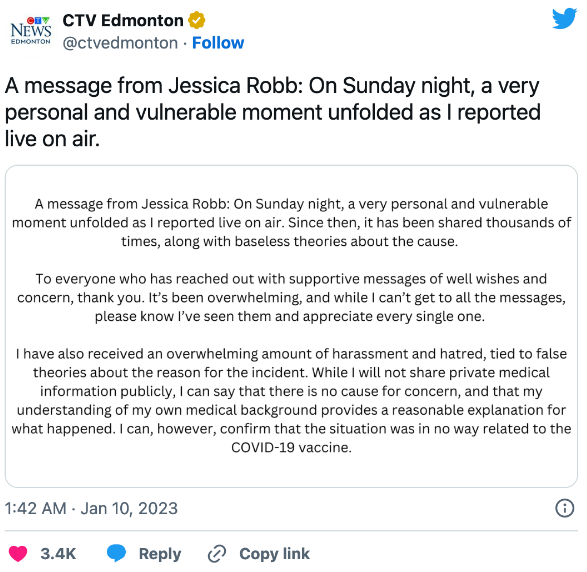 The clip of her medical event was also used in the compilation video shared in the other two Facebook posts. This video focuses on the Pfizer vaccine and claims that multiple instances of people fainting on live TV was caused by the vaccine. However, the majority of the clips shown in the video consist of people fainting due to dehydration or a lack of food. For example, after fainting during a broadcast, the German journalist Clara Pfeffer tweeted that in the future she would have breakfast before an early start.

Similarly, the stand-up comedian Heather McDonald, who suddenly collapsed during her set, told TMZ that she had not had anything to eat and had only drank half a Red Bull and some water before appearing on stage.

The Austrian MP Eva-Maria Holzleitner and Atlanta Hawks commentator Bob Rathbun both lost consciousness due to a lack of fluids, in other words dehydration. This is likely the situation for the bridesmaid who fainted in the clip as well. People fainting during weddings is surprisingly common, and can be due to a number of causes including stress, a lack of food or drink, or bad ventilation in the wedding venue.

In one case, the cause was directly related to the COVID-19 vaccine. One of the clips shown in the video compilation is of nurse manager Tiffany Dover who fainted after receiving one of the first doses of the vaccine in Chattanooga, Tennessee. However, she explained to reporters afterwards that she has a condition that sometimes causes her to faint when she feels pain. This response occurs in a number of people and all vaccines can cause a similar response due to the pain caused by the needle injection. Myth Detector previously fact-checked disinformation spread about Tiffany Dover’s death.

Finally, Tanja Erichsen, the head of pharmacovigilance at Denmark’s Medicines Agency who fainted during a press conference on April 14 2021 to announce Denmark’s halt to the rollout of the AstraZeneca COVID-19 vaccine, had not received any vaccine at the time of the event.

The last Facebook post features two videos that link the COVID-19 vaccine to Jewish and Satanic conspiracy theories. The first video consists of two clips, the first of which shows people in Hazmat suits dancing, with Russian text overlaid on it claiming that during the first quarantine, “goyim” were forced to wear masks and that Jewish people didn’t in their own communities. The second video shows Orthodox Jews dancing as both Russian and Ukrainian flags make an appearance.

The first video was published on 13 October 2020 by Szymon S on YouTube and titled “Covid party in Jewish style – Coffin Dance [from] Israel.” The Coffin Dance, also known as the coffin-carrying dance or casket dance, is performed in Ghana by the coffin-bearers as a funeral ceremony that includes elements of joy. This dance went viral at the start of the pandemic and was recreated all over the world as a way to get people’s attention and to include some nuances of joy during hard times. Both of the videos play into the anti-semitism that has arisen during the COVID-19 pandemic.

The last video, that of the supposed satanic symbol during a fireworks display, originates from footage of this year’s Magic Fountain light show in Barcelona to celebrate the New Year. Drones were used to create different faces, including that of a Samurai. At midnight, the drones formed the white dove of peace.

According to the official website for Barcelona, the show was created to take the audience on a “journey through the original cultures of planet Earth, celebrating the community and the fact that, together, we have made a trip around the sun.” In the 12 minutes leading up to midnight, over two hundred flying drones were used to sketch masks in the air, which were dedicated to different cultures. There is no evidence that any Satanic imagery was shown during the performance.