Videomanipulation as if Ukrainians Set Fire to an Orthodox Church 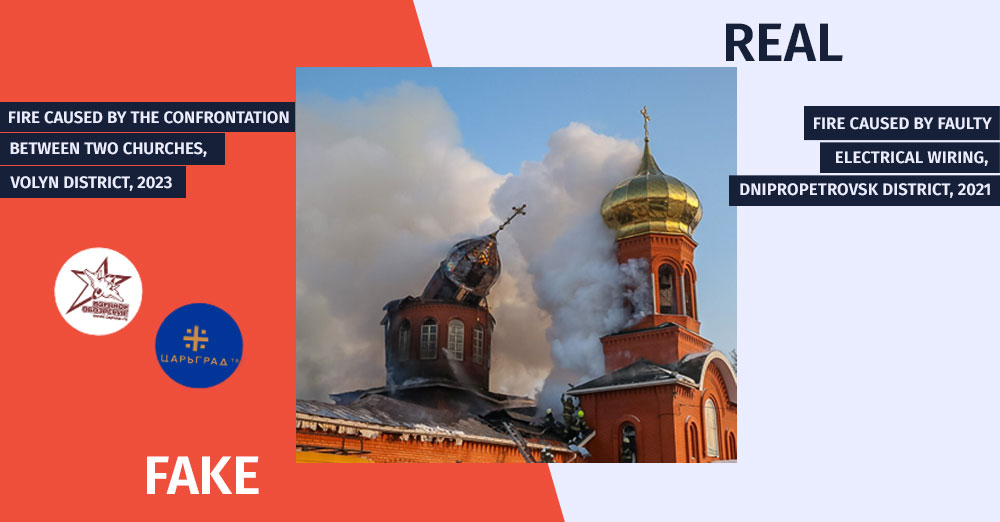 Since January 11-12th, Kremlin propaganda outlets tsargrad.tv and topwar.ru and several other Russian-language publications (1, 2, 3), as well as Georgian (1, 2) and Russian-language (1, 2, 3, 4) Facebook accounts have been circulated a video depicting a fire in the church. According to the attached description, the church in the village of Ovadne, Volyn District, Ukraine, was set on fire after its leader refused to come under the authority of the Ukrainian Patriarchate.

The video is being disseminated with a false description. In fact, the footage was taken two years ago, in January 2021, and depicts a fire that broke out in a church in the Dnipropetrovsk region, not Volyn. Furthermore, the cause of the fire was not a conflict between the churches but a problem with the electrical wiring. As for the alleged new fire, according to the Volyn administration of the State Emergency Service and the head of the Ovadnivska community, no similar fires have been recorded in the churches located in the region.

After verifying the video using the tool InVId, it was determined that the video was shot in January 2021 and did not depict the burning of a church in the village of Ovadne, Volyn Region. By spreading the video manipulatively, the Kremlin propaganda is trying to prove that the Ukrainians started burning churches that are connected to the Moscow Patriarchate and refused to obey the Orthodox Church of Ukraine.

In fact, the church shown in the footage is the Cathedral named after Saint Theodos of Chernihiv, located in the village of Novoaleksandrivka, Dniprovskyi District. Photos and video footage of the fire in the church can be found both in the media and on the website of the Dnipropetrovsk District Service for Emergency Situations and the District Ecclesiastical Diocese.

Several posts related to the fire are published on the Facebook page of the State Service of Emergency Situations of Ukraine. In the post published by the state service at the end of the day on January 19th, 2021, it is mentioned that the fire has been extinguished, and no one was injured. 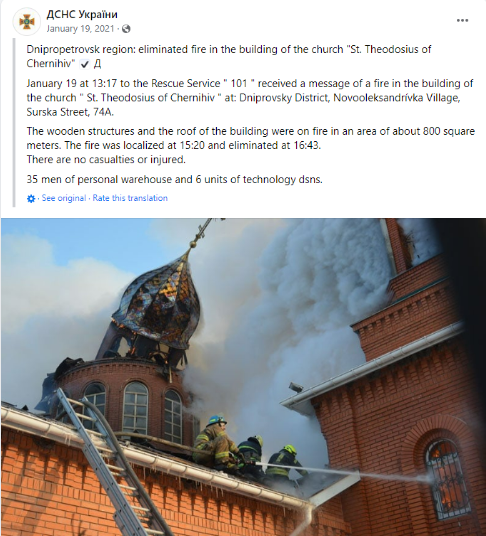 The church that caught fire is connected to the Moscow Patriarchate, although the cause of the fire in the church was not a conflict between the two churches. According to the prepared material of the Union of Orthodox Journalists (СПЖ), which is also linked to the Moscow Patriarchate, according to the conclusion of the Emergency Situations Service, no one started the fire intentionally, and the cause was a problem with electrical wiring. 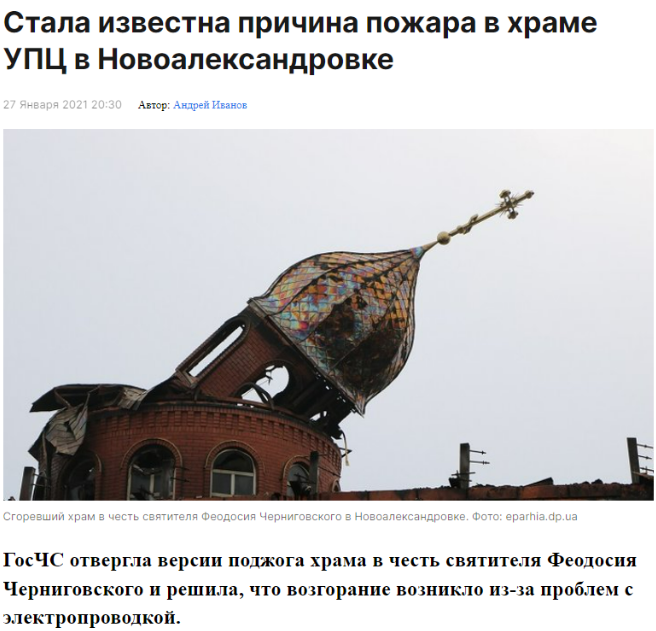 As for whether any church in the village of Ovadne caught fire recently, as the local media “Волинська служба новин” writes, such a fact did not happen. The article mentions that, according to the regional administration of the State Emergency Service, no similar fires have been reported, and the head of the Ovadnivska community, Sergiy Panasevich, said that everything is in order with the churches located in the area.

On December 1st, the President of Ukraine, Volodymyr Zelenskyy, signed a decree on certain aspects of the activities of religious organizations in the country. Based on this decree, sanctions were imposed on a number of clerics of the Ukrainian Orthodox Church (Moscow Patriarchate).

For more information on the issue, see the articles prepared by “Myth Detector:”