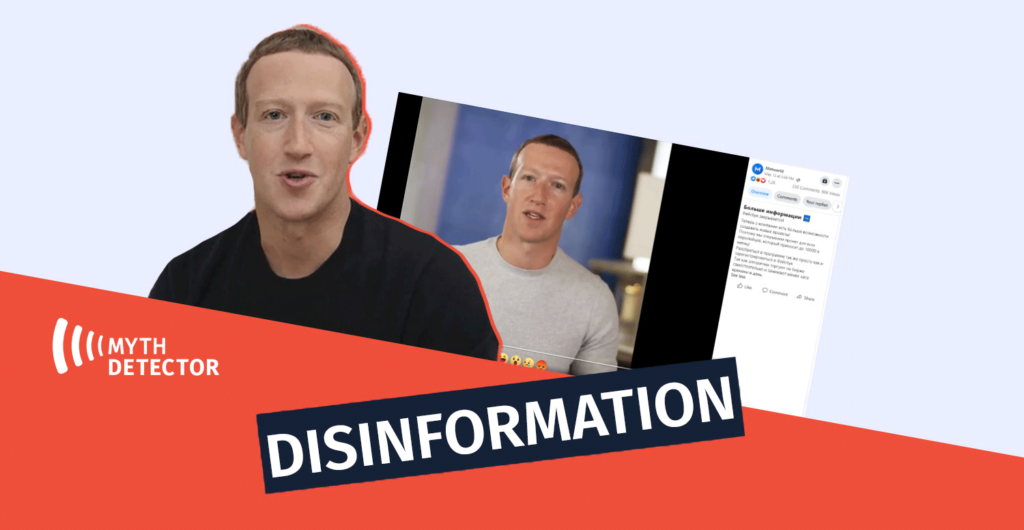 On May 12th, the Facebook page ‘Metworld’ published a video of Mark Zuckerberg, founder of Meta. The video is dubbed in Russian. According to the video, Facebook is shutting down and leaving Russia. In addition, according to the Russian-language voiceover, Zuckerberg is introducing a new project named Libra, which will be accessible to European users. The Libra algorithm is allegedly capable of trading on the stock exchange market on its own and generates a daily income of 500 euros.

Zuckerberg: “Facebook is shutting down and leaving Russia. Now we have more opportunities to carry out new projects, especially for the people of Europe.” 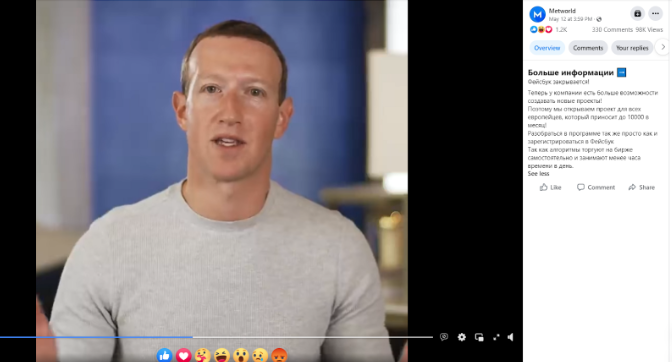 The video of Mark Zuckerberg is being disseminated with fake Russian dubbing. Facebook is not leaving Russia, as the social network has been blocked by “Roskomnadzor” [Federal Service for Supervision of Communications, Information Technology and Mass Media]. The company also did not create a program for trading on the stock exchange market. In 2019, Facebook was going to develop the Libra cryptocurrency, but in the end, the project did not materialize. The information presented in the video carries the threat of cyber fraud.

The disseminated video uses footage from Mark Zuckerberg’s interview with American writer and investor Tim Ferriss. The interview was published on Ferris’ YouTube channel on March 24th, 2022. In the interview, Zuckerberg talks about the company’s long-term strategy, solving complex technical problems, the working mechanism of Meta, building a metaverse, principles of business and education, the role of religion, etc. During the conversation with Ferris, Zuckerberg never mentions that Facebook is leaving Russia. The interview also does not mention the Libra project. 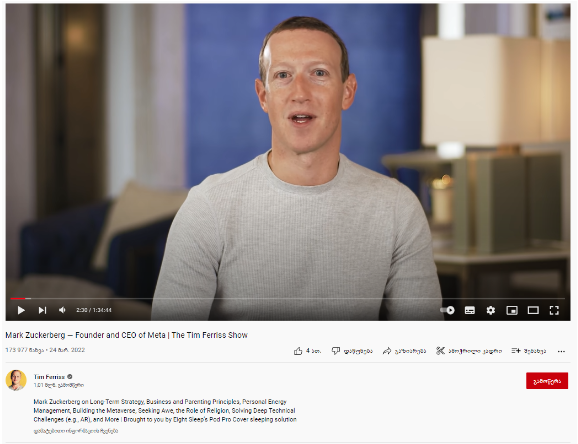 Notably, against the backdrop of the Russian-Ukrainian war on March 4th, Roskomnadzor banned Facebook in Russia. Roskomnadzor also declared Meta to be an extremist organization. The reason for restricting access was “discrimination against Russian media.” Earlier, due to the spread of propaganda, the social network began to restrict access to the accounts of various Russian state media. The company did not decide to leave Russia. Following the announcement of Roskomnadzor’s decision, Facebook’s president of global affairs and public relations, Nick Clegg, said the company will continue to do “everything it can to restore its services, so they remain available to people to safely and securely express themselves and organize for action.” Despite the decisions of Roskomnadzor, residents of Russia can use Facebook using a VPN, a virtual private network.

As for the Libra project, Libra was supposed to become Facebook’s cryptocurrency. The company announced a plan to launch a cryptocurrency in 2019, but the project was ultimately unsuccessful, and Facebook decided to sell its cryptocurrency project. Facebook does not have a program that can independently trade on the stock exchange market.

The disseminated information carries the threat of cyber fraud

In the comments section of the widespread video, the ‘Metwоrld’ Facebook page points to the site krak.tradxinfo.xyz, where one can allegedly register and earn an income of 7,000 EUR per month. To register, the site asks for a phone number and email details. The site uses a photo of Mark Zuckerberg to give the impression that the project is linked to Facebook and Meta. 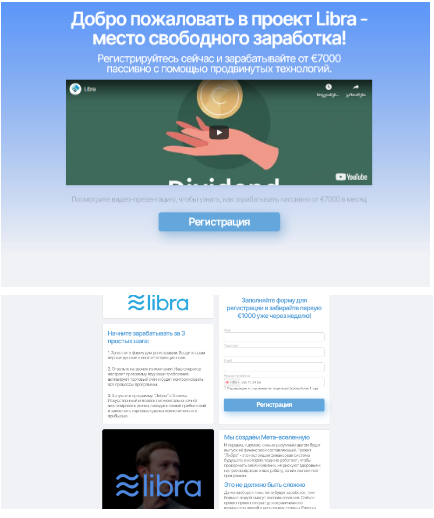 In fact, the site is not related to the official website of Meta. Meta does not have a Libra project. Considering that the site offers an easy, highly paid job, but does not indicate the details of the work, the information offered carries the threat of cyber fraud. The transfer of personal contact information to suspicious sites can lead to various cyber frauds, as one’s email can be used for phishing, malware, spam, etc.