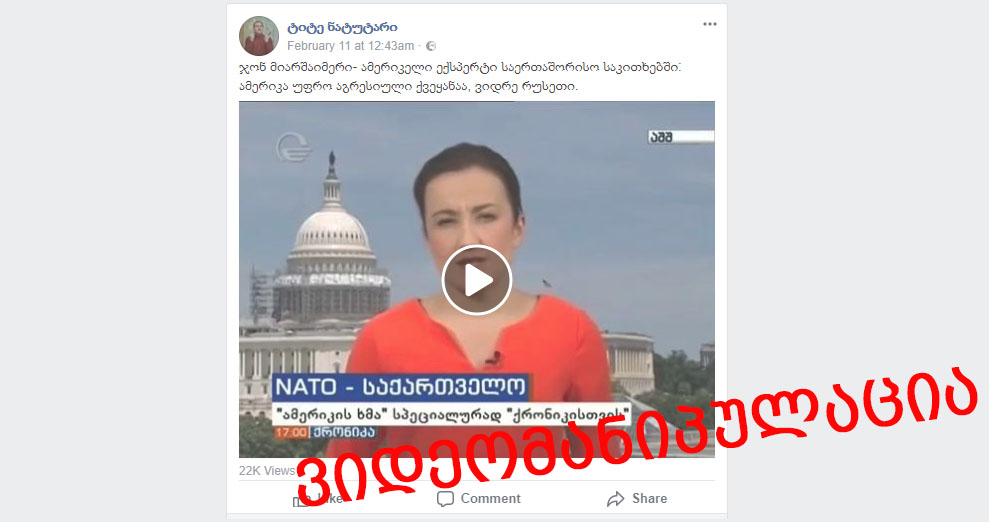 On February 11, a social network user posted a video on Facebook titled “John Mearsheimer – American expert on international issues: America is more aggressive than Russia.” The video depicting Imedi TV’s logo was aired with the following caption: “The Voice of America specially for Qronika,” creating an impression that the presented video, which claimed that America was more aggressive than Russia, was prepared by the Voice of America (VOA) specially for Imedi TV’s news program Qronika.

The video posted by Facebook user, Tite Natutari and having 22 000 views and 340 shares on Facebook (as of February 21), triggered controversial reactions. A part of users slammed the Voice of America for anti-Western content, and the other part expressed negative attitude towards Georgia’s NATO integration. Actually, the released video is manipulative, because it provides only one fragment of the story prepared by the Voice of America on June 13, 2016, where the position of only one expert is voiced. The news story prepared by the Voice of America and fully aired by Imedi TV’s news program Qronika provided different views on NATO expansion and Georgia’s NATO integration. Analysis of the Facebook profile of the user who manipulated VOA’s story allows to suppose that he is a troll.

The story about Georgia’s integration into NATO was prepared by the Voice of America on June 13, 2016 and it provides the opinions of John Mearsheimer, an American political scientist; Philip Breedlove, NATO’s former Supreme Allied Commander in Europe, and Stephen Biegun, Chief of Staff of the United States Senate Committee on Foreign Relations.

Ia Meurmishvili, the author of the story, claims that according to John Mearsheimer, America is more aggressive than Russia, because it participated in seven wars after the end of the Cold War, while Russia used military force only in Georgia, Ukraine and Syria. In other comments, he expressed skepticism towards the membership of Georgia and Ukraine to NATO.

The opinions provided in the second part of the story differ from those of John Mearsheimer. Philip Breedlove, NATO’s former Supreme Allied Commander in Europe, claims that Russian President Vladimir Putin’s “number one goal is to crack NATO.”

Breedlove also noted in the story that he would never describe Georgia as a crack in NATO, because Georgia is one of the best forces in the ISAF mission, stressing that the country has even exceeded NATO’s requirements for membership. Georgia is not a crack in the alliance, but it is an excellent member of our partnership, he added.

Stephen Biegun, Chief of Staff of the United States Senate Committee on Foreign Relations, who is also featuring in the story, claims that the Kremlin tries to convince the world that NATO poses a threat to Russia, but actually it is the only country on the continent that creates problems.

In the end, the reporter notes that ideological differences on NATO expansion are not heard only in Washington and that the issue will apparently be raised at the Warsaw Summit as well. The NATO Summit was held in Warsaw on July 8-9, 2016.

The VOA Editorial Board commented on disseminating only one fragment of its story in social media that completely changed its context:

“The Voice of America prepared one of the most comprehensive stories involving the opinions of all sides about Georgia’s NATO membership in June 2016. Recently, the party having no relations to the Voice of America doctored the story and disseminated its new version. The story contained only the opinion against Georgia’s NATO membership and western values. The doctored story incompletely presents and weakens VOA’s initial story through providing only one fragment of the initial story.

According to VOA Director Amanda Bennett, the Voice of America is committed to disseminating accurate, impartial and comprehensive information. The doctored version of this story does not represent VOA’s initial story on Georgia’s NATO membership covering all sides. We call on viewers to see the full version of the original story.”

Facebook user, who posted only one fragment of VOA’s story in social network, has been registered under the name of  Tite Natutari  and apparently is a troll. According to his account, he got registered in 2013 and lives in  Tbilisi.