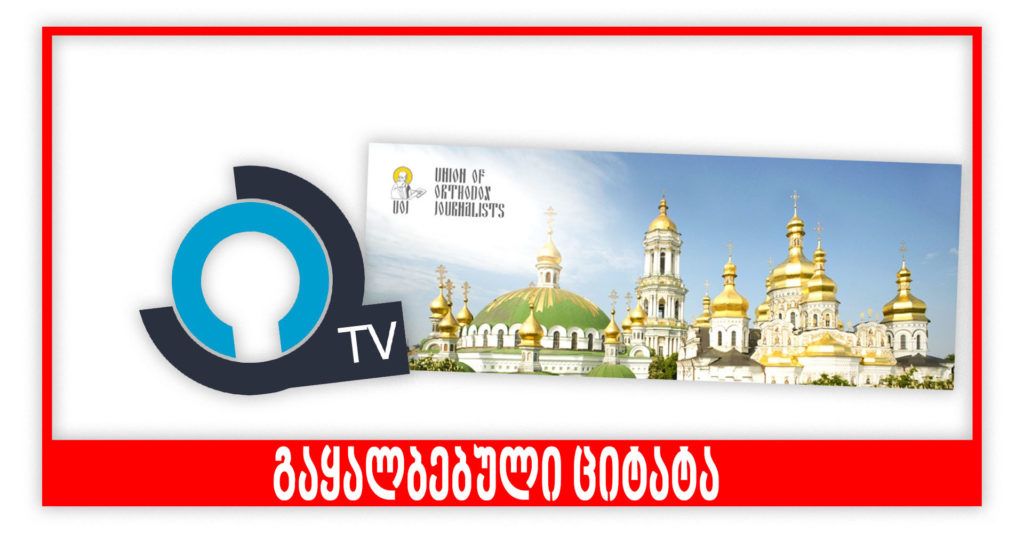 On January 19, a Georgian Trump supporter, Beka Vardosanidze, spoke in a program “Alt-Interview” at an ultra-nationalist TV channel Alt TV. He claimed that Biden had made a statement about allowing a nine-year-old child to change sex. We also find similar information in a material disseminated by the Union of Orthodox Journalists on December 7, 2020.

Alt-Info, Alt-Interview, January 19, Beka Vardosanidze: “Of course, Biden has made a statement about the nine-year-old child – that we should allow a change of sex.”

Union of Orthodox Journalists, December 7: “In the United States, Biden supports a sex change of an 8-year-old child. What is going on in the world?” 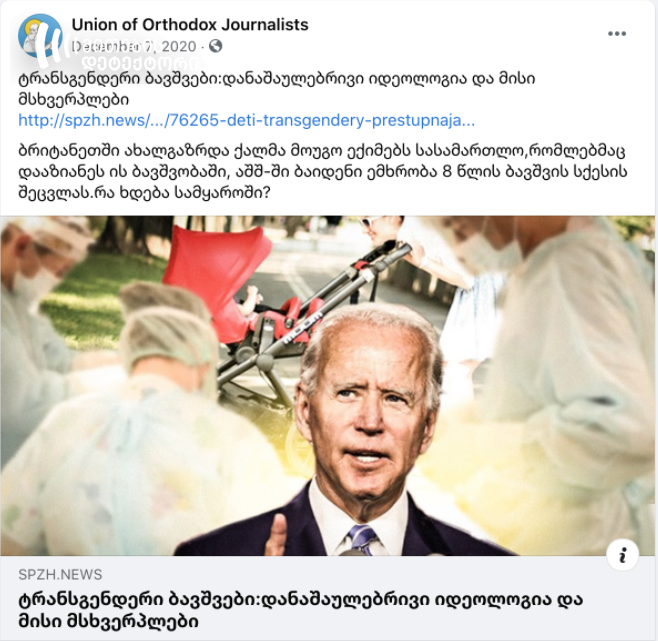 Beka Vardosanidze and the Union of Orthodox Journalists incorrectly disseminate Joe Biden’s statement. Biden has not mentioned a sex change in his statement, he was rather speaking about decreasing discrimination towards transgender people.

On October 15, 2020, Joe Biden was a guest at ABC News program. A person from the audience asked him about LGBTQ+ people and asked him to define how he would protect the rights of these people. The author of the question also underlined several restrictions, imposed by Donald Trump, for example banning transgender people from joining the army and also noted that her 8-year-old daughter is transgender.

It was in response to this question that Biden said that, first of all, he would change the law and abolish all such restrictions. He then added that transgender children should not be subject to discrimination – he has not mentioned a change of sex.

Biden’s statement was followed by dissemination of the fake quote among his opponents. According to this fake quote, Biden said that he wanted an 8-year-old child to change sex, that she had the right to do so, and there was no reason to deny her this action. Beka Vardosanidze and the Union of Orthodox Journalists disseminated Biden’s quote precisely with such an interpretation. 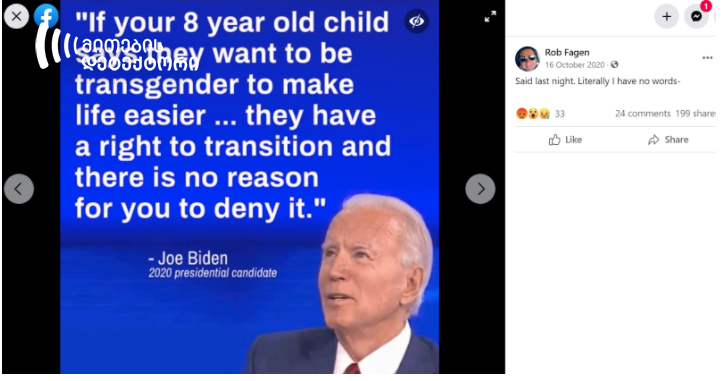 This falsified quote of Joe Biden has also been verified by American fact-checking platforms. Reuters even looked into Biden’s electoral campaign webpage. The website reads that Biden supports transgender people and will provide full access to all appropriate health care resources, but there is no mention of supporting sex change in children.

About the Union of Orthodox Journalists 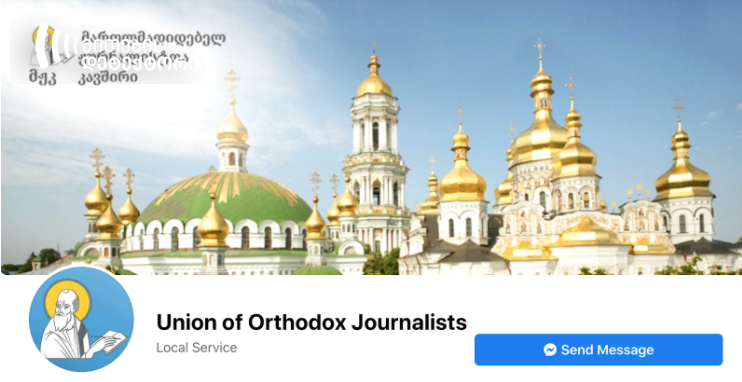 Georgian Facebook page of the Union of Orthodox Journalists was created on October 7, 2020. 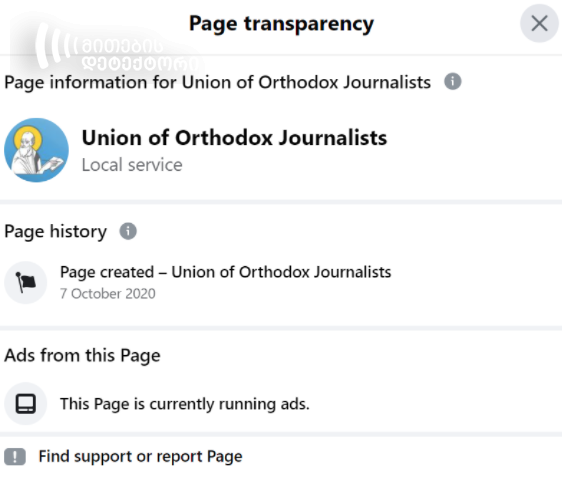 As for the organization’s website, it was registered in 2018 and its IP address is located in Texas.

“About Us” section of the organization’s website reads that it was created in Ukraine in 2015 to “fully and objectively” cover the persecution of the Head of the Ukrainian Orthodox Church, Metropolitan Onuphry, by “Ukrainian authorities”.

The website operates in Ukrainian, Russian, English, Greek, Romanian, and Georgian languages and disseminated identical materials in all languages. The Georgian Facebook page of the Union includes materials against Biden and the Patriarch Bartholomew of Constantinople, while the positions of the Government of Russia are voiced. 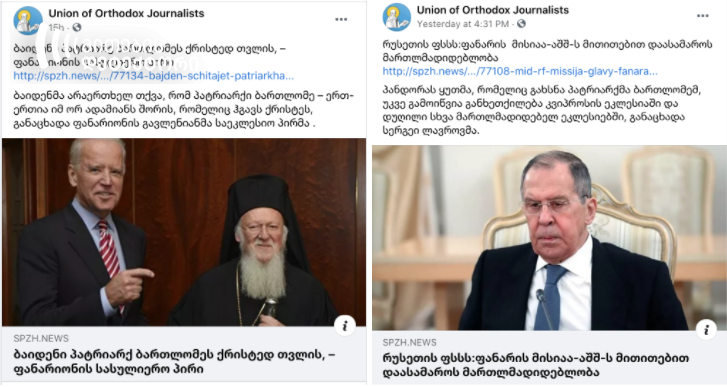 The newly created Georgian Facebook page also includes a sponsored material on the topic of gender. 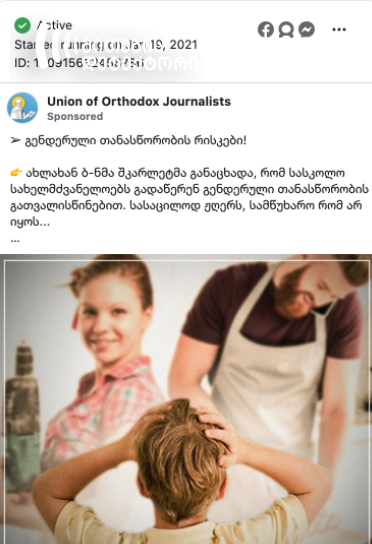