Urgent Need or “Putting in the Corner” – When does the Government Step in to Separate Child from Parents? 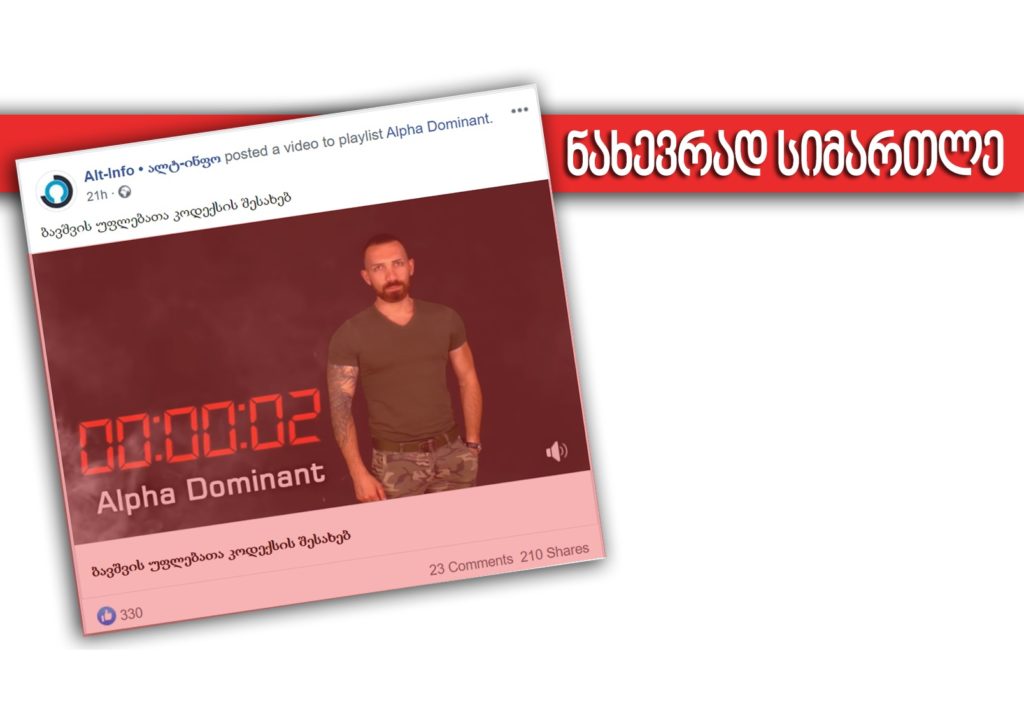 On September 27, Facebook page Alt-Info posted a video by Emre Kuchuk known as Alpha Dominant, where he talks about the Code on the Rights of the Child. Kuchuk claims that the Code is presented in a positive light, but in fact, it is directed against a family. Emre Kuchuk also notes in the video that a parent has no right to pull a child by the ear or put a child in the corner. He says that the government may provide any reason for separating a child from parents. According to the video, kids’ movies uploaded on the Internet are still accompanied by gambling ads, although protection of minors against harmful influences is envisaged by the Code on the Rights of the Child.

Emre Kuchuk: “The main purpose of this Code is to grant the State unlimited rights to interfere with a family. For example, according to this Code, a parent has no right to pull a child by the ear because it is physical violence. A parent has no right to put a child in the corner because it is psychological violence. And if a child goes into hysterics somewhere in the shop demanding a parent to buy something and if the parent shouts at the child or takes him/her out by force, it can be considered both physical and psychological violence. The logic of this code gives the State a huge opportunity to provide any reason for taking a child away from parents.”

The video spread by Alt-Info is a continuation of the campaign targeting the Code on the Rights of the Child. It manipulatively interprets the new law and spreads disinformation as if the Code grants unlimited rights to the State as well as discretion to take a child away from family without any grounds. The second statement made by Alt-Info, according to which legal restrictions on placement of gambling ads in kids’ movies do not work in practice is true.

The information about the Code on the Rights of the Child provided in the video is exaggerated and torn out of context. It is part of a coordinated campaign that has intensified ahead of the upcoming parliamentary elections.

The examples provided in the video represent manipulative interpretation of the Code. The Code focuses on inhumane and degrading treatment of a child. Speculating with this article, accusing the State of unlimited interference in the methods of raising children by parents and claiming that the Code is directed against the family institution, is groundless manipulation. In fact, a child is separated from a family in extreme cases, when there is an immediate threat to a child’s life and health and when it is apparent that use of less strict measures within the next 24 hours will not ensure the protection of a child’s life and health. According to Article 26 (3) of the Code:

“Where the life, health or safety of the child is under immediate and direct threat, a social worker shall be authorised to make an immediate decision on the separation of the child from his/her parent and shall submit a relevant motion to a court to obtain consent within 24 hours. The motion of the social worker shall include necessary justification for the immediate separation of the child from his/her parent. A police officer shall participate in the assessment of the threat, whose positive or negative opinion shall be recorded in the relevant protocol.”

Social worker should justify the decision for immediate separation of the child and submit a motion to court. Social worker has not right to take any measures without legal grounds. Article 26 reads:

“A decision on the separation of the child from his/her parent shall be subject to a periodic review and returning the child to the family environment shall be in conformity with the best interests of the child.”

Article 28 of the Code is about family support programs aimed at strengthening the child and the family through the sustainable securing of their individual needs. Such programs involve supplementary social services, proposing the opportunity to obtain vocational education and employment opportunities for parents and providing other material or immaterial support.

Article 561 of the Law of Georgia on Broadcasting envisages the protection of minors against harmful influences, whereas Article 562 of the same law defines the categories of programs,  involving among others “the scenes depicting gambling and the information promoting its popularization.”  According to Article 5 of the February 28, 2020 Resolution of the Georgian National Communications Commission (GNCC), the restrictions imposed on the placement of programs defined by Article 562 of the Law on Broadcasting also apply to online pages, including the pages targeting children (for example, kids’ movies and game websites). It is banned to place any information that poses a risk to children (including the information that popularizes gambling) on such pages, in any form.

This part of the video posted by Alt-Info concerning the placement of gambling ads is true. The video highlights several web portals – srulad.com, iMovies.cc, adjaranet.com, which contain the sections of kids’ movies and animated films. Ads of online casinos in a form of banners and short video clips are really placed on these websites at the beginning of films, including kids’ movies that contradicts the GNCC resolution.

The GNCC resolution entered into force on September 1, 2020. Thus, placement of gambling ads in kids’ movies violates the resolution.

Campaign against the Code on the Rights of the Child

Antiliberal groups (Levan Vasadze, World Congress of Families, Alt-Info, Georgian Idea), pro-Kremlin media outlets (Georgia and World) and Russian organizations (Primakov Public Center) have long been involved in the campaign targeting the Code on the Rights of the Child. This issue has significantly intensified ahead of the October parliamentary elections.

Below are Myth Detector’s earlier publications on the same topic: