U.S. Statistics on Missing/Abducted Children and What do We Know about Franklin Scandal? 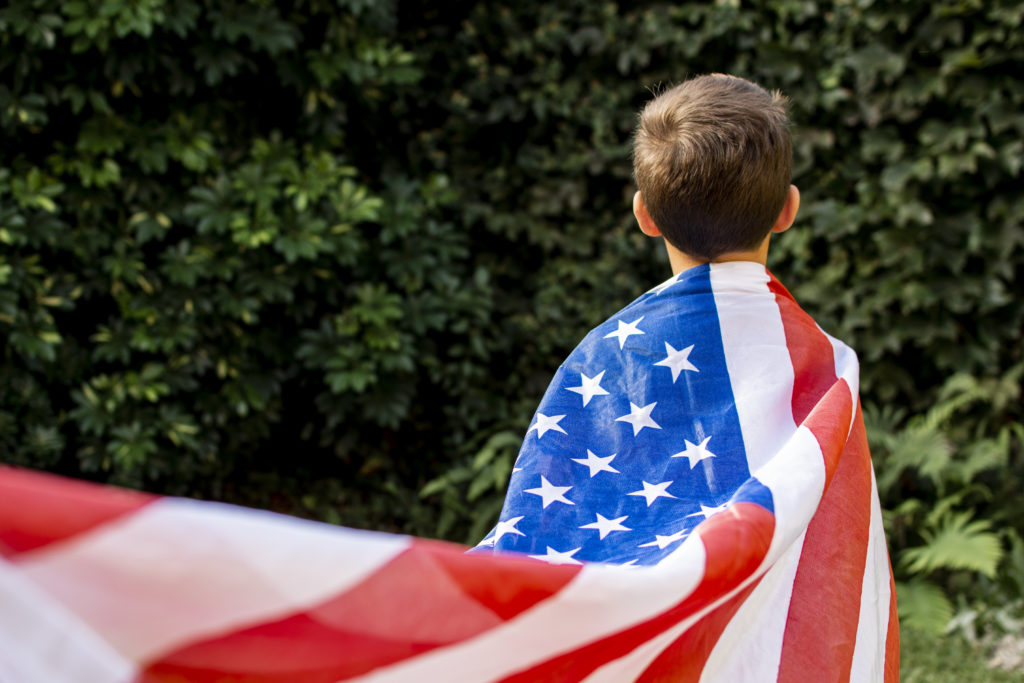 On August 19, online media outlet Georgia and World published an article headlined “American elite obsessed with Satanism.” Citing the so called “Franklin scandal,” the article claims that top officials are actively involved in child prostitution in the United States. It also notes that the United States does not compile statistical data regarding missing and/or abducted children.

Geworld.ge: “Some people say that over 200,000 children are missing every year; others suppose that this figure is exaggerated and the instances of child abduction are extremely rare. The problem is that the U.S. agencies carrying out statistical analysis on crime situation in the country, including the Federal Bureau of Investigation, are authorized not to report these cases… The so called “Franklin scandal” unfolded in Nebraska. It emerged that Republican politician Lawrence King was financing the largest child prostitution ring serving top officials and private individuals, including U.S. Presidents George H. W. Bush and Gerald Ford.”

Georgia and World’s claim that the Federal Bureau of Investigation (FDI) does not report the cases of missing children and that 200,000 children are missing every year is disinformation. In fact, according to the FBI statistics for 2010-2017, on average, fewer than 350 people under the age of 21 have been abducted by strangers in the United States per year. As for the so called “Franklin scandal,” both state courts and federal courts concluded that the accusations based on witness testimonies were “a carefully crafted hoax.”

How does the United States compile statistics on missing children?

Besides NCIC, the information about missing children is also distributed through AMBER Alert, a child abduction emergency alert created in 1996 to help find abducted children. AMBER stands for America’s Missing: Broadcast Emergency Response and was created as a legacy to 9-year-old Amber Hagerman, who was kidnaped while riding her bicycle and then brutally murdered. AMBER Alert instantly galvanizes communities to assist in the search for and safe recovery of an abducted child. The alerts are broadcast through radio, TV, road signs, cell phones, and other data-enabled devices. As of May 2020, 988 children rescued specifically because of AMBER Alert.

In 2018, there were 424,066 reports of missing persons, involving youth, entered into the Federal Bureau of Investigation’s National Crime Information Center (NCIC). A total of 612,846 missing person reports were submitted to NCIC, of those 85,459 records remained active as of December 31, 2018. Youth accounted for 34.8 percent of those active missing persons records.

According to the FBI, in 2019 there were 421,394 NCIC entries for missing children. In 2018, the total number of missing children entries into NCIC was 424,066. This number represents reports of missing children. That means if a child runs away multiple times in a year, each instance would be entered into NCIC separately and counted in the yearly total. Endangered runaways account for 91% of these cases, followed by family abductions – 4% and nonfamily abductions – less than 1%; further, critically missing young adults, ages 18 to 20, account for 4%. Of the nearly 26,300 runaways reported to NCMEC in 2019, 1 in 6 were likely victims of child sex trafficking.

According to the FBI statistics for 2010-2017, on average, fewer than 350 people under the age of 21 have been abducted by strangers in the United States per year.

What is “Franklin scandal?” 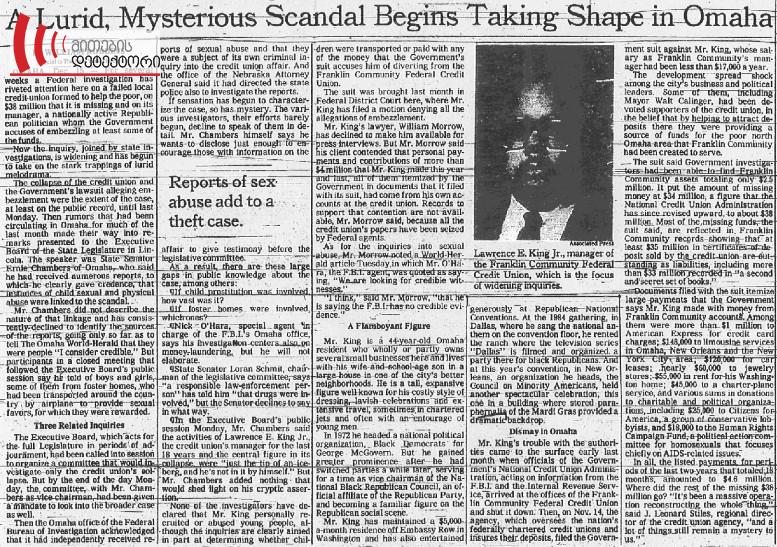 Some allegations emerged in 1988 that U.S. citizens of Nebraska, as well as high-level U.S. politicians were involved in a child prostitution ring. According to the testimonies from several witnesses, children in foster care were sexually abused at “wild parties.” The claims primarily centered on Lawrence King, who ran the now defunctFranklin Community Federal Credit Union in Nebraska since 1970 and simultaneously had close links to the Republican Party. According to some allegations, the ring was “a cult of devil worshipers involved in the mutilation, sacrifice and cannibalism of numerous children.”

Ultimately, both state courts and federal courts concluded that the accusations based on witness testimonies were “a carefully crafted hoax.” Witnesses acknowledged that they agreed to participate in the scam because they had believed that the ruse would eventually lead to lucrative book, television, and movie contracts.

Thus, the claims as if King financed the largest child prostitution ring, serving high-level politicians and private individuals are not confirmed by official sources. On the contrary, King was acquitted by both federal courts and state courts. 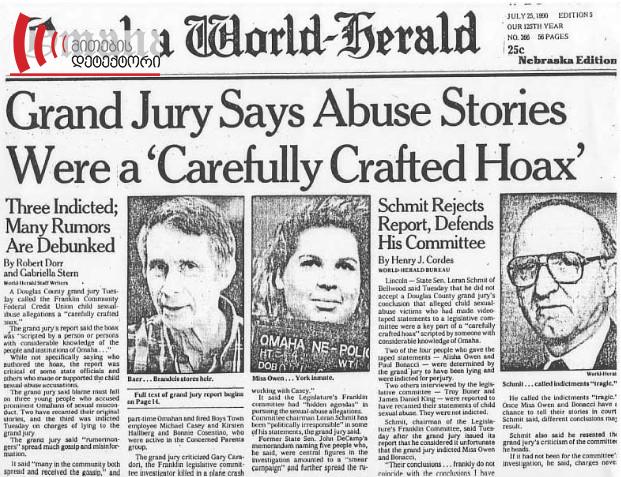