Two Myths about Foreign Ownership of Real Estate in Georgia 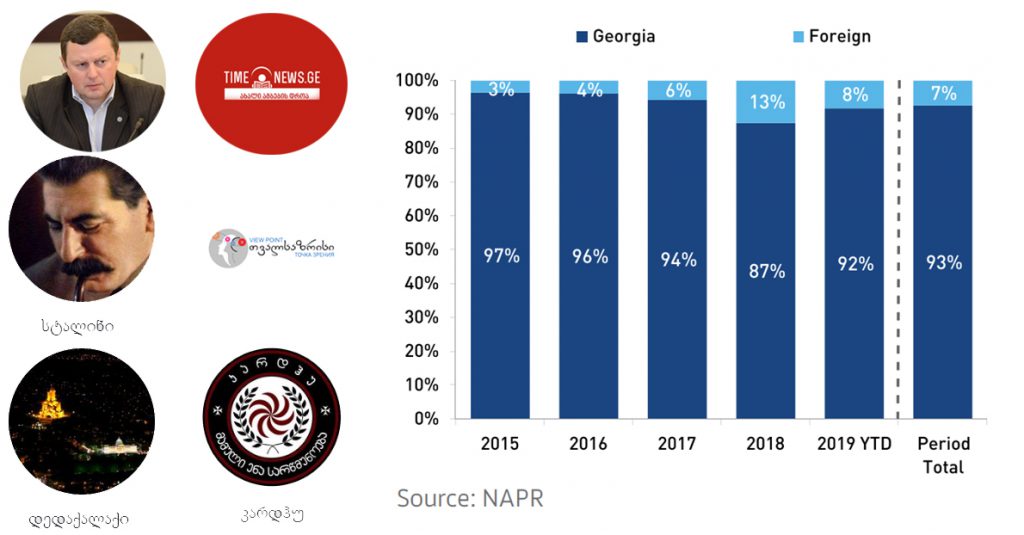 On January 15, an online media outlet, Georgia and World, released an interview with Dimitri Lortkipanidze, head of the Primakov Georgian-Russian Center, who claims that 134,000 apartments in Georgia are allegedly owned by Iranian citizens.

Earlier on January 7, the same issue was highlighted in the post released by Facebook page “დედაქალაქი” (Capital). According to the post, written by Ninuli Kavtaradze whom “Stalin” and tvalsazrisi.ge refer to as the founder of “დედაქალაქი,” Iranian citizens have purchased over 100,000 apartments in Georgia. Later on the same day, Kavtaradze’s post was shared by online media outlet tvalsazrisi.ge, and on January 8, it was published on the clickbait sites ambavi.cc and timenews.ge. On January 8, the post by “დედაქალაქი” was shared by Facebook page “Stalin” and on January 14 – by “კარდჰუ”.

The State Commission on Migration Issues has released a report Migration Profile of Georgia 2019, providing statistical data on the real estate purchased by foreigners in Georgia. The report does not provide only distribution of apartments by citizenship, but it also involves the data on real estate, including apartments, agricultural and non-agricultural lands. According to the statistical data, Russian buyers account for 40% (15,133) of real estate registered with the ownership right. As for Iranian citizens, real estate, including apartments and lands, purchased by them in 2015-2018, totals 5,598.

Thus, any claims that Iranian citizens have purchased over 100,000 apartments in Georgia are absolutely unreal. During the reporting period, Iranian citizens are prevailing with 42%, followed by Russian (18%) and European citizens (11%).

As an illustration, Facebook page “Stalin” released a photo depicting the women wearing hijabs. The photo creates an impression that it has been taken in Georgia; it aims at emotionally manipulating the readers. In fact, the photo was taken in Shiraz in 2005. Facebook page “დედაქალაქი” was created on June 29, 2016. The page publishes far-right and antiliberal content. The posts written by Ninuli Kavtaradze, who, according to “Stalin,” tvalsazrisi.ge and progressnews.ge, is the founder of “დედაქალაქი,” are frequently published on the page.

In its earlier publications, the Myth Detector has already written about disinformation spread by “დედაქალაქი”. According to one of the reports released by the Media Development Foundation in 2019, this page was among other Facebook pages involved in an organized campaign against Tbilisi protests.

Alia Holding LLC was established in 1966 and includes the newspapers Alia and Kviris Qronika. The owner of 100 percent of shares in the holding is Giorgi Bregvadze. In its fifth monitoring cycle report, the European Commission Against Racism and Intolerance (ECRI), based on MDF’s study, named the outlets of the Holding because of their homophobic and xenophobic editorial policies and recommended the government to revise its contracts with these media outlets.