Two Lies about the Association Agreement with the European Union 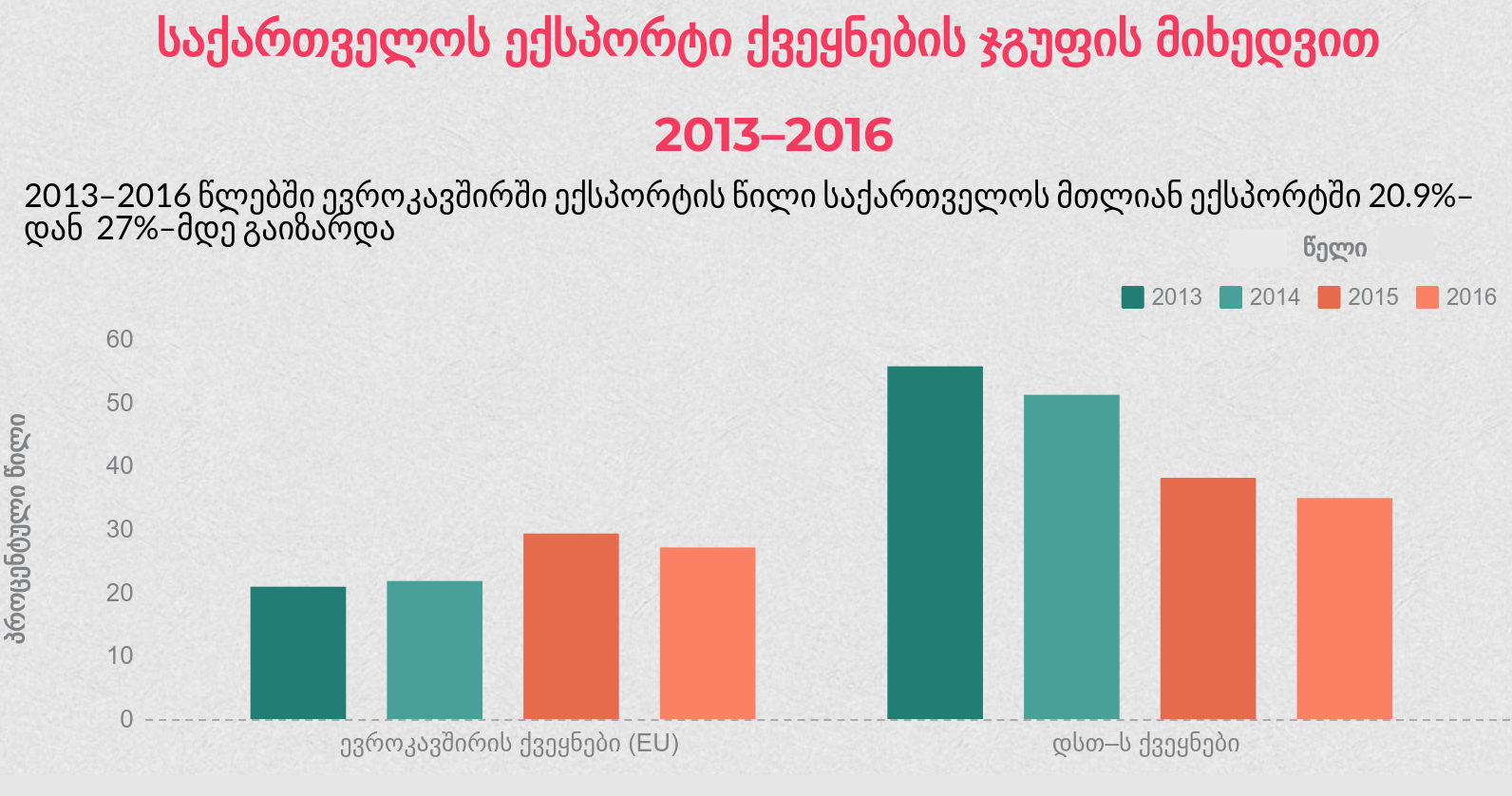 On November 1, the online newsletter Geworld.ge published an article entitled “We want Georgian Georgia” The article cites a comment by politologist Hamlet Chipashvili, in which he states that Georgia’s Association Agreement with the EU puts Europe in an advantageous position, as it can push freely european products on Georgian market, but on the other hand limits are enforced on the import of Georgian products inside the EU.

Hamlet Chipashvili, political analyst: “Association Agreement with the EU is very profitable for Europe because it can easily peddle its goods in our countries, while our products are submitted to a quota that Ukraine,for example, has already exhausted.”

This allegation is unfounded, as the share of export towards the EU in Georgia’s total exports throughout the years 2013-2016 has a clear trend of growth, and instead of imposing restrictions on products, the DCFTA (Deep and comprehensive Free Trade Area) sets a zero customs duty on 100% of food produces with an aim to encourage export in sight.

Lie N1: The EU instead of supporting export from Georgia, hawks its own products over the Eastern Partnership Countries.
Fact N1: In the period of 2013-2016, the share of export towards the EU in Georgia’s total exports is characterized by a growth indicator. With the scope of an outright indicator, Georgia has exported goods worth 607 204 000 US dollars to the European Union in 2013, while for 2016 this figure has decreased to 572 133 300 USD. However, in 2016, Georgia traded products with a smaller worth not only in the EU but in other unions as well, like CIS (Commonwealth of Independent States), which includes Azerbaijan, Belarus, Turkmenistan, Moldova, Russia, Armenia, Tajikistan, Uzbekistan, Ukraine, Kazakhstan and Kyrgyzstan. In 2013, Georgia exported 1 621 095 700 dollars worth of goods in CIS, while in 2016 this figure has fallen to 737 969 400 USD. This means that during the same period the export towards CIS has decreased by 54.5%, while trade with the EU shrank only by 5.8% (National Statistics office of Georgia).

Fact N2: According to the gathered data during the course of January-September 2017, Georgia exported 462 439 500 US dollars worth in the EU, compared with the same period of last year, we observe an increase of 18.9%. Fact N3: Among the 9 countries that make the most direct investments in Georgia 4 are EU members: United Kingdom, Netherlands, Luxembourg, Czech Republic. Fact N4: During the years 2013-2016, imports from the European Union have remained stable and did not have a significant growth.

According to the value of goods imported in Georgia from the EU, export of European goods in Georgia remained stable throughout 2013-2016 and no significant fluctuations were to be observed. From 2013 to 2016 this figure decreased by 2,3%, but in the first three quarters of the current year, the total increased by 2,2% compared with the same period of last year. (National Statistics office of Georgia)

FACT N5: Georgia and Ukraine enjoy a zero customs duty policy on import of goods in EU countries, except for 1 product.

There is no limit on the volume of Georgian good exported to the EU. Only a few products represent exceptions, Georgia initially has zero customs duty for these products within a certain quota, after the expiry of which the import tariff must be paid. This aforementioned rule does not set a limit on the amount of goods imported, it only determines the volume of product which is exempt from import taxes. More specifically, if the supplier decides to continue exporting its own products in the EU after the quota has been exhausted, ha can freely do so after the payment of the relevant fare, but even at this time the tariff includes a tax-break in of itself by design. The only product with no tariff concession is garlic. The supplier of garlic will have to pay a full fixed tariff. Also, the EU sets quotas on several products to protect their consumer from fraud. These allowances take into account the country’s production capacity and are approximately deduced from this number. After Georgia fulfills 70 percent of the quota, it must prove to the EU, that there is a genuine reason for exceeding the allocated limit. Such as, for example, an abundant harvest of the produce or an increase in the capacity of  production.

Regulatory mechanisms operating in Ukraine are very  similar. Nowadays, Ukraine uses up only a portion of the allowed quota, which is mainly due to the following reasons: Ukraine does not meet EU standards in either sanitation or phytosanitation, nor does it comply with food safety regulations, Ukraine itself produces insufficient volume of goods or prefers to export to other states, there is less demand on the EU market for these products or the country itself does not have proper trading partners.

Benefits of the EU-Georgia Association Agreement

Georgia trades with EU Countries without having to pay customs duties, the DCFTA sets a zero tariff on  100% of food categories, including the agricultural products that are of special interest to Georgian exporters: Wine, cheese, live goods, lamb/hogget and goat meat, bovine leather and fur, berries, fruits, vegetables and fruit juices.

Access to the EU market is also of interest to the  investors. For European investors Georgia is attractive because of the low cost of labor and electricity, as for non-European it is alluring due to the advantages that accompany the production of their Europe-oriented goods in Georgia, and then introducing them in the European Union market without any obstacles.

Prepared by Mariam Patsatsia
Student at the Myth Detector Laboratory