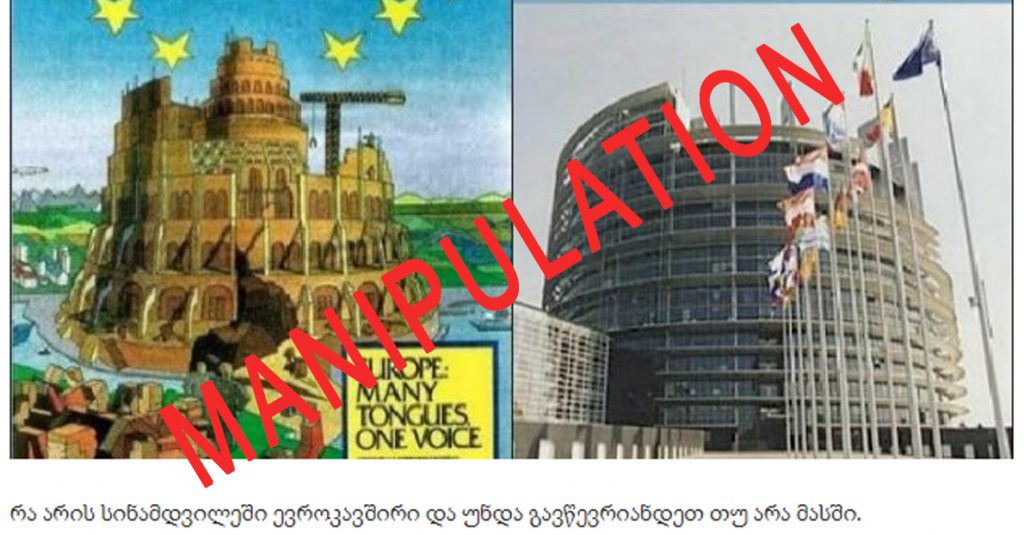 On August 18, 2019, TVM News published an article titled “What Truly is the EU and Should we Become its Members”. The article notes that media outlets and political elites propagate the EU membership. According to the author, the country, in case it becomes a member state of the EU, will remain only 25% free, as it should subject itself to the EU law which is equivalent to losing 75% of sovereignty. The author also mentions that Georgia will not witness additional economic benefit from the EU membership, meaning that Georgia should not thrive towards it. The article comes with an illustration showing the Tower of Babel and the EU Parliament building next to each other. The article was published on the website by Giorgi Prangishvili, however, the bottom of the article reads “Tornike Bedianashvili. Gorgasaliani”.

Facebook pages – TVM-news.TV,real and სტალინი (Stalin) shared the given article.

TVM.ge article voices its dissent towards Georgia potentially becoming an EU member state and through manipulative information on sovereignty and economic benefit tries to sow nihilism among its readers towards Georgia’s pro-European course.

Prerequisites for the EU Membership

First of all, aspiring EU members should fulfill main criteria. These criteria, known as “the Copenhagen criteria”, were formulated in Copenhagen in 1993. Aspiring countries should have:

Stability of institutions guaranteeing democracy, the rule of law, human rights, respect for and protection of minorities;

Functional market economy as well as the capacity to cope with competitive pressure and market forces within the Union;

Ability to take on the obligations of membership including adherence to the aims of political, economic and monetary union.

The candidate country status and the term of applying EU rules are subject to negotiations. These rules are divided into 35 spheres such as agriculture, environment, energy etc. Negotiations in each sphere progress independently from the progress in the other spheres. Also subject to negotiations are the financial agreements on the amount to be paid or received by the new member country from the budget and the transition agreements – when a new rule requires a gradual introduction and the new member is given time to adapt to it.

European Parliament is the only international organization whose members are elected via direct and universal ballot. It is a legislative body of the European Union and is directly elected every five years by the citizens of the 28 member countries of the EU to carry out their interests.

It is through strengthening the representative democracy that the Lisbon Treaty tries to bring the EU and its citizens closer. A clear example of an increase in participatory democracy is the Article 11.4 of the Treaty on European Union on citizen initiative envisaging a submission of any legal proposal the citizens deem to be necessary.

The message that the EU membership does not bring economic benefit and/or destroys country’s economy has been disseminated by pro-Kremlin actors for years and mostly aims to portray the lack of economic benefits from the economic integration of the Baltic and Eastern European countries with the European Union.

Professor of Brunel University London, Nauro Campos studied the economic benefit of the EU membership based on the 1980 and 2004 EU enlargement data. According to the study, despite country differences, data shows that the EU membership was beneficial under any circumstances except in the case of Greece, which author attributes to unexpectedness of opening an incompetent market and delayed structural reforms.

Diagrams below show GDP per capita (black line) and expected GDP per capita under the scenario when a country would not have become an EU member (red line). The blue dotted vertical line shows the date of becoming an EU member. As the diagrams show, Czech Republic, Estonia, Hungary, Latvia, Lithuania, and Slovenia benefitted more from the EU membership than they would have benefitted from not being a member. 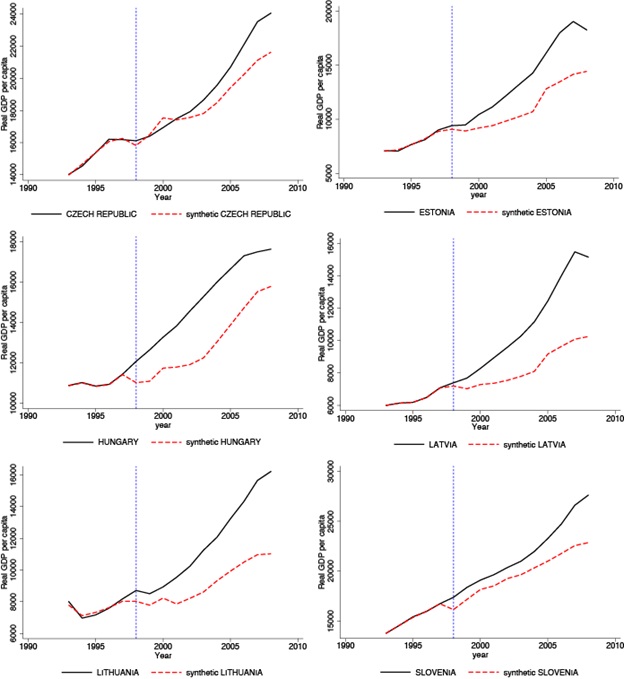 In 2017, Nana Devdariani, the Head of the Global Studies Center, and Gia Areshidze, a host at TV Obiektivi, were disseminating messages regarding the alleged non-democratic nature of the EU institutions. You can read about it in details in earlier publications of Myth Detector. Myths about Baltic countries’ economic collapse have also been disseminated.

Archive link to the TVM.ge article.