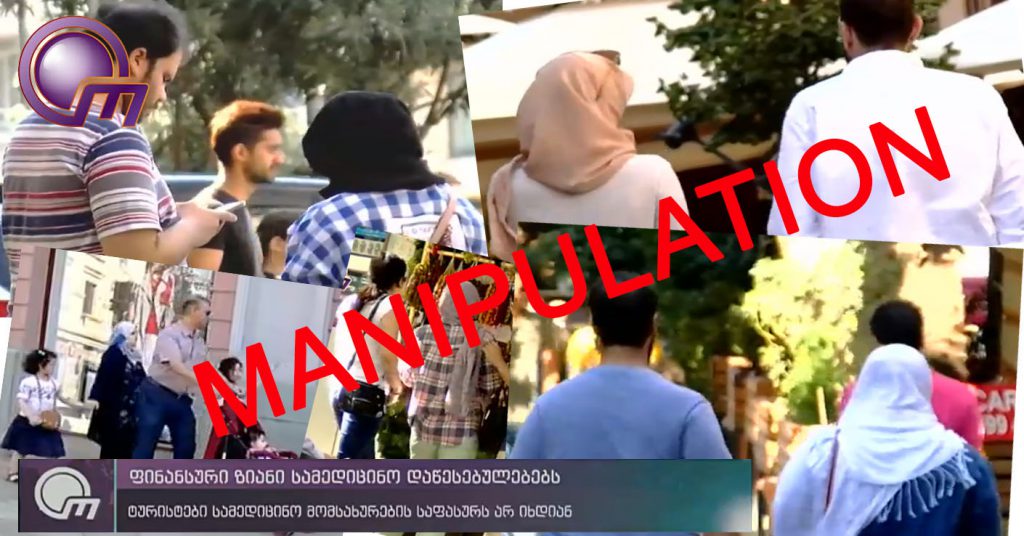 On October 4, a reportage was aired on TV Obiektivi’s news program, mentioning that tourists allegedly inflict serious financial damage on Georgian medical facilities. Without revealing any statistical data, journalist concluded that the tourists account for thousands of GEL in debt, as “tourists often refuse to pay treatment costs”.

The reportage comes with manipulative footages, showing images of women in Muslim headscarves in five different episodes, which creates perception that the tourists with Muslim identity account for the financial losses of the medical sector.

Obiektivi’s reportage is manipulative, as the state does not oblige the medical facilities to treat tourists free of charge. Private clinics determine the mechanisms and forms of reimbursement for the treatment individually, both for the citizens of Georgia and tourists.

According to the Resolution #77 on the Approval of the State Programs for Healthcare by the Government of Georgia, the beneficiaries of the State Healthcare Program are:

The beneficiaries include tourists who have to pay the costs of emergency service independently, however, these costs fall between GEL 50 – 100. Therefore, it is manipulative to blame the thousands of GEL in debt on tourists.

In addition, the Law of Georgia on the Legal Condition of Foreigners defines that the right to healthcare covers all foreigners due to its universal nature. However, the state does not oblige private clinics to provide free treatment to tourists. Private clinics independently create those leverages that ensure the payment of costs from the customers, both the citizens of Georgia and tourists, temporarily staying in Georgia. The procedure of covering the treatment costs is regulated by individual internal regulations of the clinics.