TV Obiektivi Host to Kremlin Journalists: “There was no Russian Occupation!” 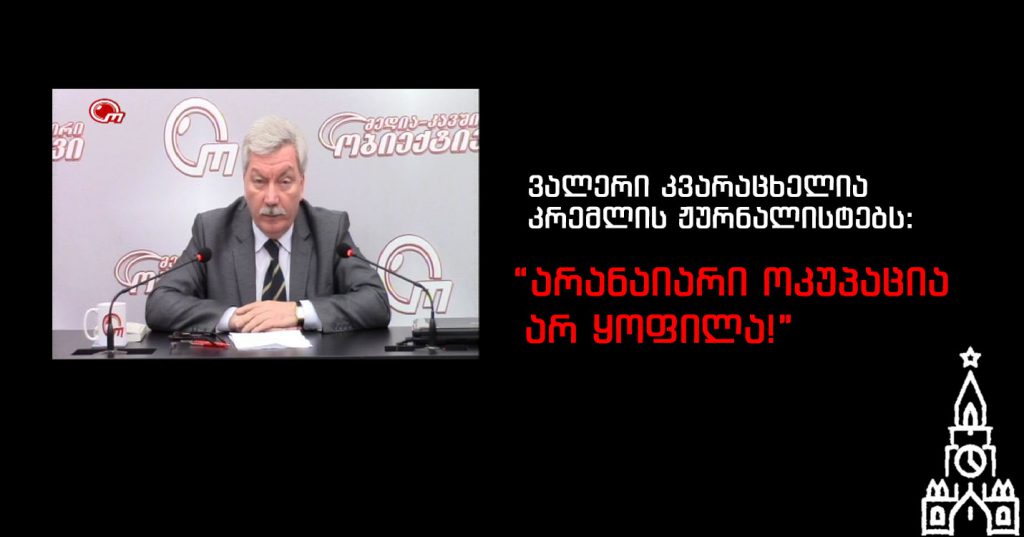 On September 6, during the International South Caucasus Media Forum, a Host of TV Obiektivi, Valeri Kvaratskhelia, Denied the Occupation of Georgia by Russia.

Myth Detector offers you several fragments of the audio and video recordings of the statements made by the TV Obiektivi host:

Valeri Kvaratskhelia, TV Obiektivi host: “When you are asked a question about occupation, why do not you answer straightly that there has been no such thing as occupation? There is not even a hint of occupation. From the point of view of jurisprudence, there is no occupation here. There are self-proclaimed republics and there is Russia, who recognized them. This is a completely different legal status. Occupation, on the other hand, is a radically different status. If Russia has occupied the territories we today refer to as occupied, then Americans, together with Europeans, occupied Kosovo.

Valeri Kvaratskhelia referred to Georgia as being occupied by the United States of America:

Valeri Kvaratskhelia, TV Obiektivi host: If we recognize that Abkhazia and Ossetia are occupied by Russia, then the remaining part of Georgia is occupied by Americans. They are everywhere. They rule Georgia. Do you think that Mr. President or Mr. Prime Minister decide anything? They are not allowed to decide anything. The Ambassador of the United States is here, and they are not allowed to do anything without his consent. This is the Georgian reality.”

The host of TV Obiektivi criticized the Georgian media for covering the Kremlin-funded event in the light of the occupation of Georgia and thanked the participants of the forum:

Valeri Kvaratskhelia, TV Obiektivi host: “Thank you for coming, thanks for holding this event, but how is it covered and shown to the Georgian people? As if some enemies came and conquered already occupied Georgia yet again. As if these people want to do evil to Georgians. I cannot believe that this is how they frame it. However, why does this happen? Because you do not have anything here, even a small group that would work on this. Not on you or Russia, but on establishing kind, warm, good relations between Russia and Georgia. It cannot be otherwise. However, they ruin everything, and entire Georgia listens to it. Nevertheless, as I have already mentioned, one-third of the population supports improving relations with Russia and becoming a member of the Eurasian Union.”

International South Caucasus Media Forum is being held in Vere Palace, on 4-7 September, 2018. The topic of this year’s Media Forum is “The Role of Media in Trust-Building in the Region”. The media forum is organized by the Russian Center of Political Sciences North-South (Север-Юг), press club Commonwealth (содружество) and Georgian, yet pro-Russian online newspaper Georgia & World. The event was  held with the support of Russia’s Presidential Fund. The event has caused protest manifestations.

Media Union Obieqtivi was established in August 2010. A co-founder of the company is Irma Inashvili, the current Secretary General of Alliance of Patriots of Georgia (APG); however, since 2014, she is not listed among the management of the channel. The political party office and television are in the same building. Obieqtivi broadcasts not only via television frequency, but also via radio frequency and the Internet. TV Channel pursues Turkophobic, xenophobic and homophobic editorial policy. In its fifth monitoring cycle report, the European Commission against Racism and Intolerance (ECRI), based on MDF’s study, recommended Georgia that the authorities “review their contracts with media outlets and cancel or not renew them in cases where media are known to engage in racist or homo-transphobic hate speech.” The report, among other outlets, referred to Obieqtivi TV.