TV Obiektivi Disseminates a Doctored Video and Disinformation about Vaccination 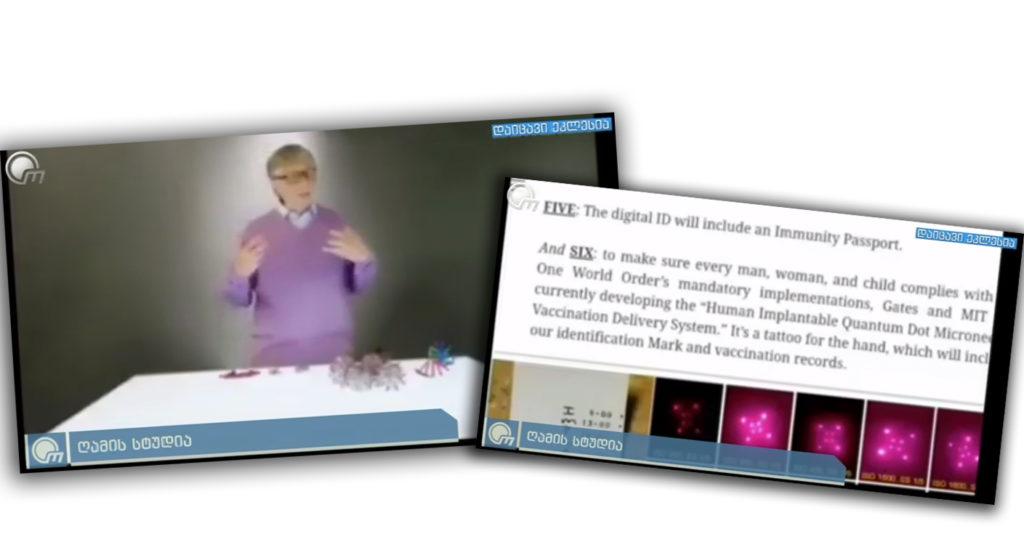 On August 26, 2020, Nodar Gogebashvili, an immunologist, spoke at “Night Studio” program of TV Obiektivi about a vaccination against COVID-19 and stated that the Oxford vaccine, funded by Bill Gates, is genetically modified and can alter human genes. TV Obiektivi also aired a video featuring Bill Gates dubbed in Georgian where Gates speaks about mandatory vaccinations of humans.

In the same program, following information has been voiced regarding the coronavirus:

Statements about COVID-19 and vaccination voiced at TV Obiektivi are not true and are disinformation. The video featuring Bill Gates that was played on air is doctored.

1. Coronavirus is not less dangerous than the influenza virus.

According to the World Health Organization (WHO), COVID-19 is much more dangerous than the seasonal flu virus – something that is evidenced by a high death toll of the virus, among other things. Considering that COVID-19 is a new and evolving virus, WHO states that determining the exact death rate is impossible at this point. However, the death rate was estimated to be 3.4% in March, and now it equals approximately 3.3%.

The death rate of a virus is calculated via a simple formula:

Infection-related deaths must be divided on the total number of cases and multiplied by 100 to get a percentage. This is how the current death rate of COVID-19 has been calculated.

As for the influenza virus, which usually presents itself as a seasonal virus, its death rate is significantly lower than that of the novel coronavirus – 0.1%. Therefore, it is groundless to claim that COVID-19 is less dangerous than the influenza virus.

Moreover, the progress of COVID-19 symptoms is significantly more severe than that of the seasonal flue virus. According to March 2020 data from the WHO, 80% of the coronavirus infections are mild or asymptomatic, 15% progress to a severe level, and 5% are critical and in need of artificial ventilation. The given indicator is lower in case of the flu virus.

2. The video featuring Bill Gates does not match the actual video.

The video, used by TV Obiektivi, where Bill Gates talks about the creation of the vaccine, is not real. Gates reviews several options of coronavirus vaccines, including the one created using RNA; however, the actual video does not mention modifying DNA or RNA shapes or using “quantum dot” vaccines. Moreover, Gates does not say in the video that seven billion people have to vaccinate, but rather that the vaccine has to reach seven billion people.

The segment between 00:15 and 01:13 of the video, disseminated by TV Obiektivi, does not exist in Gates’ video at all and is a fabrication. 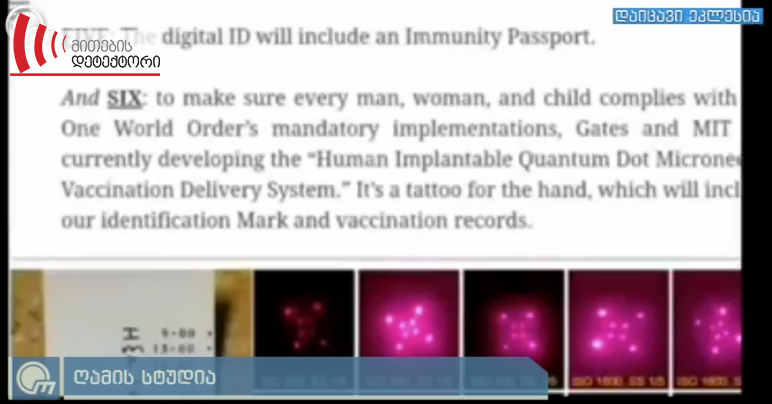 A claim that Bill Gates plans to insert chips in humans using a “quantum-dot microneedle” has also been voiced in the video. Kevin McHugh, one of the lead authors of the “quantum dot dye” research paper, said,

“The quantum dot dye technology is not a microchip or human-implantable capsule and to my knowledge there are no plans to use this for coronavirus.”

According to Oxford University webpage, chimpanzee adenovirus technology has been used to create the Oxford vaccine. This is a harmless, weakened adenovirus that usually causes cold in chimpanzees. The given vaccine was chosen as the most suitable vaccine technology for a SARS-CoV-2 vaccine as it has been shown to generate a strong immune response. It is also safe for children, elderly, and even for people with chronic health conditions such as diabetes. Chimpanzee adenovirus vaccine is a studied vaccine type that has been successfully used in thousands of subjects. Ebola, Hepatitis C, Malaria, and Tuberculosis vaccines all contain the chimpanzee adenovirus vectors.

As for the mechanism by which the Oxford vaccine works: as the creators of the Oxford vaccine explain, coronaviruses have club-shaped spikes on their outer coats that form a corona – Latin for crown – on the virus surface. Immune responses from other coronavirus studies suggest that these spikes are a good target for a vaccine. 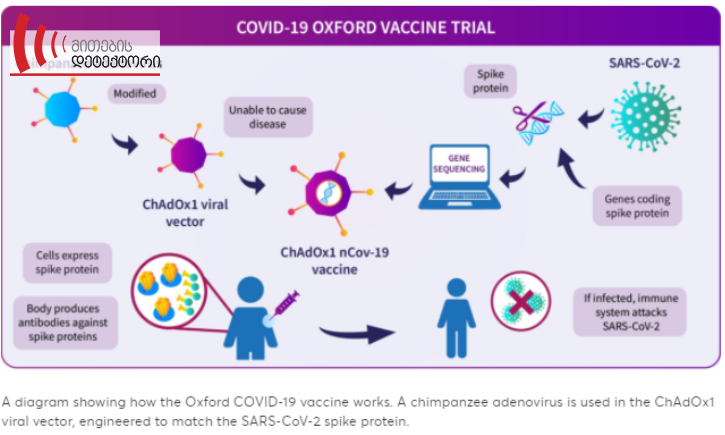 4. Bill Gates funds ten vaccine-producing companies. Apart from Bill and Melinda Gates Foundation, eight other companies are mentioned in the list of the Oxford vaccine funders.

Bill and Melinda Gates Foundation has allocated USD 350 million to fight the coronavirus, with USD 150 million from this amount transferred to a company called Gavi. Gavi provides support for manufacturing potential vaccines and later delivering them to low- and middle-income countries. According to the information on the company’s website, the price of one dose of vaccine would be 3 dollars at most. It is planned to produce 100 million doses of safe and effective COVID-19 vaccines and make them available in 92 countries until 2021.

Gavi is a vaccine alliance that vaccinates a lot of children around the world to protect them from various deadly infections.

Bill and Melinda Gates Foundation are also funding the Oxford vaccine group, but eight other companies are also in the list of donors of the given vaccine: Meningitis Research Foundation, Global Alliance for Vaccines and Immunisation, World Health Organisation etc. 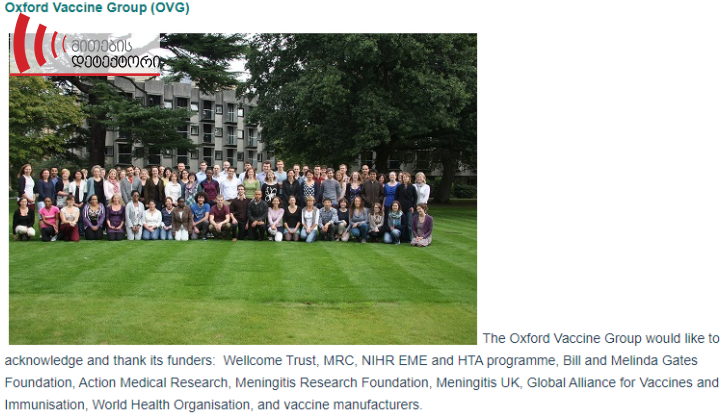 According to the United States Centers for Disease Control and Prevention (CDC), the clinical development of a vaccine is composed of several stages:

The coronavirus vaccine has to pass precisely the aforementioned three-stage process to be recognized by the WHO. Vaccines are tested for safety, immune response, and finally – efficiency, with each new stage reaching a larger group of volunteers. At the moment, vaccines from the United Kingdom, the United States, China, and Germany, such as Sinovac, vaccines of Wuhan and Beijing Institutes, vaccine of Oxford University, AstraZeneca, Moderna, NIH, BioNTech, Fosun Pharma, and Pfizer are at stage 3 of the clinical trials.

The vaccine that causes safety concerns has been developed in Russia. It was approved before it passed the stage 3 – the most large-scale one. Experts consider trials necessary at this stage. According to the WHO, the licensing of a vaccine includes mandatory procedures, including verifying and evaluating all safety and efficiency data retrieved after clinical trials – a requirement that stands for all potential vaccines. Russia has not published a detailed study about the trials that would provide evidence of efficiency of its vaccine.

Read more articles published by Myth Detector on the given issue: