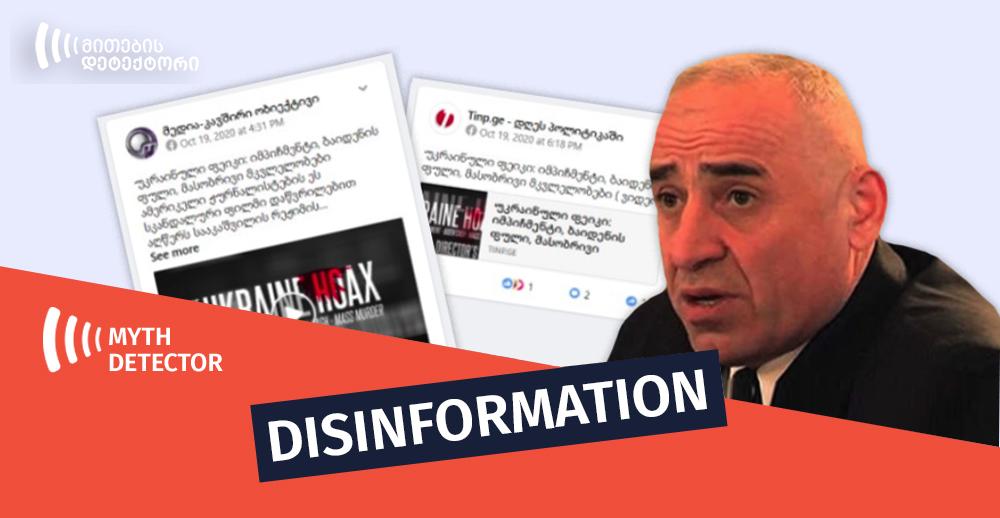 On October 17, TV Obiektivi aired a documentary titled “The Ukraine Hoax: Impeachment, Biden Cash, Mass Murder”. The documentary was shared by the Facebook page of the television, as well as a Facebook page tinp.ge on October 19. The caption of TV Obiektivi’s Facebook video post mentions that “the movie exposes the anti-Georgian and anti-Ukrainian actions of the Soros foundation and Joe Biden’s emissaries”. It also notes that, together with other actors of the Ukrainian Maidan events, the author of the movie also exposes Mikheil Saakashvili.

The movie aired by TV Obiektivi is manipulative and includes factual inaccuracies: 1. The movie uses fake testimonies of “Georgian snipers”; 2. The movie includes anti-American messages and reviews the involvement of the United States and George Soros in the Maidan events without any evidence. Moreover, an American TV channel OAN, where the documentary was initially aired, has been disseminating fake news, while its author has been questioned in the framework of the Mueller probe.

There is no evidence of the involvement of the West or George Soros in the Maidan events.

The movie is a conspiracy and includes various messages, including anti-American narratives and a claim that the 2014 Maidan events were organized by an American philanthropist George Soros, with the aid of the U.S. According to the author of the movie, besides participating in the Maidan events, Soros has supported the former President of Georgia, Mikheil Saakashvili, through his Open Society Foundations. These claims lack evidence, while the narrative about Georgie Soros’ “shadow governance” has been disseminated on numerous occasions both in Russian and English conspiracy editions.

There is no evidence confirming the participation of Georgian militaries in the Maidan events.

One of the segments of the documentary concerns the alleged participation of Georgian militaries in the Maidan events, with Tristan Tsitelashvili, who had been accused of spying, being a respondent in relation to this topic. The movie mentions that Georgian snipers were receiving orders from the third President of Georgia, Mikheil Saakashvili, and the Leader of the Georgian Legion, Mamuka Mamulashvili. In his 2017 interview with Myth Detector, Mamulashvili stated that he only crossed the border of Ukraine in April 2014, whereas the Maidan events took place in February 2014.

Russian propaganda has disseminated the disinformation for years that it was the snipers, supported by the West, not the Kremlin, who were shooting at the demonstrators gathered on Maidan square in February 2014. An Italian TV Matrix also broadcasted an “investigatory” documentary movie about this topic in November 2017. The documentary was called “Ukraine: The Hidden Truth” and it has also been subsequently disseminated by pro-Kremlin Russian media outlets and their Georgian satellites as well. The testimonies of the “Georgian snipers”, presented on the Italian TV channel, were not confirmed by judicial, medical, and ballistic expertise, as well as by the results of questioning of those who were wounded on February 20. 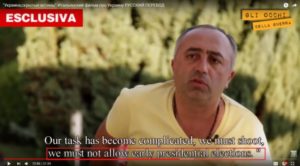 EUvsDisinfo, EU’s strategic communication platform, has also written on numerous occasions about the disinformation concerning the participation of Soros, Saakashvili, and the Georgian snipers in the 2014 Maidan events.

Who is the author of the documentary?

The given documentary, which was being disseminated in February 2020 with Georgian dubbing, is being re-activated by TV Obiektivi and used in the pre-election discourse.

The author of the documentary is Michael Caputo, an American political strategist and a lobbyist, who was an advisor to the electoral campaign of Donald Trump in 2016. It is noteworthy that the so-called Mueller probe was investigating Caputo’s ties with the Kremlin. According to the first volume of the report by the Mueller counsel, Caputo facilitated communication between Trump’s advisor, Roger Stone, and a Russian businessman Henry Oknyansky, who owned materials discrediting Hillary Clinton.

OAN has been disseminating fake news.

Initially, the documentary was aired on One America News (OAN) in January 2020. Other American editions refer to OAN as ultra-conservative and far-right. Moreover, the TV channel has been disseminating fake news and conspiracy theories on multiple occasions. For instance, OAN and the Kremlin’s Sputnik were disseminating identical fake news on Syria.

Dissemination of the documentary

The movie called The Ukraine Hoax: Impeachment, Biden Cash, Mass Murder was aired by TV Obiektivi on October 17 and shared by the Facebook page of the TV channel as well as a Facebook page „საქართველოს პატრიოტთა ალიანსის მაჟორიტარები“ (Majoritarian candidates of the Alliance of Patriots of Georgia) on October 19. The video has also been shared by a Facebook page „Tinp.ge – დღეს პოლიტიკაში“ (Tinp.ge – Today in politics), which often covers the activities of the Alliance of Patriots.

The description of the video mentions that “the movie has just been translated to Georgian and provides a lot of interesting information to those viewers who are interested”.

The documentary was shared by tvalsazrisi.ge in February 2020 with a caption “Scandal! Americans expose the alliance of Saakashvili, Soros, and Biden against Georgia and Ukraine”. In February, the article by tvalsazrisi.ge was also disseminated by Facebook pages „სტალინი“ (Stalin), „ჯაბა მუსელიანის ბლოგი“ (Jaba Museliani’s Blog), and “ბექა ვარდოსანიძე” (Beka Vardosanidze).