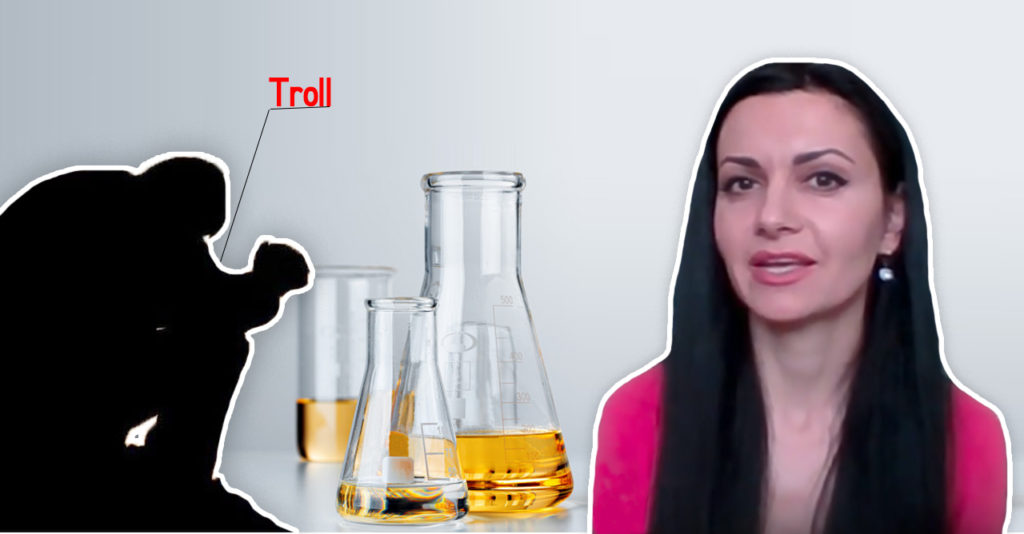 On December 1, Facebook user Lasha Modebadze published a post about the Tbilisi-based Lugar Lab. The Facebook profile hiding its identity claims that as part of the Hepatitis C Elimination Program, the U.S. Centers for Disease Control and Prevention (CDC) instructed Georgia to test medications and collect population’s genetic material in a biobank.

According to the post, along with foreigners, seven Georgian employees, including Paata Imnadze, the deputy head of the National Center for Disease Control and Public Health, were involved in the creation of a biological weapon at the Lugar Lab. The post is accompanied by the screenshots of the document in Georgian and English languages regarding the collection of samples in frames of the Hepatitis C Elimination Program. The document notes that the aim of the project is to store samples for future scientific work. The document also specifies the number of samples (plasma/serum samples, blood samples). 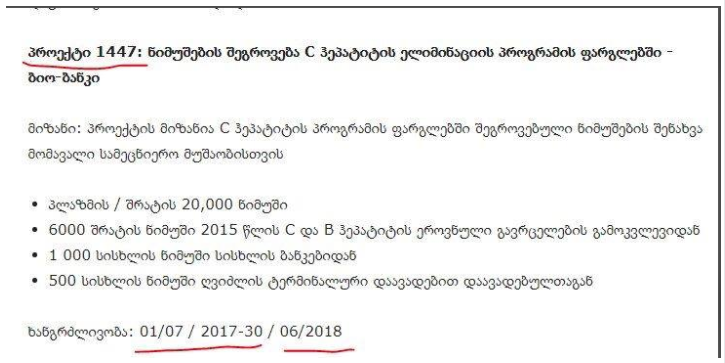 Furthermore, the post is also accompanied by a screenshot of the U.S. Air Force solicitation on supplying synovial tissue and RNA samples, which specifies that all samples shall be collected from Russia and must be Caucasian. It is worth noting that the term Caucasian is referred to white people. 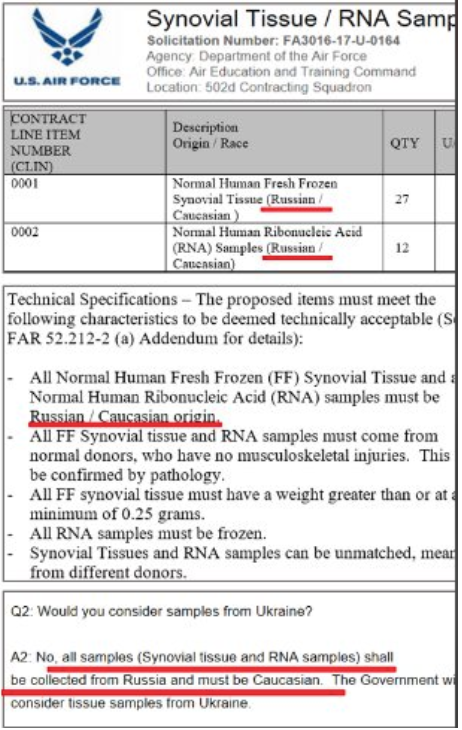 The screenshots accompanying the post have been taken from the materials published by Dilyana Gaytandzhieva, Kremlin and Hezbollah-affiliated Bulgarian journalist, apparently obtained following the cyberattack against the Lugar Lab on September 3, 2020. Few days before Gaytandzhieva’s article was published, the Ministry of Internal Affairs of Georgia announced on November 3 that “one of the foreign intelligence services” carried out a cyberattack against the Ministry of Health. It also noted that the attack aimed at illegal appropriation and use of medical records stored in the databases of the Ministry of Health and its structural units including the Lugar Center. Later, the obtained documents were uploaded on one of the foreign websites. Gaytandzhieva’s article also contains information about the collection of samples under the Hepatitis C Elimination Program. She manipulatively links the information with the creation of biological weapons. The screenshots accompanying the post are identical to the documents provided in this article. 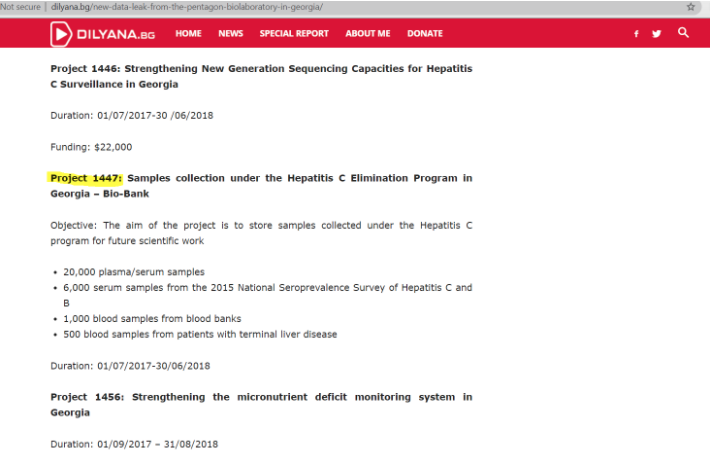 1. The claim as if blood samples were collected under the Hepatitis C Elimination Program without patients’ contest represent disinformation, because 6,014 out of 7,000 patients gave their consent for sample collection; 2. The claim as if the collected samples are used for creating biological weapons is conspiratorial, because collection of biological samples and their storage in a biobank for further scientific research is a widespread practice. 3. The American medications supplied under the Hepatitis C Elimination Program do not need testing at the Lugar Lab, because they are certified; further, they are registered in Russia and used in many countries of the world. 4. The document on the U.S. Air Force solicitation has nothing to do with Georgia and it was used by the Kremlin in 2017 for its propaganda purposes.

A nationally representative HCV seroprevalence survey was conducted at the initial stage of the Hepatitis C Virus (HCV) Elimination Program to establish baseline prevalence to measure progress towards elimination over time. Of 7,000 adults selected, 6,296 consented to participate and 6,014 provided blood specimen. The study found that HCV RNA prevalence was 5.4%. It was one of the important stages to plan the program. The article published in BMC Public Health journal notes that the datasets generated and analyzed during the study are not publicly available due to privacy restrictions. Participants were informed during the consent process that the data they provide would be available only to the Georgian Ministry of Labor, Health, and Social Affairs and the U.S. Centers for Disease Control and Prevention.

A biobank plays an important role in the development of modern medicine and treatment methods. Biological samples are an essential and important component for medical research. Biological materials collected during a specific research that are stored in a biobank may be used in frames of the same scientific project after several years for a long-term, future research. These data enable obtaining additional information about a disease, assessing whether a medical project is successful and analyzing the results. In addition, there are frequent cases of data sharing that makes the research more effective and rapid. In case of the United Kingdom, the causes of various diseases are analyzed just through the biobank containing a large number of samples. It is worth noting that along with biological materials, a biobank also stores interesting medical information about their owners (age, sex, chronic diseases, etc.).

Considering the fact that biological materials (cells, blood, tissue, DNA, etc.) are necessary for medical research, various research organizations, institutes and universities frequently make their resources available to medical research. For example, the EuroBioBank network established in 2001 unites 16 European organizations. The Bavarian Red Cross (BRK) Blood Donor Service offers a unique and innovative resource for biomarker research and maintains a unique collection of over 3 million blood samples. It is worth noting that this organization makes its resources available to medical research after a research project and its goals are reviewed by the ethical review board.

There are a lot of biobanks worldwide storing a large amount of biological materials. For example, the Biobank Graz of the Medical University of Graz, Austria stores over 19 million human derived samples. Over 1 million samples are storedin one of the largest biobanks of the United States. Biobanks are operating globally. According to one of the websites, almost 100 biobanks are registeredin Europe.

The author of the post claims without elaborating details that medications are tested on Georgian citizens under the Hepatitis C Elimination Program. The allegations that various medications for Hepatitis C treatment were tested on Georgians at the Lugar Lab were first voiced by Georgia’s ex-security chief, Igor Giorgadze in 2018. Echoing Giorgadze, Russian President Vladimir Putin said that the experiments on humans carried out by the Lugar Lab were alarming. Sovaldi and Harvoni medications named by them were bestowed to Georgia by Gilead pharmaceutical company for free under the five-year national Hepatitis C Elimination Program.

It is worth noting that both medications have European and American quality verification documents. Moreover, Sovaldi has been registered by the Ministry of Health in Russia since 2016. In 2019, the Russian government included Sovaldi in the list of vital and essential medications.

“These medications have caused drastic changes in the field of hepatitis C treatment throughout the world and they ensure the recovery of over 95% patients from this disease. These drugs are absolutely safe and they have no serious side effects. They are successfully used under Georgia’s Hepatitis C Elimination Program and no side effects have been reported so far.”

The post is accompanied by a screenshot of the U.S. Air Force solicitation on supplying synovial tissue and RNA samples, which specifies that all samples shall be collected from Russia and must be Caucasian. It is worth noting that the term Caucasian is referred to white people. The document is dated 2017 and it has nothing to do with Georgia.

Pro-Kremlin TV channel RT wrote about the U.S. solicitation back in July 2017. The title of the article mentions “Weaponizing viruses” and the text itself casts doubts on collection of biological materials.

Capt. Beau Downey of the U.S. Air Force told Defense News that the Center for Advanced Molecular Detection was conducting research to identify various biomarkers associated with injury. It required two sets of sample groups — one for disease testing and the other as a control group. Downey explained that the first group of samples, obtained from a U.S.-based firm, was sourced from individuals of Russian descent. “However, to continue the research, similar samples were required,” he added.

The issue again emerged on October 30, 2017, when speaking at a conference with the Civil Society and Human Rights Development Council, President Putin suggested that foreigners were collecting biomaterials across Russia “purposefully and professionally.” Echoing Putin’s allegations, Gennady Onishchenko of the Duma’s committee on education and science noted that the collection of Russian fluids, organs and tissues is “nothing other than proof that the United States has not ceased its offensive military program.”

Facebook account Lasha Modebadze is apparently a fake profile, which previously was an admin of Facebook group კორონა მაფია (Corona Mafia) and presently administers and moderates another group კორონამაფია და საქართველო როგორც საექსპერიმენტო ქვეყანა (Corona mafia and Georgia as an experimental country). This latter frequently spreads Russian-language conspiracy theories about the coronavirus, also shares News Front Georgia’s materials. Lasha Modebadze spread disinformation against the Lugar Lab in October as well. The same profile also spread disinformation about the South Caucasus Field Epidemiology and Laboratory Training Program, as well as a conspiracy theory as if the pandemic was planned in advance.

About the Lugar Lab

Richard Lugar Center for Public Health Research, popularly known as Lugar Lab, that plays an important role in COVID-19 diagnosis, has long been targeted by the Russian government and Kremlin-affiliated actors in Georgia. They are deliberately trying to link a threat of bio-sabotage to the Lugar Lab, spreading various conspiracy theories and fake news for years.

Bulgarian journalist Dilyana Gaytandzhieva, who targets the Lugar Lab and frequently appears on Russian Defense Ministry-owned TV channel, Zvezda, is one of such sources.

See detailed information about leakage of documents from the Lugar Lab and the Ministry of Health in Myth Detector’s articles: 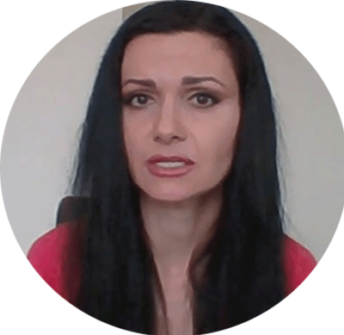