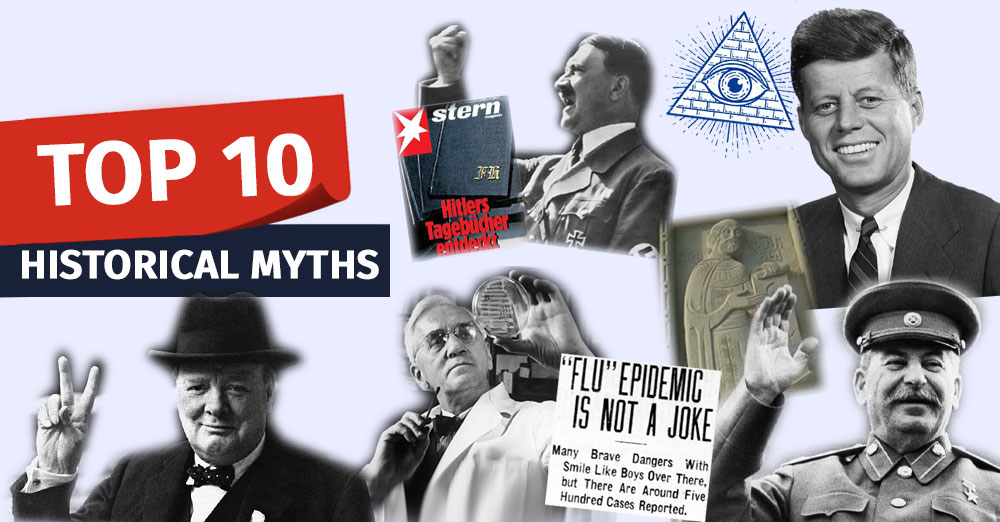 “Myth Detector” presents the top 10 historical myths that were spread by various sources on both social and traditional media in 2021:

Facebook users cited a quote from John Kennedy, the 35th president of the United States, noting that he allegedly spoke about a worldwide conspiracy directed against the United States that used covert means to expand its spheres of influence. The Facebook posts asserted that Kennedy was talking about Masons and the Illuminati, who killed Kennedy days after making that statement.

Facts:  The fragments of the quote are taken from Kennedy’s April 27, 1961 address called “President and Press.” Nonetheless, Kennedy referred to the threat coming from the Soviet Union and not from the Masons and Illuminati. The claim that Kennedy was assassinated days after the speech is false, as he was killed on November 22, 1963.

A Facebook user published a post claiming that in his last days, Adolf Hitler had been highlighting Stalin’s superiority in his diaries. In addition, the post noted that Stalin’s monuments can be found in a number of Asian and post-Soviet cities, as well as many European cities and even the United States.

Facts: Hitler’s diaries are fabricated. It was published in 1981-1983, but its falsity was confirmed later by various arguments. As for the monuments, they were taken down in most of the cities, while the others transformed them in a satirical way.

For more:  What did Hitler Write about Stalin in “Bunker Diaries” and where are the Monuments of Stalin Located?

A picture of the former Prime Minister of the United Kingdom, Anthony Eden, was shared in the Facebook Group “Freedom.” The photo of Eden was accompanied by his alleged quote directed towards Joseph Stalin, claiming that after Stalin’s death, Edens labelled politics as no longer interesting and resigned.

Facts: The aforementioned quote does not belong to Anthony Edens. No open-source contains information about the Prime Minister of the United Kingdom ever making a statement of similar content. The real reason for Eden’s resignation was his deteriorating health and his unsuccessful role during the Suez Crisis.

For more: Why did Anthony Eden Resign and What did he Say about Joseph Stalin?

For more: Did Alexander Fleming and His Father Save Winston Churchill Twice?

Facebook page Politicano that is linked to Yevgeny Primakov Russian-Georgian Public Center wrote that Walter Hallstein, the first President of the European Commission, was an active member of various Nazi organizations, in 1942-1944, served as a lieutenant in the Nazi artillery division, Wehrmacht and Charles de Gaulle forced Hallstein to resign as the Chairman of the European Commission in 1967, because he hated former Nazis.

Facts: Hallstein had never been a member of the Nazi party. Walter Hallstein really was a member of several Nazi professional organizations (including the National Socialist Teachers League, the National Socialist Association of Legal Professionals and the National Socialist German Lecturers League). The policy of Gleichschaltung (“coordination”), the Nazi seizure of control, led to the process of Nazification of most civic organizations and institutions. Hallstein resigned following the so-called Empty Chair Crisis that erupted in 1965. The confrontation between him and de Gaulle was not related to Holstein’s “Nazism” but to his agricultural market policy. It is noteworthy that Holstein was not fired, his presidency ended in 1966 and he remained until the election his successor.

For more: Why did Charles de Gaulle Confront Walter Hallstein and why does Politicano Link EU to Nazism?

The article by Krmelin-owned Sputnik Ossetia, which concerned the 1760th anniversary of the founding of Tskhinvali asserted that the city of Tskhinvali was founded around 262-265 by King Aspagur, a descendent of the Iranian dynasty.

Facts: Aspagur was the descendent of the Georgian dynasty of Parnavazids. Although marriages between the kings of Kartli and the Achaemenid and later Sasanian royal families of Iran were frequent, the Parnavazid royal dynasty is still considered Georgian. This fact is omitted in the article by Sputnik Ossetia to cover the Georgian trace. King Aspagur was the last Parnavazid king of Kartli. Since he had no heir, his daughter Abeshuru married Mirian, the 7-year-old son of Khosrov, king of Persia. The latter later became the first Khosrovid king of Kartli and started the Khosrovid dynasty. Asphagur is also considered to the founder of the city of Ujarma.

For more: “Sputnik Ossetia” Claims the Georgian King was of Iranian Descent

Sputnik-Ossetia published a fragment of a radio program concerning the independence of the so-called South Ossetia. The program included an opinion of a candidate of historical sciences, Teimuraz Tadtaev. He claimed that the so-called South Ossetia joined the Russian Empire before Georgia, and later, in 1917, when it decided to stay in Russia during the revolutionary period, Georgia carried out a genocide.

Facts: In fact, today’s Tskhinvali region territory joined Russia during the annexation of the Kingdom of Kartli-Kakheti; in 1918-1921, the Democratic Republic of Georgia suppressed several rebellions, including the one organized by Ossetians, but the implemented measures did not target the ethnic group.

For more: Annexation of Kartli-Kakheti or a Consequence of the 1917 Revolution – When did Tskhinvali Region Join Russia?

Georgia and World, a pro-Kremlin online media outlet, published an article by Davit Mkheidze claiming that the Great Schism of 1054 (the major disagreement between Catholic and Orthodox Christians) was caused by the fact that marriage between relatives were allowed by the Catholic Church– something strongly opposed by Orthodox Christians. Mkheidze also claimed that some “super democratic” Western countries have even legalized incest.

Facts: The Roman Catholic Church was actively fighting against incest or marriage between blood relatives. The Schism was caused by a lot of other reasons, including theological, political and historical ones; however, the issue of marriage between blood relatives was not listed among them. Incest is prohibited by law in the majority of European countries and the United States. Meanwhile, incest between adults is not criminalized in Russia.

For more: Did Incest Become the Reason for Schism and Is Incest Criminalized in Russia?

Pro-Kremlin outlet News Front published an article claiming that the Spanish flu that began in 1918 was linked to the contemporary Rockefeller Institute for Medical Research, particularly, to Frederick L. Gates, who back then carried out bacterial meningitis vaccination in soldiers. The author claims that the aforesaid Frederick L. Gates was a grandfather of present-day American businessman and philanthropist Bill Gates.

For more: What did Bill Gates’ grandfather do during the Spanish Flu?

For more:  False Claim as if 1918 Spanish Flu was caused by Vaccines