Three Lies from Sputnik-Ossetia On The Geneva International Discussions 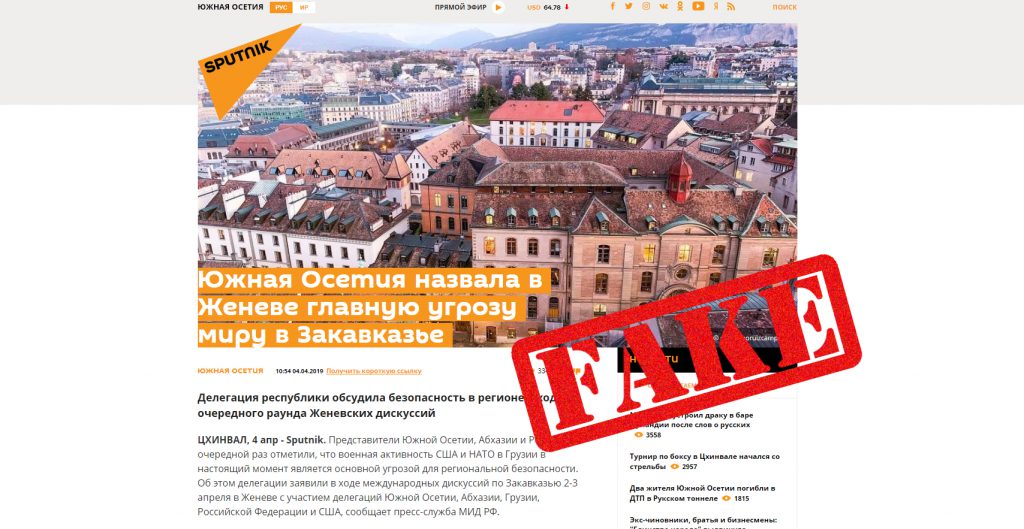 On April 4, 2019, an online edition Sputnik-Ossetia published an article entitled “South Ossetia Named the Biggest Threat to the Peace of South Caucasus in Geneva.” The article is about the 47th round of the Geneva International Discussions held on April 2-3. Sputnik-Ossetia writes about the Geneva Discussions that they are held in accordance with Medvedev-Sarkozy Agreement, which they allegedly reached after Georgia’s military aggression against the so-called South Ossetia in August 2008. The edition bases its information on the press services of the Ministry of Foreign Affairs of the Russian Federation, and states that the counter-productive position of the Georgian side prevented a joint statement on non-use of force and links the importance of this statement to the US and NATO military activities in Georgia. In addition, according to Sputnik, the majority of participants admitted that the situation is stable on the so-called borders between Abkhazia, South Ossetia and Georgia.

Lie #1: The Geneva Discussions have been held in accordance with the Medvedev-Sarkozy Agreement, which was allegedly reached after Georgia’s military aggression against the so-called South Ossetia in August 2008.

The truth: International community declared Russia as an aggressor in August 2008 events. It should be noted that the EU, UN and OSCE are mediators in Geneva Discussions.

Following Russia’s aggression against Georgia, on August 12, 2008, the Six-Point Agreement on the ceasefire was developed through the mediation of the EU and signed by Nicolas Sarkozy, then President of France – which served its term as the President of the EU Council. Russian side signed the Agreement on August 16. Russia still does not fulfill its obligations under the Ceasefire Agreement, including those avoiding the use of force and hostilities. Unlike Georgian Armed Forces, the Russian Armed Forces have not returned to the line of status quo from before the commencement of military actions.

Lie #2: The counter-productive position of the Georgian side prevented a joint statement on non-use of force and the importance of this statement is linked to the US and NATO military activities in Georgia.

The truth: The obligation of non-use of force has become an actual issue after Russia’s military aggression towards Georgia in August 2008. It is also reflected in the Six Point Agreement signed by President Medvedev. However, Russia refuses to make a statement about the non-use of force. Georgia has made statements on the non-use of force both at the executive and legislative levels.

Within the Geneva International Discussions, Georgia has been insisting for more than 10 years that Russia make a statement about the non-use of force. Russia is also obliged to do so in the framework of the Six Point Agreement signed by President Medvedev. However, Russia refuses to comment on the fact, as it is “not aside of the conflict”.

It is noteworthy that the Russian Federation itself creates a major threat to the stability of the region by neglecting the obligations taken under the Ceasefire Agreement from August 12, 2008 and by militarization and occupation of Georgian territories.

Lie#3. The situation is stable on the so-called borders between Abkhazia, South Ossetia and Georgia.

The truth: One can observe the “borderisation process” around the dividing line between the occupied territories and Georgia, as well as murders and kidnapping of citizens of Georgia – the events that are also discussed in the framework of the Geneva Discussions. It is noteworthy that in the round 47 of regular discussions the co-chairs (European Union, OSCE and the United Nations) and participants from the US expressed concerns over the death of captivated Irakli Kvaratskhelia at the Russian military base.

After August 12, 2008 Agreement, the occupation forces of the Russian Federation and the puppet regimes killed 43, and kidnapped and detained up to 3,000 Georgian citizens; 32 villages and the Baku-Supsa Oil Pipeline fell victims to the so-called “borderisation“ process – a continued process of occupation.

It is noteworthy that in 2018, the European Union (one of the co-chairs) adopted a Resolution on Occupied Territories of Georgia 10 Years after the Russian Attack, where the EU “Calls on the Russian Federation to cease further borderisation of the [administrative boundary line], which it is seeking to achieve by installing barbed wire fences and other artificial barriers; calls also for an end to the encroachment into territory controlled by the Georgian Government and further extension of the [administrative boundary line], intentionally hindering people-to-people contact and isolating the population of both occupied regions; ”