The strategy of Pro-Kremlin Violent Groups: Burning of the Western Symbolic should be Normalized! 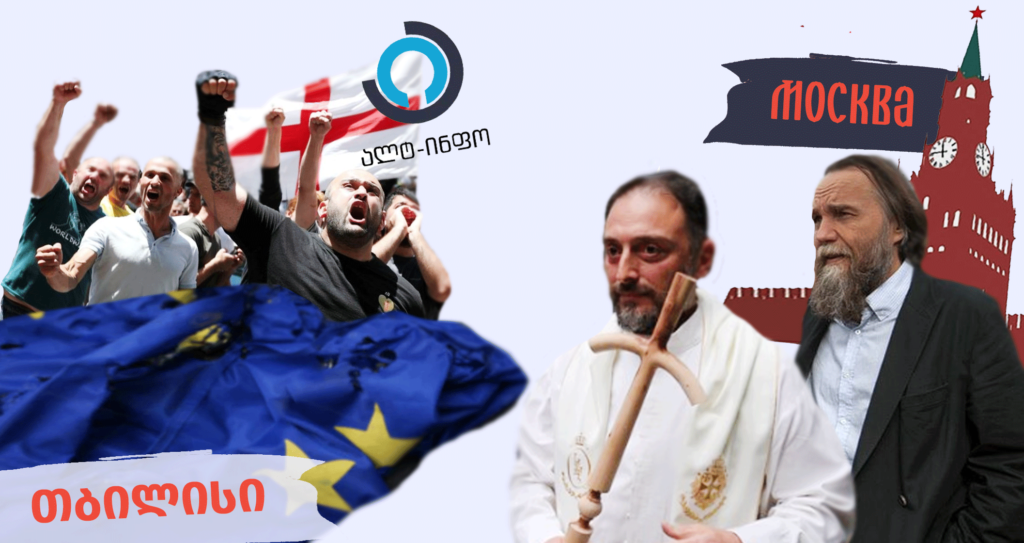 Anti-Western narratives were predominantly nurtured by the Levan Vasadze-linked Media Outlet Alt-Info. In addition to actively participating in organizing the anti-Pride demonstrations of July 5th, the hosts of Alt-Info were actively spreading controversial messages aimed at mobilizing violent groups.

After July 5th, the violent rhetoric of Alt-Info became more assertive and was aimed at:

The hosts of Alt-Info, who openly stated that aggression had to become the standard for the political and ideological battle, emphasized the necessity to establish a full-fledged TV channel and empty the informational environment from the media outlets having a critical stance towards the current government. The violent threats emanated from the anti-Western violent groups revealed the following strategic aims:

The US and the EU are no longer untouchable

Shota Martinenko: “Similar to how they were scorning our sanctities for decades, we will also demonstratively do the same. This will be witnessed by the whole world, that Georgia has changed its political consciousness and neither the European Union nor the US and their symbols are untouchable in our country.”

Shota Martinenko: “The West is the main force trying to normalize this impurity here. The West propagates homosexuality and imposes demands to demolish the faith, culture, identity and the free will of the Georgian people. Therefore, the wrath, hatred of our people should be primarily directed against the US and the EU, which are the masterminds behind this impurity in Georgia.”

Shota Martinenko: “We will not win unless we direct our responsive attack to the West – the main initiator seeking to kill our national identity and weaken the church. The EU and the US should suffer an attack on their reputation.”

Giorgi Kardava: “The EU office is quite near, and so is the US embassy. Be aware that in case of the removal of the St. Nino cross, bad things will happen. The process will become inevitable, and God may be our witness, we did not plan this.”

Zura Makharadze: “Not only will the EU flag be burned tomorrow, but also we will explain to Nata Peradze what it means to behave in such a way with a religious symbol. Afterwards, we will head to the embassies, which are the main actors behind this… The events of Monday and Tuesday will be child’s play…”

Burning of Western symbolic (flags) should be normalized

Shota Martinenko: “The real inception for this perversion is the liberal West; therefore, the main attack should be initiated on them. We have to strike their authority because they are attacking our national identity and our Christianity. The act of burning their flag has to become normalized. This was inconceivable a year ago, but it happened this year, and tomorrow onwards, this has to become an everyday practice.”

Shota Martinenko: “The burning of the EU flag is an event of a special significance… This has to be normalized and transformed into a fighting mechanism. This practice has to be established.”

Giorgi Kardava: “With regards to the EU and the US, to tell the truth, they are the ones responsible for this provocation, as they are the main actors behind this altercation. Tomorrow’s events will turn the 30-year-long process of European Integration upside down, and we will not hold back. Don’t even think that we are afraid of something; we will do whatever it takes.”

Zura Makharadze: “There will be an unprecedented unity of the Georgian nation, and we will show this unity to the whole diplomatic corps, ‘vice-regents’ from outside, to the colonial administration and their lackeys in the government and the opposition that the conservative drive will not perish in one day, it will conserve and transform into a political movement.”

Liberalism will be replaced with Christian-conservativism, and the state will be governed together with the ‘mother church’

Zura Makharadze: “We will get to the point where Georgia will have a national government, and liberalism will be replaced with a Christian-conservative governance.”

Media as a tool for Political Battle and threats about emptying the Georgian informational environment from the media outlets not controlled by the government.

The representatives of the violent groups name the creation of a full-fledged Media Channel as a precondition for transforming into a political movement and thus emphasize the importance of removing the non-conforming media outlets (“Formula,” “Mtavari” and “TV Pirveli”) from the Georgian informational space.

Giorgi Kardava: “If we have at least one full-fledged, same calibre media among these hyenas, then we will end them. The whole Georgia watches Alt-Info! Everyone! And we will most certainly do this! Our next step is to create a media channel, and none of their censorships will hold us back.”

The hosts of Alt-info, who at the same time were organizing the violent demonstrations on July 5th, were justifying the violence against journalists using the wrath of people, which, according to them, cannot be controlled. The hosts themselves were targeting media platforms (“Formula,” “Mtavari,” and “TV Pirveli” not regulated by the government.

Giorgi Kardava: “Let it be known that starting today, every journalist that works under the channels linked with the United National Movement (“Formula,” ”Mtavari” and “TV Pirveli”) are direct enemies of our Georgia! Enemies of our country!”

Zura Makharadze: “You still don’t realize how much aggression did they [journalists] invoke into people. If a similar altercation happened, no one would be able to stop them. People despise you, so make your brains work…”

In contrast to the claim of Alt-Info hosts that they were unable to control the furious crowd, alternative footage demonstrates how Makharadze was negotiating with the chief of police division Vazha Siradze during the counter rally directed against the silent protest of July 6th. Makharadze asks Siradze to lower the LGBT flag hoisted in front of the St. Nino cross. After Siradze answers that he cannot approach the protesters, Makharadze promises to control the crowd during his absence.

“How much time do you need? I guarantee you, tell me how much time you need to get there… I can assure you that nothing will happen here for 10 minutes…”

The host of Alt-Info personally targeted and verbally insulted Irakli Absnadze, the journalist of Georgian Public Broadcaster who protested the violence against journalists and criticized the inaction of the authorities.

Giorgi Kardava: “This worthless f*got [Irakli Absnadze] is financed from our money and works for the Public Broadcaster! So kick him out from there, so he can go and work for “TV Pirveli” or “Formula.” But we will reach you there too because every media outlet operates using the stolen money.”

The host of Alt-Info explicitly stated that if they came to power, they would prevent the whole media system from open broadcasting.

Shota Martinenko: “Once we gain power, you won’t stand a chance. We will completely remove your media system from broadcasting. We will cancel it.”

Aggression as a Weapon for Political and Ideological Battle

The hosts of Alt-info have proclaimed several times that aggression is a necessary weapon for an ideological and political fight; therefore, using violence should become standard practice.

Shota Martinenko: “Aggression is a necessary weapon for the political and ideological battles. No one has ever won anything without it, and now they are telling us that we speak aggressively. This is a necessary condition. Yes, we have to make it a standard practice. Aggression should be directed against every ‘liberast’ in the mundane life, you may even call it psychological bullying, but it should be a positive thing. This has to be a method of a political fight in everyday life.”

TV Alt-Info is linked with the political party of Levan Vasadze, “Unity, Essence, Hope.” After Facebook removed all Alt-Info-related accounts due to the coordinated unauthentic actions, it obtained a broadcasting license and started broadcasting in 2021. Shota Martinenko is recorded as its director, who owns 50% of its shares, while another 50% is owned by Tsiala Morgoshia.

Alt-Info is associated with a non-profit (non-commercial) legal entity, “Alternative for Georgia,” which was registered on January 30, 2019. According to the National Agency of Public Registry, board members of the organization include Konstantine Morgoshia, Zurab Makharadze, Shota Martinenko, Irakli Kizilashvili and dual Russian-Georgian citizen Giorgi Kardava.

Vasadze is the representative of the Christian-evangelist organization “World Congress of Families” (WCF) to Georgia. Using the moral obligation to protect “natural families” as a façade, the organization fights against the spread of LGBTQ+ rights. WCF is also connected with a Russian oligarch Konstantin Malofeev sanctioned for the events in Crimea and also with Aleksey Komov – the official representative of the WCF to Russia and is closely linked with the founder of the “Eurasia Movement” Aleksandr Dugin. Vasadze himself has close ties with Dugin, who is very often invited to “Alt-Info.”

Vasadze-linked groups and Alt-Info hosts were actively involved in the violent demonstrations against the Tbilisi Pride in Tbilisi 2021. Dugin himself was cheering the developed violent events on social media.

In 2019, Vasadze initiated to develop a “public legion,” which would patrol the city during the planned demonstrations.