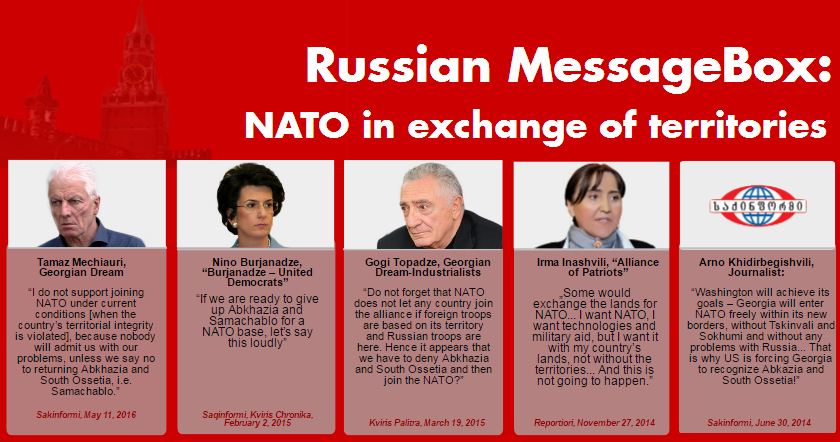 The statement made by Georgian Dream lawmaker, Tamaz Mechiauri, according to which Georgia will have to give up its territorial integrity in exchange of NATO membership, is groundless. Similar statements were made at different times by some political forces and media platforms with pro-Russian orientation and this message has even turned into a certain message box (see infographics).

The groundlessness of this message is confirmed by the following circumstances:

1. Article 5 of the North Atlantic Treaty does not demand any country to give up its territory.

Tamaz Mechiauri supposes that in the absence of Russian military bases in the occupied territories, Georgia’s NATO membership will lead to a military conflict between Russia and NATO; he cites Article 5 of the North Atlantic Treaty as a precondition for it. The lawmaker also claims that removing similar barriers and joining NATO will be made possible at the expense of giving up Georgian territories.

The North Atlantic Treaty, especially its Article 5, does not mention anywhere that the countries aspiring to join the alliance should definitely have their territorial problems settled. Article 5 of the North Atlantic Treaty defines the form of collective self-defence: “The Parties agree that an armed attack against one or more of them in Europe or North America shall be considered an attack against them all.” In addition, during the entire period of NATO-Georgia relations, the occupied territories have never been perceived as a hindrance to NATO membership.

Germany is an example to prove that similar notions are wrong. The Federal Republic of Germany joined the alliance in 1955, when Eastern Germany still remained under occupation. Germany’s accession to NATO did not lead to the war between NATO and the Soviet Union.

Russia’s open aggression and its support expressed to separate groups is confirmed by armed conflicts in Tskhinvali Region (1990, 2004), Abkhaz war (1992-1993) and Russian-Georgian war in August, 2008, when direct intervention was carried out. Georgia’s two regions – Abkhazia and Samachablo remain occupied by Russia that is also recognized by the international community.

The armed conflict in Abkhazia resulted in ethnic cleansing of Georgians; over 300 000 people became internally displaced. The Georgian language is still restricted in the occupied territories; cultural and religious monuments are being damaged.

NATO and Georgia established relations in 1994, when Abkhazia and Tskhinvali Region were already beyond Tbilisi’s jurisdiction. Nevertheless, territorial problems have never hampered the process of Georgia’s integration into the North Atlantic Treaty Organization. At the summit in Bucharest in 2008 NATO leaders decided that Georgia will become a member of the alliance. Settlement of territorial problems has never been named as a precondition for the membership. Instead, the country has to further develop its democracy and meet NATO standards to join the alliance.

3. Only Russia, Nicaragua, Venezuela and Nauru recognize the independence of occupied Abkhazia and South Ossetia; the West does not recognize Georgia’s two breakaway regions

Russia is the only force, which has revised Georgia’s internationally recognized borders. On August 26, 2008 Moscow recognized Abkhazia and South Ossetia as independent states (decrees No 1260 and No 1261issued by the President of Russia). As far as the NATO member states are concerned, they recognize Georgia’s territorial integrity and strongly support non-recognition policy.

Besides Russia, three other countries – Nicaragua, Venezuela and Nauru have also recognized Abkhazia and South Ossetia. Initially, Tuvalu and Vanuatu also recognized Georgia’s breakaway regions but later they retracted their recognition. It cost Russia USD 3.25 billion to gain recognition from these countries with USD 2.2 billion paid to Venezuela.