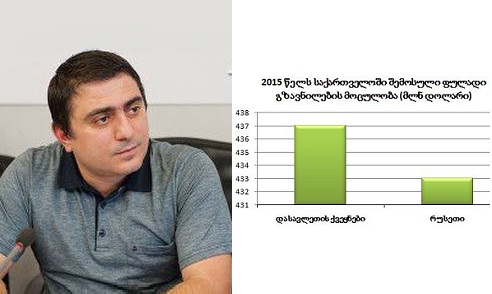 The European Union is Georgia’s main trade partner. The data from the National Statistics Office of Georgia demonstrates that Georgia’s overall trade turnover with EU member states exceeded 3 billion US Dollarsin 2015, which is an increase of 6% compared to 2014. Georgian businesses received 646 million USD of income by exporting goods and services tothe EU i.e. 29% of Georgia’s overall export income. Georgian exports to the United States equaled to 104 million USD in the same period, which constitutes 4.7% of Georgia’s overall annual export figure. Western countries are even more prominent when it comes to foreign direct investment in Georgia. According to the National Statistics Office of Georgia, EU member states invested 390 million USD in Georgia within the first three quarters of 2015 – 38% of total foreign direct investment. Investments from the United States amounted to 28 million USD (2.8%), while Russian investments equaled to 37 million USD (3.7%) in the same period. Russians are far behind the main investor countries in Georgia, such as Azerbaijan (38%), Turkey (11%) and China (4.7%). The source of the statement

Archil Chkhoidze, leader of Neutral Eurasian Georgia: “Georgia receives no assistance from the West. In contrast, the West is supporting LGBT groups; supports and invests serious amounts of money to bring Georgia’s education system down… the United States could advance the Georgian economy if it really wanted to help… the grape harvest is a problem for Georgia each year. The state is incapable of buying grapes with proper price. The same happens with respect to citrus fruits. Simply put, if the United States could purchase all of those products from Georgia and send them to Afghanistan, where the US and Georgian militaryforces stand together, it could get a lot of support among the Georgian public… Also, although Russia is an occupant country, 400-500 million USD are sent from Russia to Georgia annually, which is 6 times higher than money transfers from the United States; 90% of Georgian goods are also sold in Russia; Georgian business gets benefit from Russia, not the United States.”